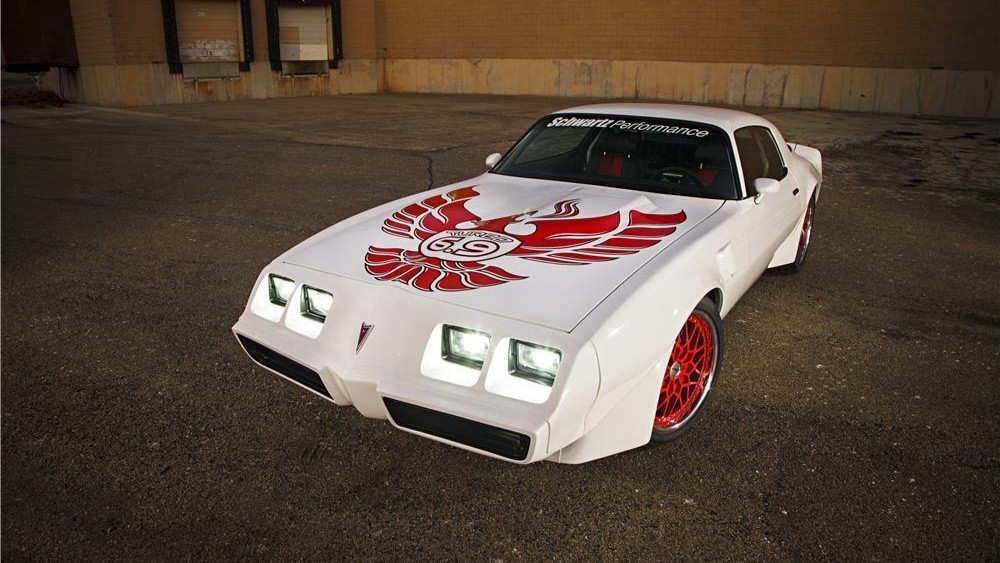 The Pontiac Trans Am is among America’s more revered performance cars of yesteryear, particularly the second-generation turbo. But that 301 cubic inch V-8’s 210-horsepower seems rather paltry by today’s high-output standards. Fret not, Screaming Chicken fans. This little gem just popped up on eBay and it’s a doozy.

It’s an 1981 Trans Am that’s been completely overhauled by Schwartz Performance out of Woodstock, Illinois, which poured more than $300,000 worth of upgrades (that amount includes the 2,200 hours of labor, mind you) into the belly of the beast. Gone is the stock V-8, replaced by a 6.9-liter, twin-turbo LS9 iron block with forged internals, mated to a Bowler 4L85e automatic tranny. That’s good for 1,300-horsepower (1,040 to the wheels), and if the listing is to be believed, it’ll hit 200-plus miles an hour. There’s a whole new underbody frame, a roll cage, adjustable coil-over suspension, custom exhaust, and some choice Forgeline wheels, all of which give the Trans Am a mean and clean look.

1981 Pontiac Trans Am  Screengrab via eBay

The price of this beauty of a restomod? $160,000 or best offer. That’s nothing to blink at, but for the right collector, this is likely a steal. Especially when you consider that Smokey and the Bandit recreations—ones that only produce 600 horsepower—have sold for as much as $275,000 in recent auctions.

If you’re hankering for a Trans Am recreation but are hoping that the donor car is more modern, you can also check out Trans Am Worldwide. The Tallahassee-based outfitter takes fifth and sixth-gen Camaros and custom cuts T-tops before adding a modern front and rear fascia to mimic what a new Trans Am would look like if GM were still producing them. Under the hood, a supercharged LS9 that’s good for 1,000 horsepower. Check out one of the company’s creations, the 455 Super Duty, below.