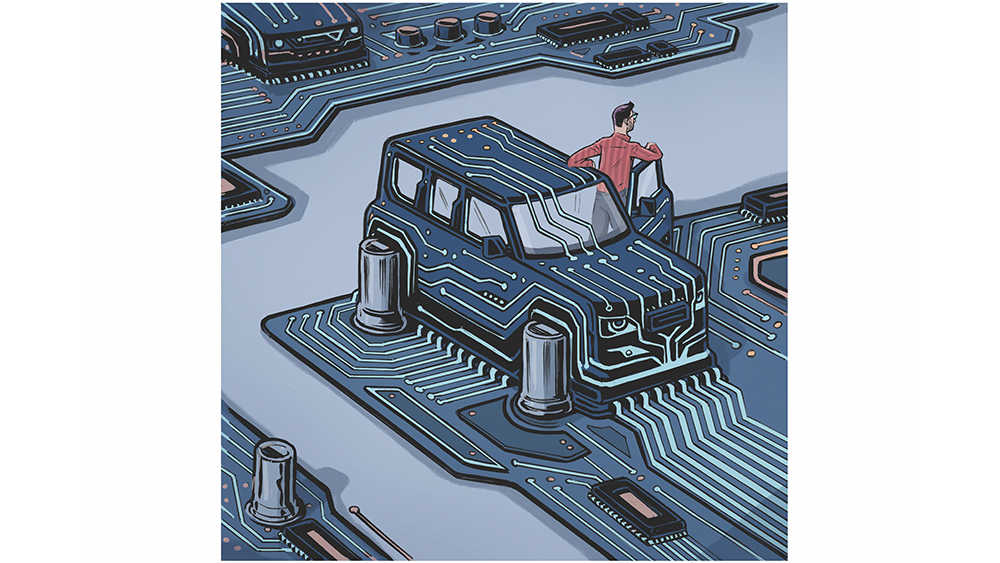 A confession: Until recently, whenever talk of semiconductor shortages came up, I was under the impression that most cars made do with just a handful of the things.

I say a handful. One seemed like it would be enough: one car, one engine, one big fat semiconductor. My estimate was a little short. Some cars come loaded with as many as 3,000.

Semiconductors—aka microchips—are big business, as you probably know. According to an organization called World Semiconductor Trade Statistics, more than 932 billion of them were made in 2020, a number so vast I don’t even know what to compare it to.

Instead, some math. Of those many billions, half are absorbed by electronics while another 15 percent go into the automotive industry, equating to about 140 billion chips. The world turned out 78 million new cars in 2020, which would give an average of around 1,800 chips per new car. By any measure, that’s a very big handful.

But even at those numbers, there still aren’t enough to go round. Demand for new cars is still higher than the supply of microchips can keep up with, sending delivery times into a spin. In September, a friend of mine took delivery of a car he’d specced in January. By the time it finally arrived, he’d forgotten what color he’d chosen.

He was lucky. If he’d ordered a Land Rover Defender, he might have waited 12 months. For a Porsche Taycan, longer still. If he’d gone for a Tesla Model X Dual Motor, he could have been kept hanging for up to two years.

If that’s dispiriting, the advice on beating the wait is worse. Compromise on trim tends to be the consensus, which is tantamount to saying you should buy something you don’t really like. And that’s no advice at all.

Even more depressing, car manufacturers seem to think that because this is now normal, we must be okay with it. The Polestar 3, an all-electric cheaper rival to the Porsche Cayenne was announced in October. It looks very good.

But no one will know how good until. . .well, Polestar has said first deliveries won’t start until Q4 2023 and its US production site might not yield any cars until 2024.

Will we wait? Probably. Marques are well aware of the general public’s obsession with new and shiny things, and the particular school of thought that newer and shinier (and bigger and more expensive) always means better seems unlikely to lose momentum anytime soon.

But if the conversation I find myself having increasingly often is anything to go by, there’s an alternative school gaining traction alongside it. And it’s this: These new vehicles we’re sitting around waiting for aren’t much fun. They’re very well made, but because they’re stuffed full of chips, they’re also enormously clever, thinking harder, faster and far more cautiously than we ever could. But in doing so, they’re slowly making us passengers in our own cars.

Early in the fall, I tested BMW’s new i4, a fully electric gran coupe. It’s a fantastic machine in myriad ways, engineered just about to perfection. But more than once, it scared the life out of me, braking unexpectedly with bone-shuddering urgency, apparently convinced I was about to run over a cat that wasn’t there.

The effect was that I didn’t feel entirely in control. And that isn’t nice to feel—or to admit.

This isn’t a BMW thing. The feeling is everywhere. I’ve driven Aston Martin’s ferocious DBX707, Porsche’s belligerent Cayman GT4 and Bentley’s sublime Continental GT V8 during the past few months. All fabulous. But in each one I had the uncanny sense that I wasn’t fully the master of my own destiny. Something was always interfering: thousands of those ruddy chips.

I was talking to a friend who owns a car magazine about these drives recently, and he looked at me blankly. “I haven’t driven anything new for years,” he said a little too dismissively, reminding me that the most recent vehicle he’d turned a camera on was the 1971 Maserati Ghibli.

Similarly, another pal who runs a production company making fly-on-the-wall documentaries told me the last set of wheels he enjoyed driving was the Mercedes SL he’d had when he was first married 20 years ago.

Now he’s looking for a new car, and I’m trying to persuade him to buy a Porsche 911 from the 997 generation, built between 2004 and 2013. If I were him, I’d start researching the GT3 iteration, introduced in 2006. Once described as “the best handling car in America” by Motortrend, it could do zero to 60 mph in around four seconds and stopped short of 200 mph by a whisker. And the best bit? A manual gearbox, one operated exclusively by a human being.

But he’d be wise not to kick too many tires. Porsche pushed out 213,000 units of the 997, but low-mileage examples in pristine condition don’t grow on trees. And prices are going up. According to Classic.com’s tracker, in March 2021 average sales prices of the GT3 were hovering around $87,000. By the end of October this year, that figure had risen to $114,000.

Why the pattern? A yearning among a new generation of middle-aged car buyers for the cars that were out of reach when they were just starting out? Sure, why not. But that’s overly simplistic. Far more pertinent is that these models are from the last era of true driver’s cars—that, if the mood really struck you, could be driven into a wall without a microchip chipping in. From a time when the driver’s brain counted for more than the car’s. And the thing about the driver’s brain? It’s so good, they need only one.

Robin Swithinbank is a frequent contributor to The New York Times, The Financial Times and GQ. He writes from the UK.