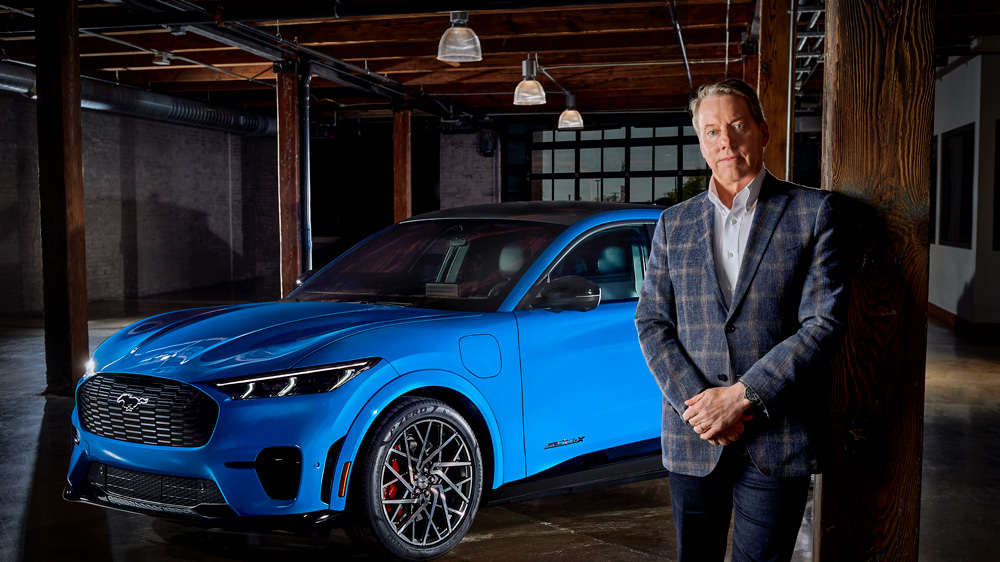 Ford is betting that muscle car enthusiasts are ready to go electric with the new Mach-E, a five-seat SUV inspired by the Mustang—with the looks and the performance to match.

“For a long time my two passions were diametrically opposed,” says Bill Ford (pictured above), the company’s executive chairman and great-grandson of founder Henry Ford. “If you wanted to be green you had to give up performance, and if you wanted performance you couldn’t be green. That’s not true anymore. We finally created a new Mustang where it all comes together.”

But it almost didn’t happen. When Ford set out to make its new electric crossover, it was designed be to a mere compliance car—basically a wagon version of the Focus EV that would meet increasingly stringent emissions regulations. The SUV that would later become the Mach-E was well into its development when executives pulled the plug. “It was obvious we had to do something different,” says Ford North America president Kumar Galhotra. “We had to do something that stood out.”

With Tesla still going strong and luxury brands like Porsche and Audi challenging the notions of what electrified sports cars can be, it’s logical that the maker of America’s most beloved pony car would jump on that (battery-powered) bandwagon. In its fastest configuration, the Mach-E GT can dash from zero to 60 mph in the “mid-three-second-range” according to Bill Ford, who points out that’s on par with the Ferrari Portofino. “And we all know how Ford likes to beat Ferrari,” he quips, referencing the famous rivalry between the two marques at the 24 Hours of Le Mans in 1966.

Jason Castriota, then on the design team and now global brand director for Ford’s battery electric vehicles, fought to make the vehicle a Mustang and spearheaded the customer research that led to its key design elements. “Moving from a compliance play to Mustang-inspired design generated enormous enthusiasm and inspired the team,” Castriota remembers. “But the decision to make this vehicle a true Mustang was by far and away the most controversial and daunting task.” The Dearborn design team took about a year to develop and finalize the new design, which, despite its size and footprint, looks every bit the American icon it was meant to emulate.

Classic muscle-car proportions are courtesy of the new rear-wheel-drive platform, which allows for a longer wheelbase, bigger wheels, and a longer dash-to-axle ratio (that long hoodline that makes classic sports cars look so sexy). Design cues that make the Mach-E part of the Mustang family include its wide-mouthed front grille, distinctive tri-bar headlamps and tail lights, and muscular rear haunches. “One of the things that makes this a very emotive product is the depth of sculpting in all the surfaces,” adds Gordon Platto, chief designer for Ford’s truck lineup. To keep the attention on those surfaces, designers used push-buttons instead of door handles and blacked out the roof rails to help disguise the crossover’s height.

The model will have a range of up to 300 miles per charge, depending on variant.  Photo: Courtesy of Ford Motor Company.

The interior is dominated by a Tesla-esque tablet that also has a rotary knob, as Ford designers tell us that customers wanted something tactile in addition to the touchscreen. Novel storage solutions include the Mach E’s purse/bag holder beneath the central armrest and a tray beneath the center stack that keeps phones within easy reach. In Mustang fashion, the Mach-E gets a sport steering wheel and heavily bolstered front seats, while backseat passengers get plenty of head and knee room. Under the hood there’s additional storage space, which is outfitted with a drain and two cup holders so that, as one Ford designer suggested, “you can fill it with ice, go tailgating, and hose it out later.”

The interior features a Tesla-like tablet with a rotary knob.  Photo: Courtesy of Ford Motor Company.

Most versions will be available with a choice of rear-wheel- or all-wheel drive configurations. We won’t see the GT until spring of 2021, but the rest of the lineup is expected to hit driveways toward the end of next year or early 2021. Buyers can reserve a Mach-E now on Ford’s website with a refundable $500 deposit.