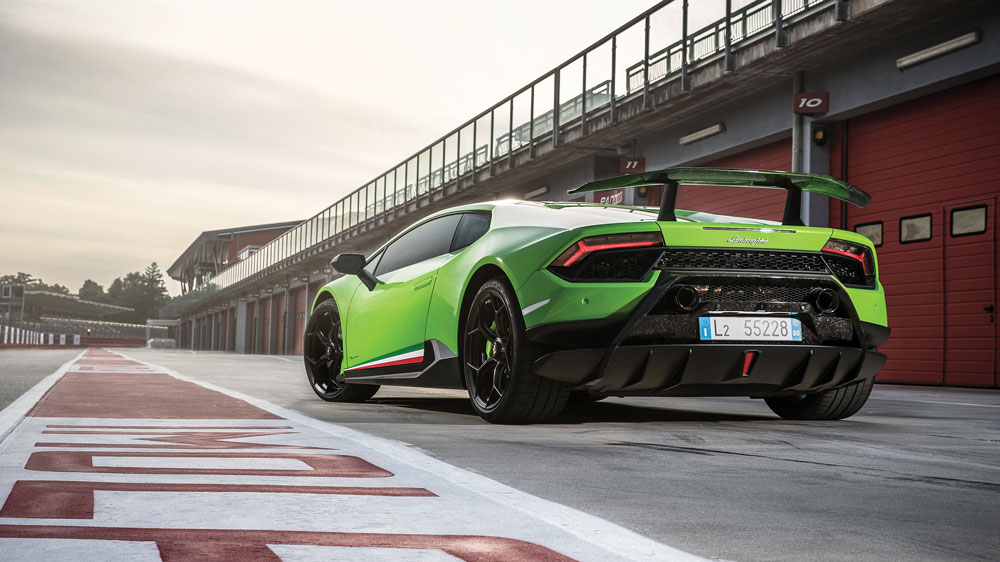 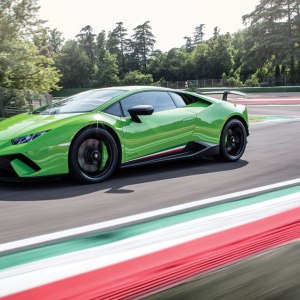 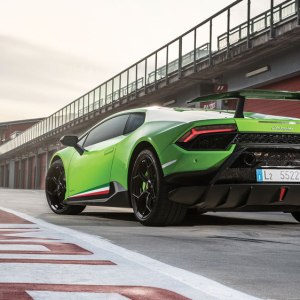 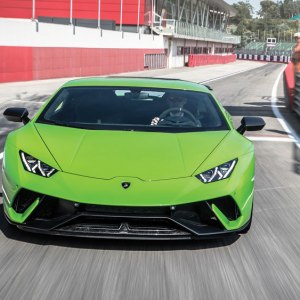 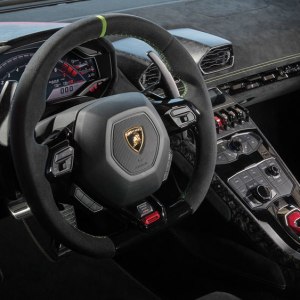 (Editor’s Note: We can’t keep the secret any longer. The Lamborghini Huracán Performante took top honor as the 2018 Robb Report Car of the Year. But before the official evaluation of the winner hits newsstands in our February issue, the following article articulates what it’s like to drive Lambo’s latest, as shared by automotive journalist Basem Wasef.)

On October 5, 2016, a heavily disguised Lamborghini Huracán Performante broke the production-car record at Germany’s Nürburgring Nordschleife racetrack with a lap time of 6 minutes, 52.1 seconds. Boasting advances in engine output, suspension tuning, and aerodynamics, the Italian supercar surpassed the Porsche 918 Spyder’s previous record by 5 seconds. The sophisticated hardware behind Lamborghini’s high-performance spin-off was key to its record-setting run, but an equally critical component was the man behind the wheel. Marco Mapelli, a test driver for Lamborghini, coaxed the landmark performance out of the 640 hp two-seater thanks to his years of experience in formula and endurance racing.

Understanding the intricate relationship between a car’s strengths and weaknesses—and how to exploit those qualities with proper driving techniques—is key for any driver who wants to extract the most from a vehicle. Such prowess is especially important when piloting an ultrahigh-performance car like the Huracán Performante. In an attempt to better wrangle Lamborghini’s latest raging bull, Robb Report recently participated in the marque’s Accademia, a training session that allows owners and enthusiasts to delve into the brand’s portfolio.

The hands-on training sessions are conducted at tracks like Belgium’s Spa-Francorchamps, Japan’s Suzuka Circuit, and Australia’s Phillip Island Grand Prix Circuit. Our event was at the 3.2-mile-long Autodromo Internazionale del Mugello Circuit in Italy. The track is nestled in the rolling hills of Tuscany and hosts Grand Prix motorcycle racing, World Superbike competitions, German Touring Car Championship races, and Formula 1 testing. Known for its dramatic elevation changes, challenging high-speed corners, and lengthy straightaway, the Mugello Circuit is a less-than-ideal locale for novice drivers. For drivers comfortable with the extreme capabilities of a race-worthy street car, however, the track is an outstanding place to gain a deeper discernment of what an exotic can do.

Among the Lamborghini Accademia’s arsenal of automobiles is the Aventador S (starting at $417,650), a V-12 flagship with dramatic scissor doors and an undeniable presence. However, the star of the show during our session was the smaller and lighter Huracán Performante (starting at $274,390). This is a more functionally focused fire-breather whose lineage from the company’s GT3 and Super Trofeo racers makes it closer to a street-legal competition car than a high-powered boulevardier.

As I learned at a morning briefing, the Performante gains several advantages over the standard Huracán, including a sharper suspension and stability-control system, an increase of 30 hp and 29 ft lbs of torque, and the loss of about 88 pounds of weight. However, the Performante’s key innovation is the way in which it manages the wind. While sports cars have long utilized spoilers and flaps that actively lift and retract to alter their aerodynamic profiles, the Performante’s Aerodinamica Lamborghini Attiva system takes that concept a step further through the strategic management of airflow. Forward flaps leverage downforce at the front end as Lamborghini’s “aero vectoring” at the rear diverts airflow to either side of the vehicle, creating downforce on the inside wheels during a turn. This feature enables greater cornering speeds with less steering angle and reduces the overall slowing effect of downforce. Through the straights, the system reduces drag in order to boost top speed.

It wasn’t long before our small group emptied from the conference room and moved to the track, performing the first iteration of a ritual that would be repeated eight times on the first day and six on the second: Strap on a helmet, climb into a Performante, adjust the seat, mirror, and steering wheel, and make sure the communications radio is plugged into your lid. Following a cue from the instructor in the lead car, I clicked the carbon-fiber paddle to shift the car into first gear. The naturally aspirated 10-​cylinder engine rumbled through the pits before I accelerated hard onto the track’s straightaway.

Keeping pace with the instructor was a challenge throughout the 2-day program. Equipped with Pirelli’s competition-spec P Zero Trofeo R tires—and piloted by a seasoned professional—the lead car played mechanical rabbit to the chase car’s greyhound, always ahead and just out of reach. Fueling the fire was the one-way communication to the chase car. By monitoring the rearview mirrors while negotiating the course at speed, the instructor was able to provide remarkably detailed real-time feedback on a student’s racing line, braking technique, and throttle use—multitasking at its finest.

Lamborghini’s instructors, who include pro drivers Riccardo Agostini and Sarah Bovy, augment the experience with onboard data recorders. Following hot laps on the track, driver and instructor analyze point-of-view camera footage, a graphic representation of the car’s instrumentation and gear selection, and visual indicators of throttle and brake positions on a flat-screen monitor to see in explicit detail where improvements can be made. Smoothness and finesse are emphasized over brute force, and the instructors help the students shave seconds from their times throughout the day.

After negotiating Mugello’s 15 corners during different sessions, I became acutely aware of several aspects of the Performante. For starters, its driving dynamics feel significantly more focused than those of the standard Huracán, with a sharper ability to turn in to a corner and considerably greater levels of mid-corner grip. But the car’s flow throughout the process also felt different. Whereas the humbler Huracán builds speed with an organic linearity, the Performante’s trajectory becomes somewhat segmented by the active aerodynamics. Throw it into a corner and it claws down, grasping at the tarmac until its weight and momentum shift slightly and some of the tire slip transitions into greater grip.

Because the downforce ramps up in a not-quite-linear fashion, reaching the Performante’s limits can require a leap of faith. Indeed, comprehending and controlling the Huracán Performante’s vast potential is not a task for the faint of heart—and all but impossible to safely do on public roads. But with Lamborghini’s Accademia, one quickly discovers why, when it comes to handling, the Huracán Performante may now have pole position in Lamborghini’s pantheon.