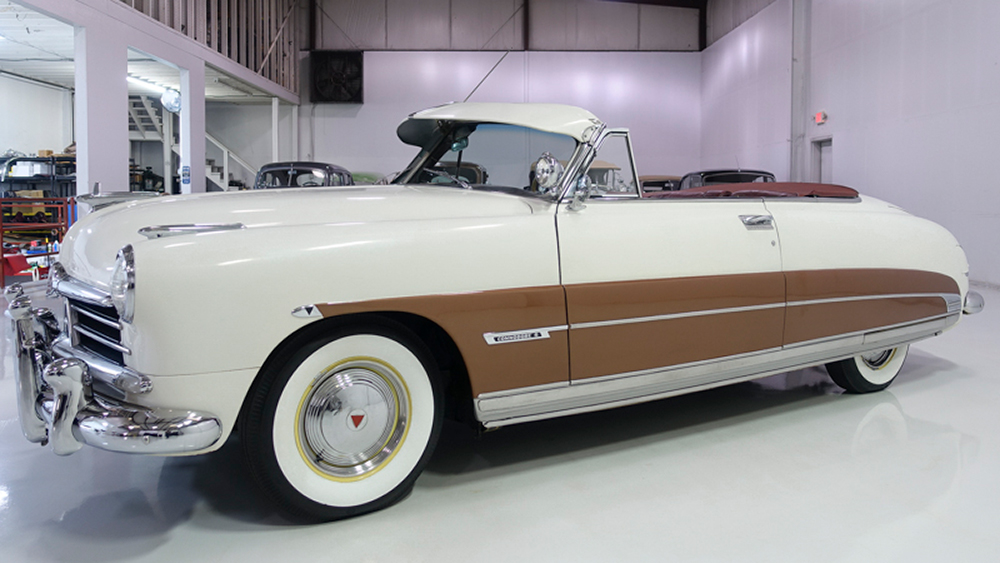 Steve McQueen had a thing for Hudsons. The Bullitt actor owned more than a few, including a 1953 Hudson Hornet, which just went under the hammer a second time for a profit of $100,000, but this 1950 Hudson Commodore Six Brougham Convertible may be the coolest of the King of Cool’s, and it’s for sale from Daniel Schmitt & Co.

It was the only Hudson convertible McQueen owned, and that white over Aztec brown with a red interior and beige top colorway is particularly choice. But what makes it special is under the hood. “It’s got a Twin H-Power engine,” says Michael Dyer, research director for Schmitt, “which isn’t the original engine. The story is Steve wanted to modify it to his standards, which were speed and power.” So in went a 308-ci inline-six Twin-H, which was plucked from the Hudson Hornet. That souped up engine was good for up to 170 horsepower, depending on the tune, up significantly from the Commodore’s stock engine, making it an early sleeper. Pure McQueen.

Schmitt & Co. got McQueen’s Commodore from an auction last in the fall, and notes it’s very much as it was when McQueen himself owned it. “It’s not restored, so there’s patina, and some minor imperfections, but it’s neat because you can touch this steering wheel and realize that Steve touched the same wheel,” Dyer says. Dyer’s research points to the Hudson being something that McQueen drove around Los Angeles daily, as a copy of the registration with the Commodore’s chassis number comes back to a studio in LA that McQueen owned or was involved with. “We spoke to a friend of his who said Steve owned so many cars, he probably wasn’t able to keep track of all of them because they were all over the city,” Dyer says. At $149,000, this Commodore may be a steal, when you factor in how much McQueen’s other Hudsons have commanded at auction.

Also for sale from Schmitt is a 1935 Chrysler C2 Airflow Imperial Eight, which came from Carroll Shelby’s estate. “Carroll and Steve were friends, who often went racing together and after Steve passed in 1980, Carroll bought the Airflow through an estate auction in Las Vegas in 1984,” Dyer explains. “It’s a rare car, with only 2,400 originally built, and I’d imagine that less than a quarter exist today. It’s completely stock except for one cool detail: it has a Shelby shift knob,” Dyer shares. “Clearly Carroll did that himself, and it’s a nice nod to the incredible provenance of this vehicle.” The C2 Airflow is also on offer for $149,000, which may be even more of a bargain than McQueen’s Hudson given the ownership by two of the biggest automotive icons.