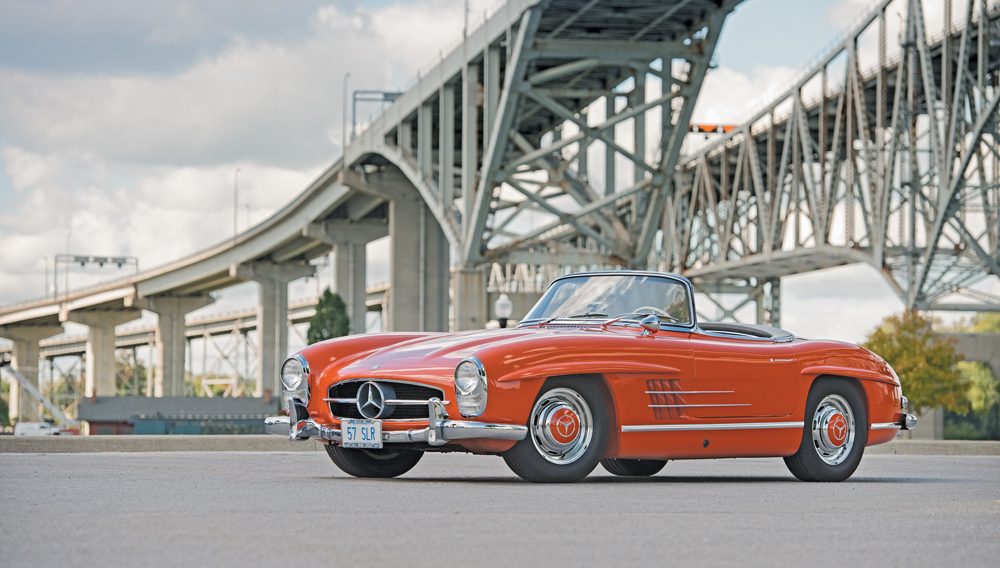 Five years ago, Peter Fodor started a hunt. As a serious collector of vintage cars, he knew he lacked an essential piece: a Mercedes-Benz 300 SL Gullwing. From the roof-hinged doors and iconic lines to the speed and engineering that surpassed any car of its era, the Gullwing is a rare bird indeed, a classic supercar that is still so beautiful and so relevant that Tesla is cribbing its design ideas.

An admittedly picky man—by profession, Fodor is a plastic surgeon in Los Angeles—he spent years trawling auctions and classic-car sales across the country. He purchased one Gullwing only to sell it partly because it was too perfect to drive. Finally, last August, he landed his ideal: a luminous red 1955 Gullwing that he does not mind getting dirty as he blows down the highway.

“Just opening those Gullwing doors is a very special feeling,” Fodor says. “You can’t help thinking about the old Italian Mille Miglia when Sir Stirling Moss was racing those cars. Every button on the dashboard is like a Swiss clock; the click they make is so fresh and special.”

Now, when he swings down the doors and hits the road, he sits in a work of art as intricate as a Fabergé egg, perhaps the most historically significant model Mercedes-Benz ever produced—and without doubt, one of the hottest cars on the market.

In just the last year, prices for the 300 SL Gullwing and its sister car, the 300 SL Roadster, have skyrocketed. The average price of a Mercedes-Benz 300 SL sold at auction has almost doubled since 2011, from $705,024 to $1.35 million, according to data collected by Hagerty, which specializes in insurance for collector cars. Auction houses Barrett-Jackson, Gooding & Co., Russo and Steele, and RM all sold 300 SLs in 2014, with high bids ranging from $1.1 million to $2.5 million. In each of the last three years, Barrett-Jackson has sold a Gullwing for at least $2 million, including one formerly owned by Clark Gable for $2.035 million in 2013.

In January, Barrett-Jackson and RM Auctions will each offer noteworthy 300 SLs, with prices expected to hold steady at those stratospheric heights.

Not bad for a car that was almost never made.

At the end of World War II, much of Mercedes-Benz’s production facilities lay in ruins. Yet as the company rebounded, it remained intent on continuing its racing legacy. Asked to design a racecar derived from the 300 series sedan, engineers realized that the 300 SL’s tubular space frame construction resulted in doorsills so much higher than usual that a normal hinge was impossible.

And thus in 1952 were born the Gullwing doors, hinged on the roof and so named because they look like a seagull’s wings when they are open. That year, the racecar won so much so fast—the 24 Hours of Le Mans, the Eifelrennen at Nürburgring, La Carrera Panamericana—that customers clamored to buy a street version. Company officials said no. But a New York City Mercedes importer named Max Hoffman traveled to Germany and convinced the company’s leaders that he could sell the car in the United States.

The production version of the Gullwing debuted at the 1954 auto show in New York with a sticker price of about $6,800. With a low-slung body and sleek lines, the Gullwing was beautiful, fast, and fun to drive, an eye-popping blend of aesthetics, engineering, and performance. “It looks fast just sitting there” is still a common description, and the car has a popular appeal that belies its sophistication. With the first-ever direct fuel injection in a production car and tubular space frame of autogenously welded steel tubes instead of a traditional chassis, it gained a reputation as a technological marvel.

The doors gave the Gullwing an aesthetic distinction no other marque could match. Sitting in the car and pulling the doors down to close them is like strapping into a jet fighter and sealing the canopy. They have been copied over the years by marques ranging from DeLorean to Tesla, which will release its Model X, an SUV with gullwing doors, next year. But the doors on the 300 SL were always more pretty than practical: The windows do not roll down, and the original cars have no air-conditioning. The car makes some people feel claustrophobic, and on a hot day, driving one is like driving a barbecue, says Craig Jackson, chairman and CEO of Barrett-Jackson Auction Co. The windows can be taken out, but that is hardly a good solution.

In 1957, the company announced the end of the Gullwing era and the birth of its sister car, the Roadster, whose production continued until 1963. By revising the frame, the Roadster’s engineers made conventional doors and convertible tops possible. Yet Gullwings and Roadsters—both known as 300 SLs—are so closely related that when Fodor started his hunt, he would have been content to buy one or the other.

Both 300 SLs have been pursued by discerning collectors throughout their history, but in the last few years their presence and value at auctions in the United States have exploded. Through mid-September, 17 Gullwings and 20 Roadsters had been sold at auctions this year, a 20 percent increase over 2013 and double the total from 2009, according to Hagerty.

For the first time, the Roadster has surpassed the Gullwing in average price, $1.65 million compared with $1.61 million. Although those figures represent only May to September 2014, it is significant that the Roadster has closed the long-standing gap in price over the last few years.

Several forces propel the popularity of 300 SLs. The first and most important: The quality endures, as the models are universally recognized as international blue-chip collectibles. “If you ask anybody—and I mean anybody, any knowledgeable car collector—to give you the top 10 cars of all time, I guarantee you, every single list will have a Gullwing,” says Bruce Meyer, founding chairman of the Petersen Automotive Museum in Los Angeles, whose first collector car was a 1955 Gullwing that he purchased in 1964. He also owns a 1957 Roadster. “They’re just iconic cars.”

Mercedes produced 1,400 Gullwings and 1,858 Roadsters, which means enough of them exist that they can be found but not so many that they flood the market, a happy medium between, say, Corvettes and coachbuilt Ferraris. “If they had made 100 instead of 1,400, they would be selling for $20 million,” says Meyer, referring specifically to Gullwings.

Another factor in the lasting popularity of 300 SLs is that the marque operates two Mercedes-Benz Classic Centers, one in Irvine, Calif., and one near Stuttgart, Germany. The centers restore and sell vintage Mercedes as well as provide expertise, parts, and a sense of community for enthusiasts, all in support of the company’s history. “That allows us to continue to drive one of the most significant sports cars of the 1950s,” says Bob Sirna, who owns and races a souped-up 1955 Gullwing and tours with a 1957 Roadster.

The Gullwing and Roadster are among the most popular vehicles for touring, if not the most popular, because they are reliable and easy to drive while giving up no ground in performance. Sirna, a past president of the approximately 650-member Gull Wing Group International, recently drove his Roadster from San Francisco to the group’s convention in Banff, Alberta, Canada, and on to South Dakota, a trip of about 2,600 miles.

“The 300 SL Gullwing is in fact the closest thing to a racecar Mercedes has delivered to the public since World War II,” he says. “It provides the performance equivalent to the car that won Le Mans in 1952. It can drive down the road at 140-plus for hours and hours on any highway in the world.”

McKeel Hagerty, president and CEO of Hagerty, tells of cruising in an Austin-Healey at 100 mph in a rally when a 300 SL passed him. “It didn’t blow my doors off, but it pulled easily by me. It looked so smooth and so quiet,” he says. “My joke was, ‘Those people looked like they were listening to Wagner and drinking tea as they came by.’ It’s just this wonderful and refined piece of German engineering.”

What is next for these incredible cars? The “land grab,” as Hagerty puts it, will continue, as owners sell in search of a big profit and collectors like Fodor look for the piece that enhances their collections.

Examples abound. The Scott Grundfor Co., renowned for its work on 300 SLs, unveiled a 1955 Gullwing in mid-September with a red interior and a white paint scheme so beautiful, it makes you cringe at the thought of birds, bugs, rain, and anything else that might besmirch its glow. In announcing the sale, Grundfor called it “one of the very best 300 SLs we have ever had the privilege to offer for sale.”

Jackson says his company was offered a half-dozen Gullwings in 2014 but chose only the best one to sell: a sensational silver stunner that went for $2.09 million in January. Barrett-Jackson will offer another Gullwing—this one a silver beauty once owned by Alfredo Peralta, the son of a former president of Guatemala—at its Scottsdale, Ariz., auction in January.

“I think they’ll stay popular. In the high end of the market you’ll see a plateauing, which I think is healthy,” says Jackson, who has owned two Gullwings. “There is a good value there if you look at a comparable-type car that you’ll use as a rally car and an iconic car. I think they were undervalued for quite a while. Part of that probably was people took them for granted.”

The roof-hinged doors are one of the most famous innovations in automotive design, in a car that has many of them. Designer Rudolf Uhlenhaut brought the Gullwing from idea to racetrack.

A racecar made for the road. Its low weight (2,850 pounds) relative to its power (215 hp) explains why it is so fast. The Bosch direct cylinder fuel injection was so ahead of its time that it was not applied to large-scale production for decades.

Grundfor Co. “Every time I think there is, I exceed it.”

Clark Gable, who serviced the car at Mercedes-Benz of Hollywood, where he paid $10.83 for a lube/oil change

Sleek lines create a refined look, and every crease and crevice is immaculate and exists for a reason. Today, such design is called “fully integrated,” but few cars had it in the 1950s.

Considerably more comfortable than the Gullwing because it is a convertible. Some also consider the Roadster better for driving because of improvements in its handling (single-joint swing axle instead of the Gullwing’s double) and disc brakes.

The convertible top is almost as difficult as the notorious Gullwing doors; if it does not fit right, it is like wearing baggy socks, Inase says. Bottom line: The cost is about the same as a Gullwing. “I’d be splitting hairs to quote a difference,” he says.

Natalie Wood, who famously had it painted pink