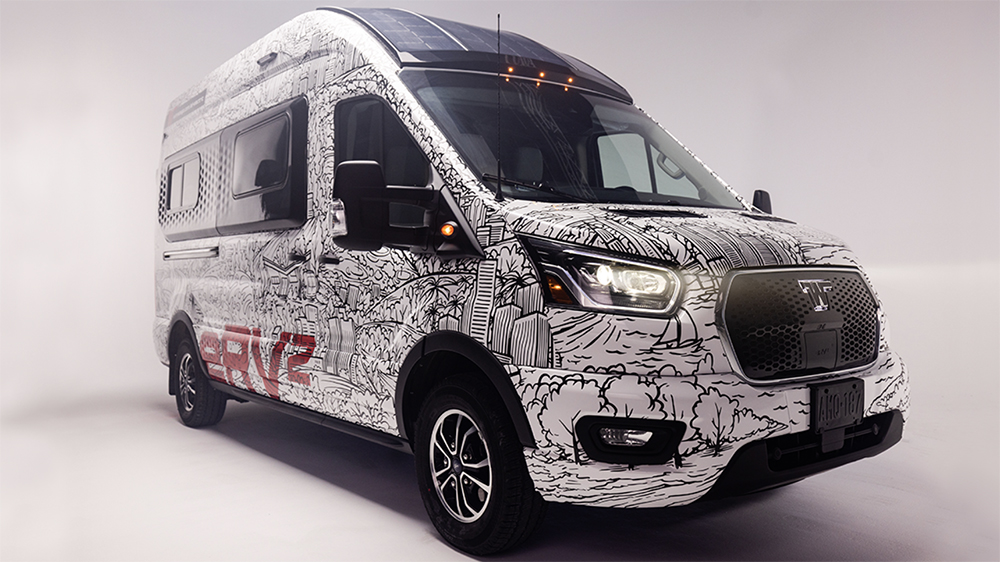 Winnebago wants to bring the electric revolution to your camping trip.

The motorhome maker has just unveiled the eRV2, its second battery-powered concept in as many years. And with the exception of one key area, it represents a significant upgrade over its predecessor, the e-RV, in almost every single way.

Winnebago’s first EV camper concept was built on the bones of a standard Ford Transit van that had its combustion engine swapped out for a battery-powered motor. The eRV2 is more than just another electro conversion; it’s a true EV through and through. Its chassis comes from the all-electric Ford E-Transit, which comes equipped with its original 68-kWh battery pack.

The newer vehicle is more powerful than its predecessor, able to produce 266 hp instead of 215 hp (unfortunately, torque drops from 733 ft lbs to 317 ft lbs). But the boost in power does come at a real cost. The eRV2 has a range of just 108 miles, which is even less than the e-RV’s rather pedestrian 125-mile range. The E-Transit platform does at least allow for DC fast charging, so you’ll be able to fill up the battery to 80 percent in 45 minutes. Winnebago knows that this isn’t enough for more than a short weekend getaway and told Car and Driver a production version would offer improved range.

The powertrain may still be a work in progress, but Winnebago knows exactly what it’s doing when it comes to the cabin. The inside of the eRV2 is covered in recycled materials and features everything you expect, including a kitchenette, an entertaining area that can be converted into a bedroom and a bathroom with a shower and removable toilet. There’s also tons of storage, a climate control system and a WiFi router. Powering all its amenities is the van’s secondary 15-kWh battery. Thanks to that, and roof-mounted solar panels that deliver 900 watts of power, you’ll be able to keep everything running for up to a full week—even when you’re off the grid.

The camper’s name will probably change, but it certainly sounds like Winnebago plans to put the eRV2 into production. The van, which is on display at the Florida RV Supershow this week, is a fully operational prototype, according to the company. There’s clearly some work to be done, but it’s a safe bet that the company’s lineup will include a fully electric camper van sooner rather than later.