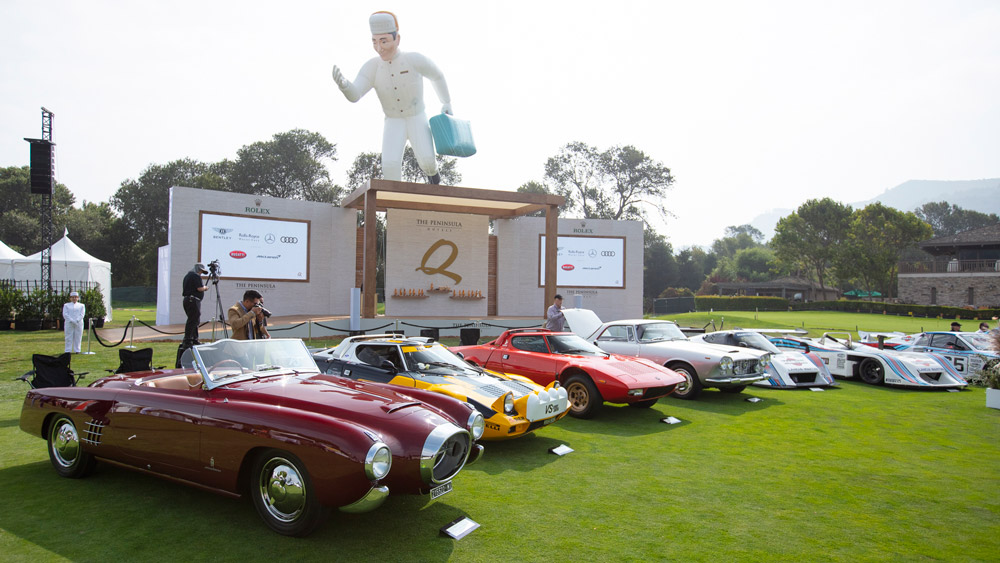 Every August, Northern California becomes the nexus of the world’s automotive industry. That’s when the comprehensive Monterey Car Week unfolds – packed full of worldwide model debuts and the highest-quality concours. Among the latter, one event has become a fast-growing favorite of car makers and collectors alike: The Quail, a Motorsports Gathering. For its 16th running, the car show was held on the lawns of the Quail Lodge & Golf Club in Carmel and attracted more than 5,000 attendees who came to see a field of more than 250 automobiles compete for acclaim in roughly a dozen categories. Here are a few of the top performers.

Built by British marque Riley Limited, the Brooklands Special was developed by J.G. Parry-Thomas and, following the death of Parry-Thomas at Le Mans in 1927, his colleague Reid Railton. Riley racers competed quite successfully in major motorsport events for the next several years.

Lamborghini’s 400 GT was a follow up to the marque’s first model, the 350 GT, after the company was founded in 1963. The 400 GT had two iterations. The first (referred to as the Interim version) featured a larger 3.9-liter V-12 engine than its predecessor, but had basically the same body design.

Robert Ross drives his 1966 Lamborghini 400 GT on the stage to accept the class award for Post-War Sports Cars from 1961-1975.  Photo: Courtesy the Peninsula Signature Events.

Southern California–based Robert Ross brought his Interim example, one of only 23 made, after an exhaustive 2-year restoration by Joseph DeMeo. “I acquired the car in 2001 but it’s a car I first saw in 1967 when I was 12 years old,” says Ross. “You fall in love early and imprint early with a car design that speaks to you, and even though it took decades before I was actually able to acquire one, it was really a dream come true to find one in a garage and resurrect it from what was barely a runner into something that achieved a state of perfection that I think everyone is after when they try to restore a car correctly and accurately.”

The iconic Ford GT40 earned its position in the pantheon of renowned racecars by winning the 24 Hours of Le Mans endurance race a remarkable four times, from 1966 through 1969, and winning the podium trifecta in its debut. As a tribute to the car, as well as the company’s 100th anniversary in 2003, the Ford’s GT was announced and put into production from 2004 through 2006 with 4,038 examples manufactured.

For the second production, which began in 2017, the model features a 647 hp, 3.5-liter twin-turbocharged V-6. The engine is paired with a seven-speed Getrag dual-clutch transmission, a power-train combination that allows the car to travel zero to 60 mph in 2.8 seconds and top out at a sizzling 216 mph.

The winning supercar at Quail is a beautiful blue carbon-fiber example owned by New York–resident Fred Donner. With serial No. 30, it is one of about 1,000 Ford GTs to be made this year.

The Porsche 356 is not only the first production model made by the German marque, but is considered by many to be the most desirable due to its simple-yet-elegant design. Manufactured from 1948 to 1965, the 356 was rolled out in four progressive model productions, including those denoted “A” through “C.” The first, or “Pre A,” included ones with a split windscreen as opposed to subsequent curved front window treatments.

Owned by Mike Malamut, this Porsche was the 1,111th example built by the German marque.  Photo: Courtesy the Peninsula Signature Events.

The one that took top honors amongst its siblings at Quail was one such split-window wonder from 1951. It’s also the 1,111th Porsche automobile to come from the factory. The car, owned by Mike Malamut of California, had a seven-year restoration done by Peter Archibald and now appears in the original color scheme of black with a green leather interior. With its matching number 1500 motor, Malamut’s magnificent Porsche previously earned Best in Class at the Hilton Head Island Concours d’Elegance & Motoring Festival in South Carolina.

Italian automaker Lancia built the Aurelia from 1950 through 1958.  The model, whose moniker came from the Via Aurelia road connecting Pisa and Rome, was produced in several body styles, including a two-door coupe and convertible, a four-door sedan, and a just a rolling chassis for those who preferred their own custom coachworks.

The apex automobile at the Quail was a 1953 Lancia Aurelia PF200C Spider – a prototype concept car based on the Aurelia B52 chassis but with coachworks by Pinin Farina. The car hints at design inspiration from the then fledgling Jet Age with elements such as a chrome-bezel nose that references the F-86 Sabre fighter aircraft, and a posterior fins flanking six exhaust ports.

Owned by Anne Brockinton Lee, widow of the late car collector Bob Lee, the winning Aurelia had originally been presented at the Turin and Geneva auto shows the year it premiered. The results of a 10-year restoration have certainly paid off as the roadster also reigned over its class at the 2014 Amelia Island Concours d’Elegance in 2014. This time out, however, it ruled them all.