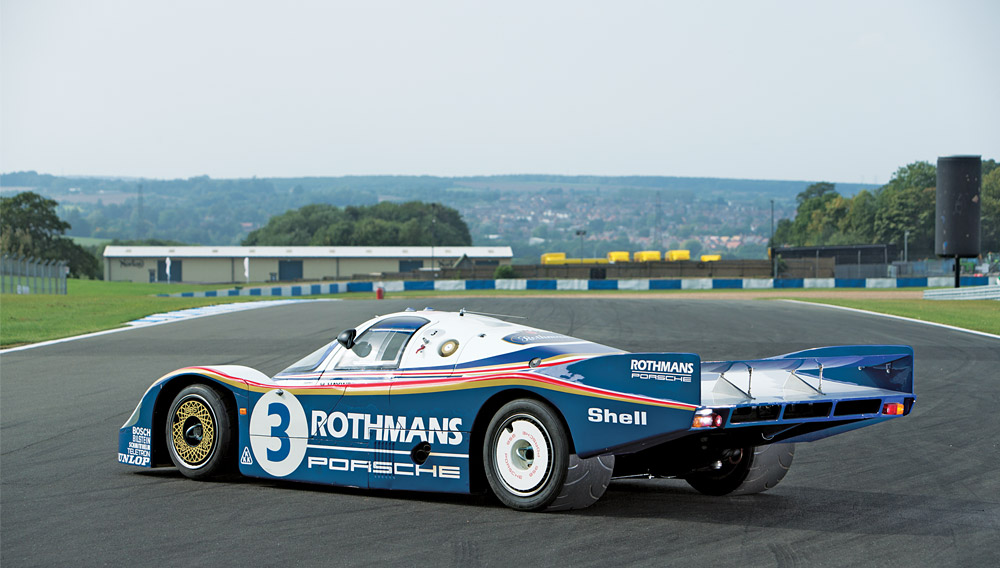 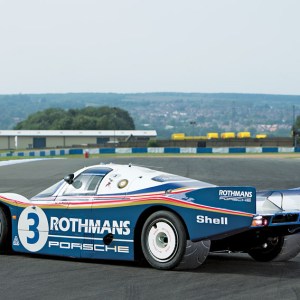 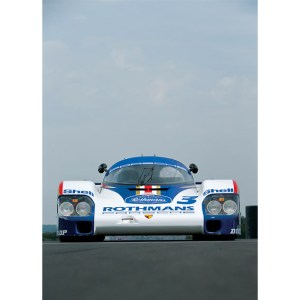 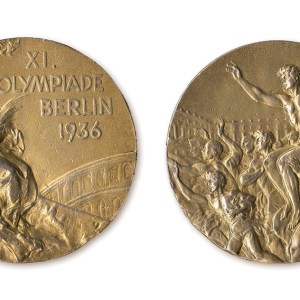 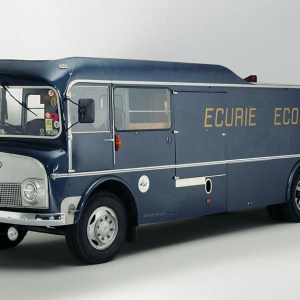 Porsche’s 956 was the German automaker’s first model to feature monocoque construction and it dominated the racing circuit during the early to mid-1980s. Not only did the 956 claim four straight Le Mans victories (from 1982 to 1985), but a trio of them swept the Le Mans podium in 1982 in only the model’s second race. The example that sold in Paris finished third overall that year—a noteworthy accomplishment considering that the car was in ninth place at the halfway point and entered the top three with less than an hour to go in the race.

Following its third place finish at Le Mans in 1982, this particular car (chassis 956-004) entered a number of other races and was piloted by noteworthy Porsche drivers the likes of Derek Bell and Jürgen Barth. The car underwent extensive safety testing (as well as a factory-supervised rebuild) when it was purchased from the factory in 1990. Since that time, the car has seen little use.

SCP Auctions’ annual fall sale of more than 1,000 sports memorabilia items concluded in early December and generated almost $4.5 million. One item—a Jesse Owens 1936 Olympic gold medal—not only stole the show but, with its $1.46 million price tag, accounted for almost 33 percent of the auction’s total revenue. The sale set a new record for the highest price paid for a piece of Olympic memorabilia. Although Owens won four gold medals during the 1936 Olympic Games, this is the only documented example known to still exist. It was purchased by Ron Burkle, co-owner of the Pittsburgh Penguins, who has stated that he plans to organize an educational tour to display the medal (along with William Faulkner’s Nobel Prize for literature, which he also owns).

At the 1935 Big Ten Track and Field Championships, Owens set three world records—and tied a fourth—all in less than an hour. As an encore, Owens traveled to Berlin for the 1936 Olympic Games and promptly broke or equaled nine Olympic records, while also setting three world records in the process. The people of Berlin showered him with praise, even though his domination in the track and field events ran counter to Adolf Hitler’s proclamations that the games would confirm his theory of Aryan racial superiority. But when Owens returned to the United States, he was not greeted with the fanfare that he had enjoyed in Berlin. Instead, Owens reentered a world of segregation. It took 40 years before he was properly recognized for his accomplishments.

Years after the Olympics, Owens gifted this gold medal to Bill “Bojangles” Robinson, who befriended the athlete in the late 1930s and helped him break into the entertainment industry as a way to make a living. The medal remained in the Robinson family’s possession up until this SCP auction.

In his youth, Dick Skipworth ardently supported the Edinburgh-based racing team Ecurie Ecosse, which claimed back-to-back victories at the 24 Hours of Le Mans in 1956 and 1957. More than three decades after those victories, Skipworth acquired an Ecurie Ecosse replica car and began racing it. His zeal was stoked again seven years later, when he purchased the team’s 1960 Commer TS3 three-car transporter, which led him to eventually acquire eight authentic Ecurie Ecosse vehicles. In December, Bonhams auctioned off that entire collection, which commanded £8.8 million (about $14.4 million). The transporter sold for £1,793,500 (about $2.9 million).

Numerous unconfirmed stories are attached to the vehicle following its life as part of the Scottish racing team, including a claim that it was used to haul beer barrels and animal feed. According to another  rumor, when the vehicle was in its most derelict condition it was offered for sale for £15 (and still went unsold). What historians do know is that the specialist truck and bus coachbuilding firm Walter Alexander and Co. began work on the transporter in 1959 and intended it to be as visually captivating as the rest of the team’s racing vehicles.

The carrier was complete in time for the start of the 1960 racing season, and it provided Ecurie Ecosse with both a stylish way to transport its racing vehicles and a dedicated space to work on them. After acquiring it in the early 1990s, Skipworth began the arduous process of returning the transporter to its former glory. When he was done, not only did the vehicle shine as it once did, but it also included new sleeping quarters for the crew.

Of the eight vehicles in Skipworth’s collection that sold in December, his 1952 Jaguar C-Type two-seater commanded the most, selling for £2,913,500 (about $4.8 million). During the 1953 racing season, the car was campaigned by five Ecurie Ecosse drivers—including Jimmy Stewart (a Formula 1 World Championship driver) and Ninian Sanderson (the winner of the 24 Hours of Le Mans in 1956)—during which the car finished on the podium six times out of 16 events.

Subsequent owners continued to race this C-Type, entering it in various historic events throughout the 1970s. The car even spent a brief time in Australia in the early 1980s before being sold back to a Scottish enthusiast. Skipworth acquired the car in 1992, and it became the core of his Ecurie Ecosse collection. “I have come to regard her as the second lady in my life,” Skipworth once said of the Jaguar.

Over the course of its life, this C-Type has raced at the Monaco Historic Grand Prix and has participated in the Mille Miglia Retro, the Goodwood Festival of Speed and Revival, and the Italia Classica. The car has been driven by auto racing’s elite, including Sir Stirling Moss and Sir Jackie Stewart. According to Bonhams’ auto specialists, this C-Type is the most pure of all the cars in Skipworth’s Ecurie Ecosse collection and it comes with the best provenance.

In December, Christie’s sold Bob Dylan’s 1964 Fender Stratocaster electric guitar for $965,000, which topped the auction house’s high estimate by more than $400,000 and set a record price for any style of guitar sold at auction. The sale also included five lots of typed and handwritten lyrics by Dylan; however, only one of those lots—four pages of an early draft of the song “I Wanna Be Your Lover”—met its reserve price, selling for $20,000.

For guitar enthusiasts, this Stratocaster—with its original sunburst finish, alder wood body, maple neck, and Brazilian rosewood fingerboard—ticks all of the boxes. Then, of course, there’s the Bob Dylan connection. As music historians have noted, the 1965 Newport Folk Festival marked the fateful day in Dylan’s career when the musician “went electric.” This was the guitar that he used in that performance, which polarized the masses. Many fans booed Dylan’s three-song electric set, but the free-spirited musician played on. According to Murray Lerner, an American documentary film director and producer, in the 25 minutes that Dylan performed onstage in Newport in 1965, he “redefined the way he looked, the way people would look at him, and the essence of popular music.”

According to the instrument’s provenance, Dylan left the guitar aboard a private plane following the Newport Folk Festival performance. It was found by the plane’s pilot, who contacted Dylan’s representatives in an effort to return the instrument, but his messages were never returned. The instrument had remained in his family’s possession for the past 48 years.

When the hammer dropped for the last time at Bonhams’ fourth annual Las Vegas motorcycle auction in January,

the final winning bid of the night pushed the event’s total sales to $3.3 million—a 30 percent increase from the previous year’s auction. While many desirable bikes crossed the block, the event’s headliner was a 1978 Ducati 900 NCR, which sold for $175,500, 60 percent more than its high estimate. “It’s a fabulous piece of motorcycle history,” says Nick Smith, a Bonhams motorcars and motorcycles specialist. “It was pure as the driven snow, unraced; the wheel was never turned. It is as complete as it was back in the day, which is rare to find for any motorcycle.”

For many motorcycle enthusiasts in the room, the untouched Ducati NCR conjured up memories of Mike Hailwood’s triumphant return to motorcycle racing in 1978. Hailwood had retired from the sport in 1967 with nine motorcycle Grand Prix world titles to his name. But in 1978 he returned to bike racing on a Ducati 900 NCR V-twin to win the Isle of Man TT race. At 38 years old, Hailwood was considered a long shot, but the racing legend proved the critics wrong: He won the six-lap race with an average speed of more than 108 mph, and he set a new lap record speed of 110.62 mph.

Hailwood’s victory was among a select few that elevated Ducati to superbike status. The NCR shop in Bologna produced only 25 racing bikes like Hailwood’s, and, according to Smith, the winning bidder for the example that recently sold in Las Vegas recognized that rarity. “He was a very particular client,” Smith says. “He knew precisely what he was looking at and he was determined to buy it.”

Over the course of a five-day numismatics auction in January, Heritage Auctions sold $64.92 million worth of rare collectible coins, including a 1787 Brasher Doubloon, one of the first gold coins struck in the United States. “The legendary Brasher Doubloon is one of the most important coins in American history,” Todd Imhof, executive vice president of Heritage Auctions, said following the sale. “It’s the first gold coin struck for the young United States and it’s one of only a handful that exist.” The last time that the coin was sold publicly (in 1979), it changed hands for a then-record price of $430,000. This time, the doubloon was sold for $4.58 million.

The coin was created by Ephraim Brasher, a New York silversmith, who lived next door to George Washington. In fact, Washington owned numerous examples of his neighbor’s sought-after silver creations, which speaks to the quality of Brasher’s work. Brasher also worked as an assayer, evaluating the many foreign gold coins that circulated throughout the country during the late 18th century. At the time, gold coins were used primarily in large transactions between bankers or merchants in the country’s major cities. Today, some old, foreign gold and silver coins are marked with Brasher’s trademark counterstamp, which experts believe is confirmation that those coins were of full weight and fineness when Brasher analyzed them.

As for Brasher’s doubloon, the coin weighs 26.6 grams and is composed of 89 percent gold, 6 percent silver, 3 percent copper, and 2 percent of various elements. The obverse design was adopted from the New York state coat of arms, while the reverse includes several elements that also make up the Great Seal of the United States.