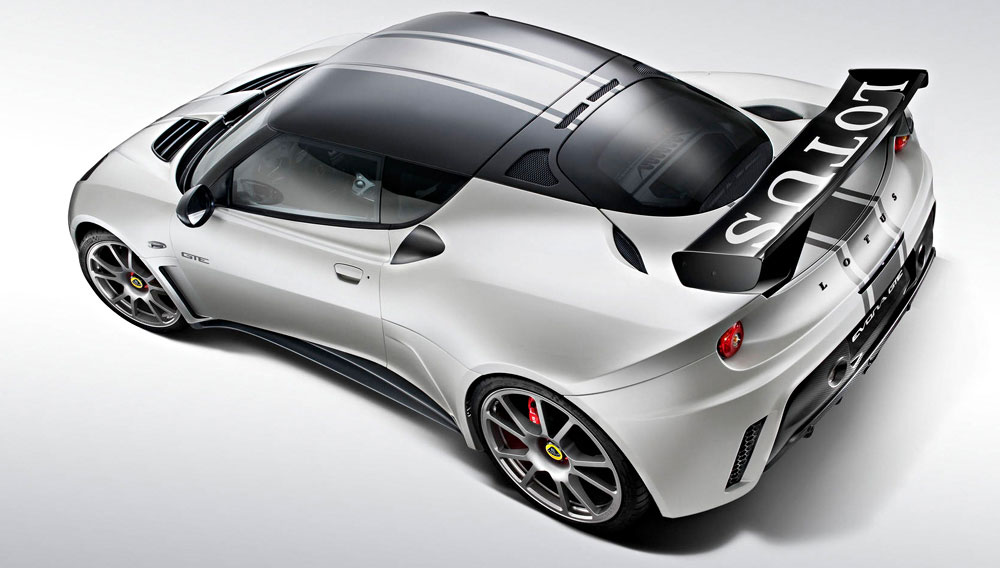 The car features a track-ready suspension and a raft of lightweight but supremely strong carbon fiber composite pieces, including the front and rear bumpers, the doors, and the rear wing, that lower the curb weight by a not-insignificant 232 pounds. And of course there’s power—plenty of it.

The standard Evora, the world’s only mid-engined sports car with four seats, is no slouch in the performance department, motivated by 276 hp from a refined 3.5-liter V-6 from Toyota. And the new, supercharged Evora S ups the ante with 345 hp. But the Evora GTE pushes the envelope, delivering a fearsome 434 hp to the rear wheels through a 6-speed automated manual transmission.

Lotus is coy about revealing performance figures, but it’s safe to assume the GTE’s numbers will be nothing short of scintillating. Bear in mind that the base Evora hustles to 60 mph in about 4.8 seconds and tops 160 mph. The Evora S hits 60 mph in 4.3 seconds and breezes past 170 mph. Yes, the GTE will be one quick Brit.

The road-going GTE was originally planned as a very limited-edition model for the Asian market, but a global outcry from the Lotus faithful prompted the company to reconsider. For Stateside Lotus aficionados, the good news is that the Evora GTE is U.S.-bound, though timing is a bit sketchy and pricing is, for now, a mystery. Expect this top-drawer Evora to outstrip the Evora S’$76,000 sticker by at least $15,000. Consider it the price of supremacy. (www.lotuscars.com)