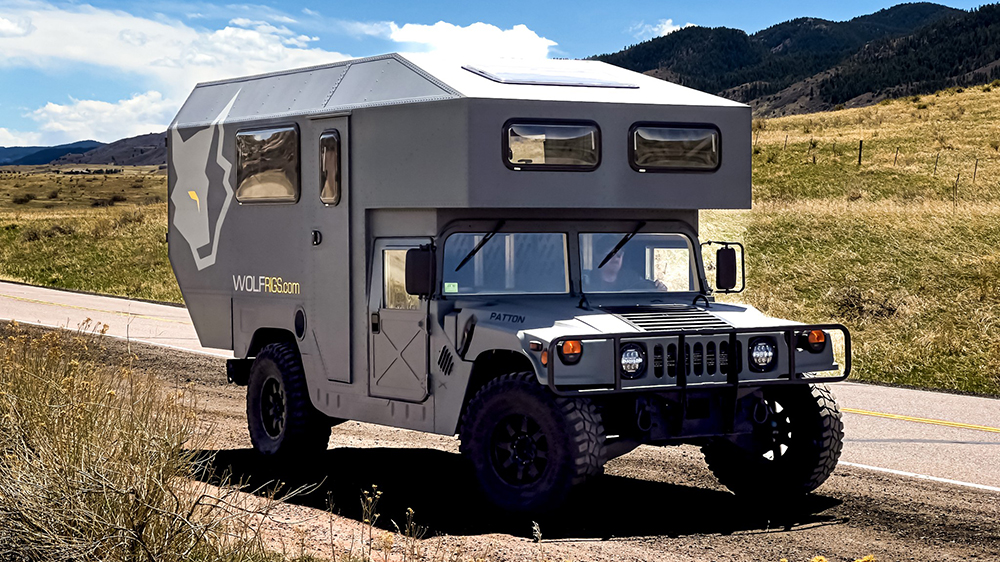 Looking for a versatile camper that really stands out from the pack? Wolf Rigs might have just what you’re looking for.

The Colorado-based overlanding specialists have just launched a new off-roader called the Patton that’s based on the original Hummer H1. Not only can the hulking 4×4 go practically anywhere, it can do so while lugging you, your friends and all of your stuff.

It’s hard to think of a better vehicle to base an overland camper on than the H1. That’s because the iconic SUV is based on the AM General M998 Humvee, a go-anywhere utility vehicle that the US military has been using around the world since the middle of the 1980s. Although the H1 is the more refined commercial version of that 4×4, it’s as rugged of an off-roader as you’re going to find.

Inside the Wolf Rigs Patton

The Patton isn’t just any old H1, though. Wolf Rigg has outfitted it with a giant aluminum camper shell that transforms it into a genuine home on wheels. Inside, you’ll find a surprising spacious cooking area, an extra-large L-shaped lounge with comfortable seating and a residential-size shower equipped with the company’s “patented” hideaway toilet. While the lounge can certainly sleep a person or two, there’s a dedicated area above the vehicle’s seats that has more than enough room for a queen-size bed.

The camper shell isn’t the only thing that separates the Patton from a standard H1. A walkaround video posted to YouTube by the shop says that it swapped out the vehicle’s standard V-8 for a 3.9-liter Cummins inline-six. The mill is connected to an Allison 1000 six-speed automatic transmission and while no power numbers were provided we’d wager it’s a beast. It’s also more efficient than the H1’s original powertrain too. That same video claims the Patton will get 12 mpg in the city and 18 mpg on the highway. That’s not great, but it’s a whole lot better than the 10 mpg average the final H1 from 2006 managed.

Want to take the Patton with you on your next camping adventure? You can reach out to Wolf Rigs now to start building one of your own. While the company’s website doesn’t list a price for the vehicle, its video puts the cost at around $350,000.

Click here to see all the photos of the Wolf Rigs Patton.