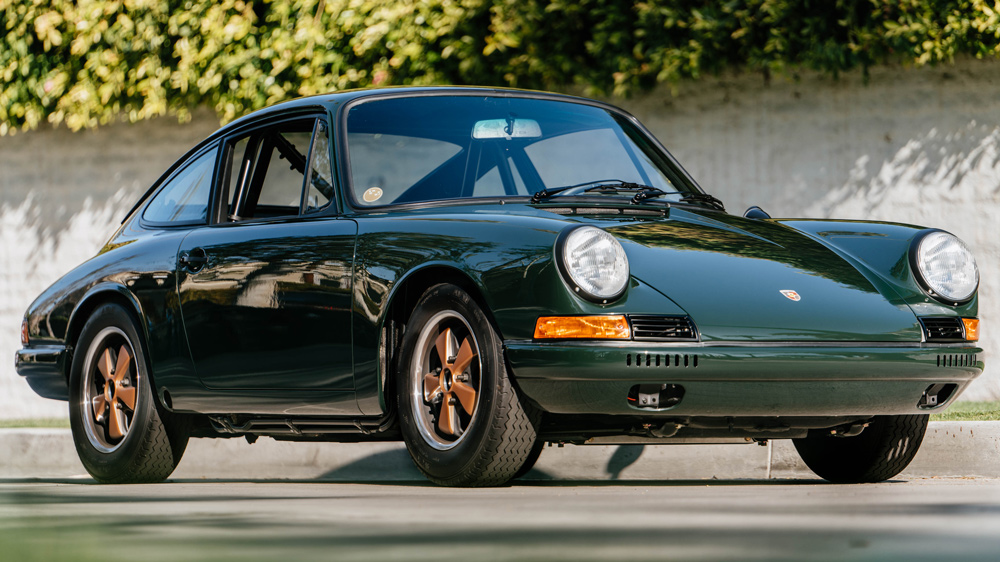 The facility is easy to overlook, situated on a corner off Exposition Boulevard in Los Angeles and blending in with the row of other commercial buildings that have made up the neighborhood since the earlier part of last century. There’s no sign, the wooden door has a peephole and no handle, and by the look of the cinderblock facade, there is nothing to suggest that remarkable things are going on inside. And Marlon Goldberg likes it that way.

If two words describe Goldberg and his work on Porsche automobiles, those would be discreet and fastidious. That’s evident before one even begins to take a close look at the dozen or so Porsche 911s (and an odd 356) set within the space. The shop could more easily be mistaken for the open-plan office of a hip architectural firm, with wood partitions floating in metal framework that give the surroundings a distinctly mid-century vibe. One imagines that Ferry Porsche would have approved, and it gives some inkling that Goldberg and his team are very particular about their environment and the cars that get built there.

In front of the transparent walls that separate the front of the shop from the work area is a row of cars, closely parked side-by-side. Here, one gets a sense that some ambitious projects are afoot. Goldberg explains that the perfectly painted black bodyshell of a 964 Turbo is being transformed into a stealth-bomber of a 911, ultimately built to twin-turbo specs for a client whose vivid imagination is fueled by deep pockets and plenty of patience. Alongside sits a 1965 356 C coupe, whose pale blue paint wears a patina that only years of love and appreciation from its original owner can bestow. Now Goldberg’s personal car, it will be preserved and not restored. Adjacent, early, narrow-body 911s rub shoulders with later, impact-bumper models; and there is even a rare 993 Speedster parked outside in the back. (Yes, only two originals were made, but he got one for his client anyway. That’s what Goldberg does.)

Goldberg loves all Porsches—but especially 911s—and as we sit at a well-worn conference table, with his new German Shepherd puppy Zander by his side, Goldberg explains his approach to Porsches and the mission of Workshop 5001. “We have to be respectful of each car’s history. We’ve put a lot of thought into that. Some shops like to throw one recipe at the 911, but we approach each project differently, unique to the car and the customer. For instance, I like carbs, I like MFI, CIS, Bosch Motronic. Different generations, different challenges. We’re happy to do a 100 percent–correct restoration project, or a hot rod. And not every one of them needs to be a million-dollar build.”

Attuned as he is to preserving 911 history, Goldberg is reticent to transform well-preserved 911s that stand a chance of remaining survivors or being reborn as fastidiously restored examples. Those cars undergo a completely different regimen at Workshop 5001. But when time—and past owners—have been less than kind, the gloves can come off, and there is no limit to what might be imagined.

The reason for my visit was to see, hear and experience a recently completed hot rod that demonstrates what Workshop 5001 builds when a client with vision and resources commissions a 21st century 911 that, without close inspection, could pass for an original, unadulterated example from the model’s first decade of production. In the case of this 1968 911, a bare-shell rebuild afforded the opportunity to create a high-power lightweight in the spirit of Porsche’s rare 1968 911 T/R racer.

Porsche 911 DNA is—like many Porsche owners—wound up pretty tight, with strong links connecting the first 901 prototype of 1963 to the latest Carrera. Those dominant genes are evident with even a quick look at a 911’s C-pillar, essentially consistent over its six-decade evolution. Of all the 911 models, the pre-1974 versions are the most magical. These long-hood cars combine light weight, simple design and sufficient power to make them brilliant driving companions. Nimble, quick and reliable, they are only lacking—by today’s standards—in some creature comforts and a hundred extra horsepower. Goldberg can fix that. Our subject car’s 2.5-liter engine has been built to deliver a reliable 235 hp—almost 100 hp more than the 911 T—along with 175 ft lbs of torque, on full tap from 3,000 rpm all the way to its 7,400 rpm redline.

The sound of an early 911 engine can be likened to a coffee can half-filled with pea gravel, that’s being furiously shaken. To those for whom a Ferrari V-12 is the only music, the clattering of a flat-six spinning in anger is just plain noise. But the cacophony from a high-strung air-cooled 911 is an atonal symphony, especially in a high-revving example like the Workshop’s 911 T-turned-monster—albeit one dressed in impeccable taste.

Every part of this 911 has been refined to standards unattainable when the car rolled out of Zuffenhausen in Porsche’s Pleistocene Era. Its flat-six is the living spirit of every 911, and it’s here that Goldberg reflects his father’s caring role as a cardiologist (and multiple Porsche owner) by meticulously building his engines with the dexterity of a surgeon. That focus is apparent when inspecting another car’s 2.9-liter power plant being buttoned up on an engine stand, awaiting the finishing touches to its BMRS plumbing. Every fitting, hose and fastener is perfect, and serious performance is hinted at by the intake system, featuring individual Kinsler throttle bodies with a brace of three-barrel PMO carburetors.

An early 911 is a demanding dance partner: step out of line and you’re likely to be staring at oncoming traffic from the wrong lane. Long before the era of ABS, all-wheel drive and torque vectoring, drivers who wanted to exploit the 911’s charms did so with a deft right foot and by showing a healthy respect for the mercurial sports car’s tail-happy shenanigans. With its prodigious power, this car will not suffer fools, but will reward competence behind the wheel, aptly demonstrated as Goldberg threaded traffic on sweeping curves and city back streets surrounding the Los Angeles International Airport and its environs.

I was a happy passenger, as I’m not comfortable driving a car that’s already been bought and paid for by a customer. I have ample familiarity with early 911s, but was in no way prepared for the power delivery of this vehicle. Engine revs build instantly with an intoxicating wail. Instead of the sound of ricocheting pea gravel, this engine was firing what seemed to be a belt of Browning machine gun cartridges, transmitted through the carbon-shelled Tillett racing seats that feature thin cushions upholstered in Porsche-correct houndstooth fabric. The five-speed 901 transmission, masterfully shifted by Goldberg, reminded me that driver engagement is key to enjoyment.

With its prodigious power, this car will not suffer fools, but will reward competence behind the wheel.  Photo by Ben Massey, courtesy of Workshop 5001.

When it comes to an old car that has been built to contemporary standards of fit and finish, part of the thrill of driving it fast is the knowledge that suspension and braking systems are up to the task. While many builds trade out the original torsion-bar suspension for modern coil-overs, this car uses a traditional setup with custom Sway-Away components. A StopTech brake system uses four-piston calipers in front and two-piston calipers in the rear.

Outside, Fuchs five-spoke rims—anodized in the color bronze—are a tasteful counterpoint to the car’s Brewster Green paint, a non-metallic hue chosen by the customer from Porsche’s Paint to Sample program. The black trim, including a period-correct Talbot side mirror and twin pea-shooter exhaust pipes, turn back the clock to make things feel like 1968 all over again. The interior is detailed by an artisan whose experience is in creating concept cars and prototypes for a well-known Italian studio. Although the car features minimalist appointments, every stitch and every surface of the cockpit are as perfectly tailored as an Attolini suit. And creature comforts aren’t absent, with heating, air conditioning and a Porsche classic radio.

Naturally, comparison to other restomod 911s becomes an unavoidable topic of conversation. Here, Workshop 5001’s philosophy is distinct from shops like Singer (Goldberg was instrumental in building the first Singer reimagined 964s) and Gunther Werks, both of whom produce their own interpretations of the air-cooled 911.

Every stitch and every surface of the cockpit are as perfectly tailored as an Attolini suit.  Photo by Ben Massey, courtesy of Workshop 5001.

Whereas Singer’s 964-based RS revisions and the hormone-injected 993s from Gunther Werks are overtly aggressive, Workshop 5001 takes an understated approach. For purists who prefer to walk softly and carry a big stick, this 911 is as stealthy as it is satisfying. “You look at his cars and it doesn’t look like he did anything,” commented one observer. Says Goldberg, “That’s the point.”