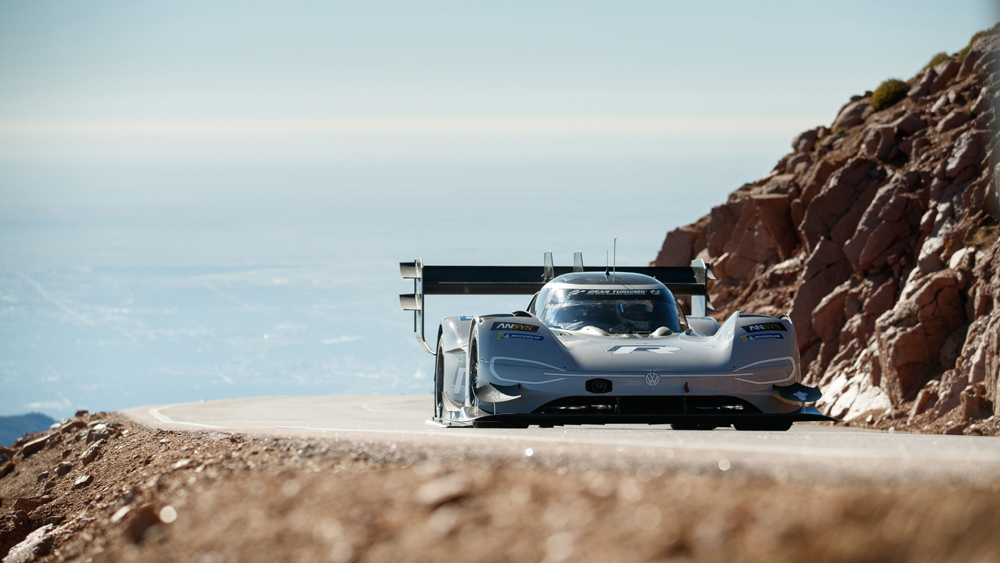 Drafting back into the spotlight in the wake of its appearance at the Los Angeles Auto Show—which wrapped up on December 9—the Volkswagen I.D. R Pikes Peak electric race car is now on display at the Petersen Automotive museum through February 1, 2019. Holding claim to the title of world’s-fastest electric race car, the car comes fresh off of a major victory earlier this year at the venerated Pikes Peak International Hill Climb in Colorado Springs, Co., where it set a record in the electric prototype class, completing the 13-mile course in a blistering seven minutes and 57 seconds—15 seconds faster than the previous record.

The all-electric beast will be positioned outside of the Mullin Design Studio display to promote the upcoming Driving Toward Tomorrow exhibition, which will showcase some of the automotive industry’s most forward-looking designs, including a number of concept vehicles from top automakers. The Volkswagen racer is a natural choice to tease the display as the company has committed to electrifying its entire vehicle lineup by 2030 (perhaps even with an electric version of its iconic bus). That said, it’s a slow tease—the Driving Toward Tomorrow exhibit isn’t scheduled to open until October 2019.

But for now, the ultra-aerodynamic silver racer will hold down the fort, giving visitors to the museum an up-close look at the record setter. In constructing the I.D. R Pikes Peak, Volkswagen’s engineers had to contend with the perennial dilemma that arises when trying to add oomph to electric vehicles: The more power you tack on, the more weight you have to add in the form of batteries. To counteract this, the designers cut pounds wherever they could, using computer modeling to design the absolute lightest chassis and aerodynamic components possible using a carbon-fiber and Kevlar composite. In the end, the car weighed in at just 2,425 pounds—including the driver. That weight advantage coupled with the car’s 671 hp output proved sufficient to trounce the record set by the eO PP100 in 2015.

Its mission complete, the electric car that climbed 4,700 feet in less than eight minutes will get some much-deserved rest—and due adoration—at the Petersen.