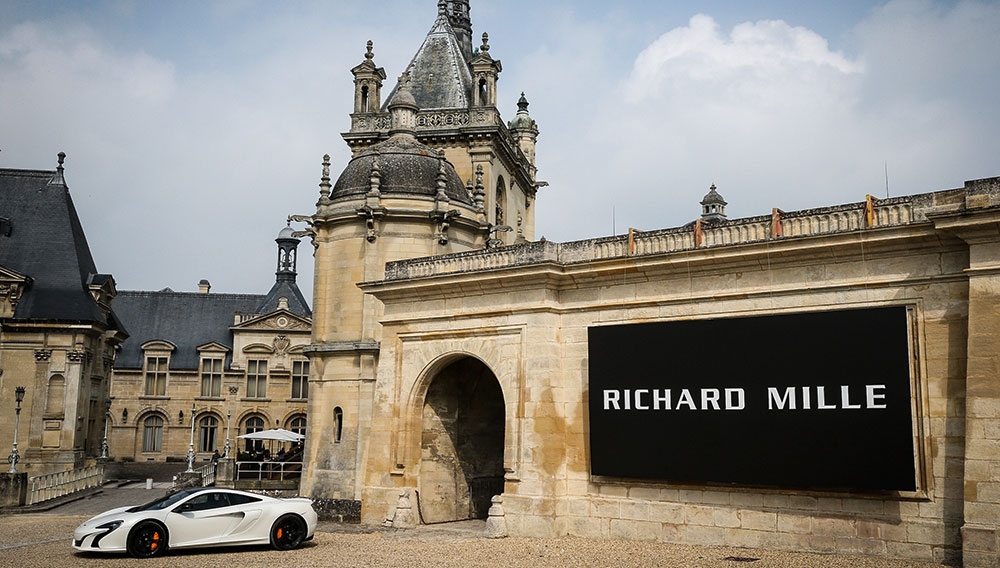 Sunday, September 6, 2015, will mark the return of the Chantilly Arts & Elegance Richard Mille. Last September’s inaugural event was, without question, the most exceptional automotive concours of the century. Presented by the watchmaker Richard Mille and the French automotive events company Peter Auto, the Chantilly Arts & Elegance Richard Mille weekend is a must-attend event for car lovers who appreciate a bit of culture with their cars. Last year’s elegant spread was presented on the grounds of the castle at Chantilly, less than an hour outside of Paris, which will again serve as the setting for this year’s event.

This ancient venue offers vast formal grounds on which to present the Concours d’Etat, a select group of the most beautiful automobiles from collections around the world, divided into 10 classes that range from Grand Prix to Grand Touring, and judged by a panel of international experts. Fashion and new concept cars will be presented in the Concours d’Eelegance, while a picnic spread throughout the grounds is hosted for hundreds of car-club members with cars participating in the Grand Prix des Clubs.

The Château de Chantilly, which dates from the 16th century and houses hundreds of historic paintings, is open to visitors, who will also have an opportunity to enjoy exhibitions dedicated to the culinary arts, wine, and Champagne. An equestrian show, carriages, and the famous Horse Museum were key attractions last year and will once again provide memorable entertainment in “concert” with music and the cars themselves. Water games in the Grand Canal will feature radio-controlled boats, a rowing regatta, and a fabulous old steamboat.

Preceding the grand day is a car tour for exhibitors wishing to participate, and Saturday evening culminates with a flamboyant equestrian show and an official black-tie dinner for invited guests in the Grand Ecuries (Grand Stables). That evening, the auction house Bonhams will conduct its inaugural Chantilly auction, Automobiles d’Exception, which features 31 lots that include significant Maserati and Bugatti automobiles.

General admission to the Sunday event starts at $52. (chantillyartsetelegance.com)