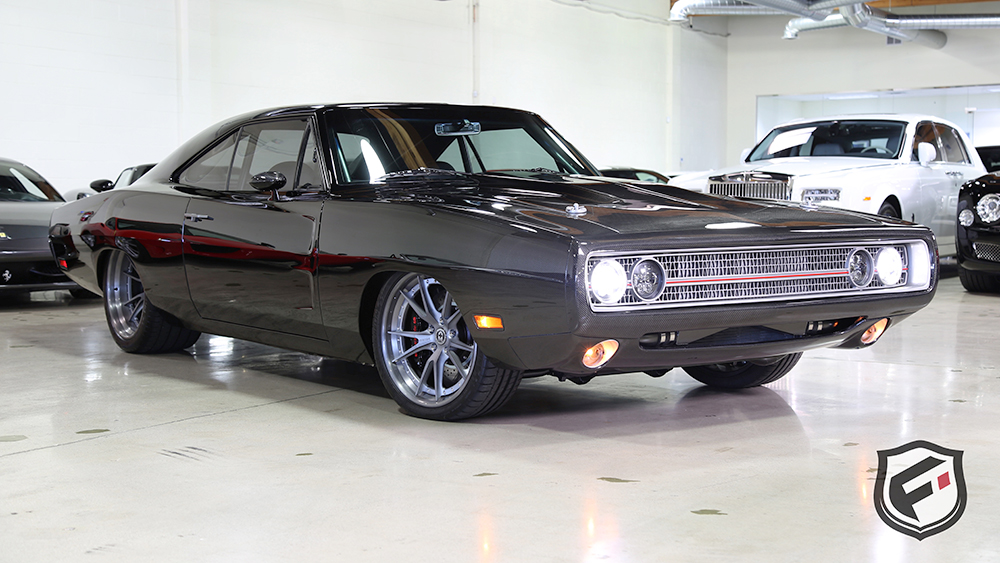 A stock 1970 Dodge Charger with the famed 440 Six Pack powerplant (three, two-barrel carburetors) was good for 390-horsepower. Not too shabby for a big ole bunch of Detroit steel. But the crew at SpeedKore, a Grafton, WI, custom builder and carbon fiber fabrication shop, thought the Charger needed a bit more get-up-and-go. Bless them for that, because what they created is this 1,650-horsepower, carbon-drenched beast that you may recognize from The Fate of the Furious as Dom Toretto’s treasured set of wheels. And now it’s up for sale at a Chatsworth, California dealership named Fusion Luxury Motors.

Nicknamed “Tantrum,” the immense power comes from a Mercury Racing V-8 quad-cam, four-valve engine with twin-turbos. That whopping 9.0-liter monster is intended for a boat, though at 17.3 feet, the ‘70s Charger kinda qualifies as a boat, right? The 1,650 ponies get to the wheels via a Tremec T-56 six-speed manual, which may make this stunner the king of the Save the Manuals club.

Since some of SpeedKore’s core business comes from carbon fiber work, it’s no surprise that much of Tantrum is comprised of the pricey, stiff stuff. The inner and outer door panels are custom carbon, as is the entirety of the body in front of the firewall, including the front bumper, and custom-billeted grille. The dash and gauges feature carbon fiber, and the stick shift is also forged from the composite.

Tantrum stormed into the public eye back in 2015 at the SEMA show in Las Vegas, when it took the Gran Turismo, the top honors for the Best Domestic Car in the show. It deservedly nabbed a ton of attention and the listing notes it’s been “featured in over 100 digital and print publications,” (make that 101 now?)  and it made an appearance on Jay Leno’s Garage which you can check out below. Perhaps its greatest role was starring as the primary car driven by Vin Diesel in the eighth installment of The Fast and the Furious, but regardless of which accolade the future owner wishes to lead with, Tantrum is sure to wow and delight all who lay eyes upon it.