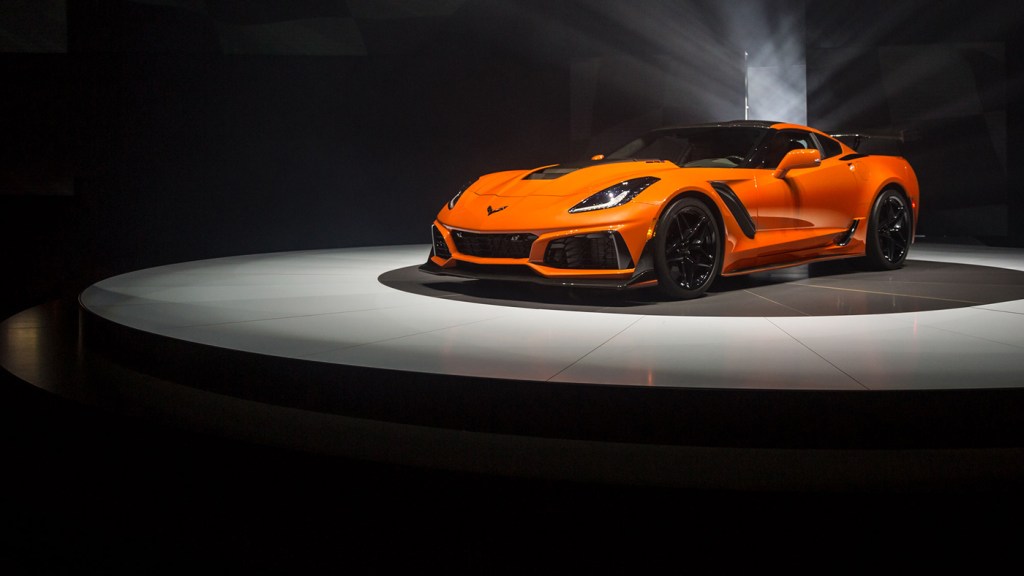 Corvette enthusiasts are anxiously awaiting the well-documented eighth-generation Chevrolet Corvette (C8), a mid-engine model which should be arriving sometime in the not-too-distant future judging from sightings of camouflaged test cars in Michigan. But Chevy isn’t done with the current C7 Corvette just yet. At the recent Dubai Motor Show, the company launched the ultimate expression of the classic front-engine fury—the 2019 Corvette ZR1.

The new car’s 755 hp and 715 ft lbs of torque make it the fastest and most powerful Corvette to ever emerge from the factory in Bowling Green, Ky. The supercharged 6.2-liter LT5 small block V-8 bursts through the ZR1’s hood like Superman pulling open his shirt to reveal the red “S” on his chest.

This is because the 2.65-liter Eaton supercharger (52 percent larger than the one on the Z06’s LT4) adds three inches to the engine’s height. To minimize the corresponding bump in the hood, designers simply cut a hole for the blower to poke through. This solution, incidentally, runs afoul of Europe’s pedestrian protection requirements that mandate impact absorption in case of collision with a person, so the ZR1 will not be offered for sale on the continent.

The LT5 also marks GM’s first use of a dual fuel injection system. A high-pressure direct-injection system precisely and efficiently manages fuel under most circumstances and a high-flow port injection system takes over at full power, effectively pouring raw fuel down the ravenous beast’s maw when it rages with the fury of 755 equine.

The resulting fire naturally creates prodigious heat, an issue that caused the Z06 serious problems when driving hard in warm conditions. To alleviate that concern in the ZR1, Chevy engineers added four more heat exchangers, bringing the total for the car to 13.

But the Corvette’s real problem is the sleek speedster’s shortage of space at the fore to capture cooling air.  Chief engineer Tadge Juechter enviously eyes the brick-like Dodge Challenger Hellcat when it comes to cooling the powerplant. “We have this sleek little pointy-nosed car with very little frontal area,” he noted in comparison.

To address this challenge, the ZR1 not only wears entirely unique front bodywork, but even the supporting structure beneath it has been changed to accommodate additional radiators on the car’s left and ride sides to supplement the centrally mounted heat exchangers. As a result, the team verified the ZR1’s track capability at 100 degrees Fahrenheit rather than the 86-degree standard used for the Z06. “It shows confidence in our design to introduce it in Dubai,” Juechter pointed out.

Beneath the gaping air intake, the ZR1 wears a downforce-inducing front underwing where the Z06 has a simple splitter. To create the required downforce, a conventional flat splitter would need to be so long that it would be impractical for real-world driving conditions, Juechter explained. So the ZR1 uses an inverted wing under its chin to generate downforce from a smaller device.

The reason so much force is needed on the front of the car is to balance out the huge rear wing bolted through the Corvette’s back bodywork, attaching directly to the frame. Every Corvette up through the Z06 has made do with a simple spoiler attached to the tail. The ZR1’s wing produces much more downforce with a smaller penalty in terms of drag, so despite aesthetic reservations, Juechter pressed forward with the wing as the solution. It works, generating 950 pounds of traction-aiding downforce at high speed.

Speaking of which, just how fast will the new ZR1 go? Chevy isn’t saying exactly yet, revealing only that the number will exceed 210 mph. The wide-open spaces of Dubai might be a good place to demonstrate it.

The ZR1 goes on sale in the United States in the spring, with a price that, while not yet announced, should in the neighborhood of $120,000.