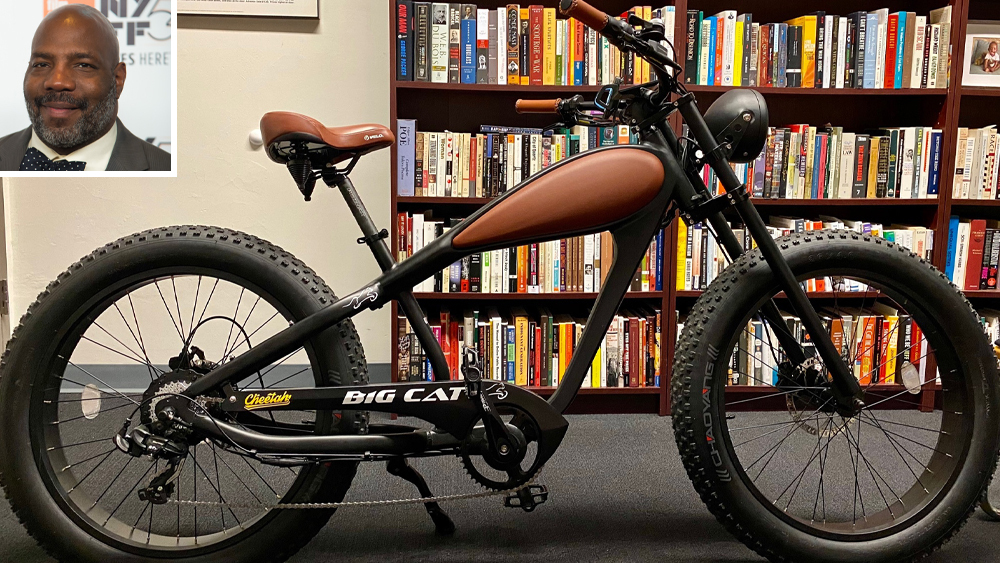 When the Covid-19 pandemic hit this year, journalist Jelani Cobb came to the same conclusion as many other New Yorkers: He had to change how he got around town.

“I was wary of taking the subway,” he recently told Robb Report. “I decided I would just ride my bike around the city. Which is good—I still enjoy it—but the one thing that came up was the fact that sometimes a bike is not practical.”

The New Yorker staff writer and Columbia professor, known for his commentary on race and justice, considered buying a run-of-the-mill scooter or even a Vespa before finally deciding on an electric bike. The reason? He wanted a two-wheeler that offered all the familiarity of a bicycle—but with a lot more power. So, in mid-November he reached out to his 348,000 Twitter followers and asked for help:

So I’m thinking of getting an e-bike.

But I know nada about e-bikes.

Basically looking for something I can use to substitute for the subway in Manhattan commutes. Any suggestions?

Cobb had three criteria for his e-bike: It needed to be big enough to accommodate his tall frame (he’s 6’3″), powerful enough to conquer hills, and it had to look different than his traditional Trek bicycle. He considered the compact Super 73, which he dismissed because it was too small, the sporty Ariel D-Class, which wasn’t much bigger, and the hulking Super Monarch, which just didn’t have the look he wanted.

Thanks to the advice of his followers, along with some further research online, his quest took only a few weeks. He ultimately landed on the Big Cat Cheetah XXL, a gorgeous café racer-inspired model equipped with a high-torque, 48-volt hub motor and a high-capacity Samsung Cell lithium-ion battery. “I’m in love with this thing,” Cobb wrote in a tweet after buying the bike. He also thanked his followers for their help and Big Cat Electric Bikes for answering “100 questions.”

So, what advice would Cobb offer others beginning their own searches for e-bikes? “Know what your needs are,” he said. “And give yourself time. There’s a lot of inventory out there.”

There’s also a lot of demand. This past summer, e-bikes sales spiked by a whopping 190 percent compared to 2019. And the industry analysts now expect the number of e-bikes on the road to reach 300 million worldwide by 2023—a 50 percent increase over the 200 million in circulation just last year. But this boom in popularity doesn’t necessarily make finding the right bike any easier, especially if you’re a newbie.

To help you whittle down that inventory, we reached out to the man who answered Cobb’s many questions: Vincent Gebbia, the founder of Big Cat Electric Bikes. Gebbia advises that to make an informed decision you’ll need to answer a few essential questions. Here are his tips for finding the right one for you.

Know Why (and Where) You’ll Be Riding

“The first thing people need to think about is the style of riding they’ll be doing,” Gebbia told us. Will you be using your bike for leisure, commuting, competition, mountain biking or maybe even for help in recovering from an injury? If you intend to rely on the e-bike for commuting, for example, you’ll want something lightweight and with a long-range battery, whereas if you plan to take it out primarily for trail riding, a heavy-duty frame and a powerful, high-torque motor are in order. Whatever the reason, keep that at the forefront of your thinking throughout your search.

Make Sure the Bike Has Enough Power and Range

The biggest reason most people decide to buy an e-bike is because of the battery-powered motor, which makes riding tough terrain and long distances far easier. But not all e-bike motors are created equal. “I want to be able to not lose power when I’m heading up that hill,” Gebbia said, which is why all of Big Cat’s bikes have 750-watt, high-torque motors. As for your battery, you’re going to want one that allows for a range of 30 to 40 miles. That way, you don’t have to worry about charging it before you’re done riding for the day.

It Should Have a Strong, Durable Frame

They may look almost identical, especially nowadays, but bicycles and e-bikes are not the same. The battery-powered version needs to be stronger and more durable, which is why many models are bigger and bulkier. “Our bikes are designed to be electric bikes,” Gebbia said. “Meaning, a heavier gauge of aluminum and stronger welds.” In short, those thicker frames are necessary to carry the added weight.

And Even Stronger Brakes

Thanks to their motors, e-bikes can also travel a lot faster than their pedal-powered counterparts. That’s why bigger and stronger brakes are so vital. But those aren’t the only safety feature your bike will need. You’ll also want a bright LED lighting package, especially if you plan to ride at night.  “Every bicycle should have lights on up front and rear,” he said. “It’s just a great safety feature.”

E-bikes also require different accessories than a traditional bike. An absolute must is a large, full-color LCD display, so you can monitor your ride, shift between various modes and keep an eye on your battery gauge. You’ll also probably want a fast charger for those days when you need a little extra range. And because e-bikes tend to be heavier and bulkier than standard bikes, make sure to get a sturdy stand or rack.

Try It On First

While Gebbia says these tips should help you find the right model, there’s one thing he suggests everyone do before purchasing an e-bike if they can. “Get on a bike and try it,” he told us. “See it, touch it, feel it.”

Know How Much You Want to Pay

Finally, one from us: Loosely speaking, electric bikes cost more than your average pedal model. High-quality e-bikes start at around $2,500, and the very best can reach well above $10,000 (to as much as $80,000). If you need some ideas for where to start your search, here are seven e-bikes worth considering.

Somehow, Bugatti’s New Chiron Super Sport Is Even More Powerful Than Anyone Expected

Bentley’s First EV Will Rocket From Zero to 60 MPH in 1.5 Seconds, the CEO Says