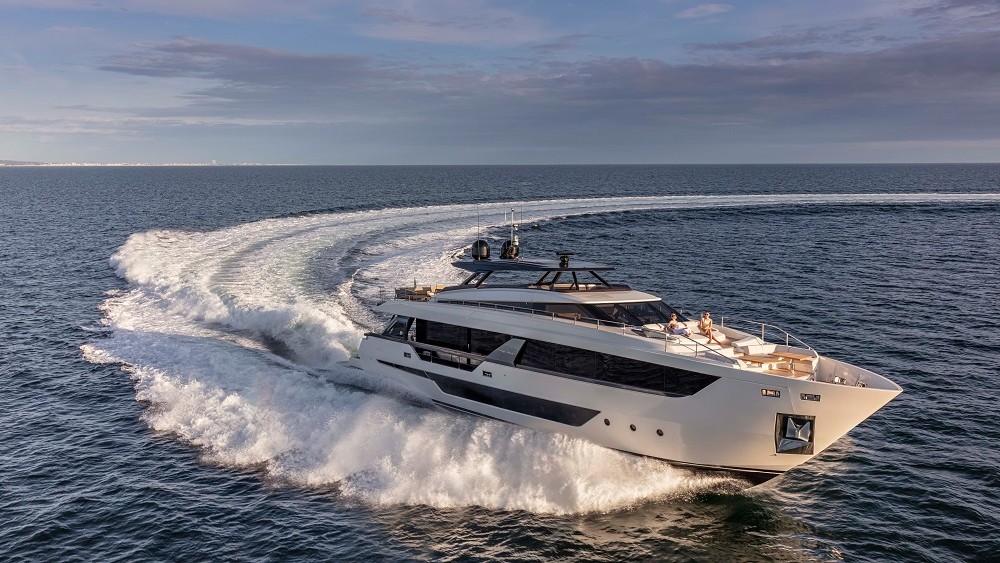 There are defining moments in every brand, and for the Ferretti Group, that came last week with the launch of the Ferretti Yachts 1000. The Italian builder’s new flagship is not only the largest model that brand has ever built, but its design is part of a new revolution taking place in the 90- to 110-foot motoryacht segment.

Its main competitors, Azimut and Princess, have recently launched models in the same range, and both share the Ferretti’s “wide-body” approach, which essentially means packing a third more interior volume into the same length of hull. The Azimut Trideck and Princess X95 are both successful designs, though the profiles are more radical-looking than the Ferretti 1000, which has a more traditional look.

Stefano de Vivo, Ferretti Group’s chief commercial officer told Robb Report during a tour of the 1000 that it was a “crucial” new design. “It will be a template for other models going forward,” he said.  “At the same time, the 1000 is not an urban apartment on the water. It’s modern and minimalist, but definitely marine.”

The main salon is “minimalist but marine,” according to the design team. It’s also unusually large and wide for a yacht its size.  Courtesy Ferretti Yachts

The design team, including Ferretti’s Filippo Salvetti, who penned the exterior and IdeaeItalia, which created the interior, focused on presenting the brand’s yachting heritage. “We may have gone a little far with earlier models,” says De Vivo, referring to the residential look of other yachts in the line.

While larger interior volumes are in high demand with new boaters, there are challenges. The first is keeping the profile from looking bloated. Salvetti did a good job with that by creating a top deck that looks slender, along with a larger hull body defined by racy, angular dark windows that give the impression of performance.

The second challenge is actually divvying up the unusually large interior volume so it’s proportional to its actual function within the yacht. That extra-large salon might seem like a big benefit, but if it seems like a vast empty space that sacrifices galley size, for instance, then the boat doesn’t function properly.

The flybridge on the upper deck is divided into different sections, with a slatted carbon-fiber hardtop up front to keep the area shaded or let in the sun.  Courtesy Ferretti Yachts

I didn’t see any evidence of that on the 1000 which has, what the company calls its “new flow concept,” so that individual rooms feel large and spacious and there is a natural movement through the boat uninhibited by unnecessary bulkheads or cramped rooms.

The main salon is big, but the design team used floor-to-ceiling windows on the sides and rear, furnishing it elegantly but sparingly. Walnut’s the prevailing wood across the interior, with the designers using subtle, striped patterns for the walls and bold, flame-colored hues for dining table and other furniture. Accents have a special ribbed pattern. There’s a traditional, almost classic coordination of the colors and materials, as opposed to the 1000’s competitors, a bit louder and more experimental in design.

“Owners can customize the interiors if they want another look,” Celine Binard, part of the Ferretti design team, said during a tour. The 1000 took three years from the initial drawings to the first hull, Epic, which was going to a French owner, who made minimal changes to the classic styling.

The full-beam main suite was designed to make use of the full-beam space and has a private ensuite in the front.  Courtesy Ferretti Yachts

What struck me most about the 1000 was the level of detail that went into making it work in a simple, straightforward way. Looking through the full-height windows in the main salon, the designers had cut away a portion of the side passage so that instead of seeing the outer wall, it was a clear view of the water. That involved some serious structural engineering to enhance the owner’s view. It also had features like a Garvan audio system, which include hidden speakers embedded into the ceiling for a clearer, more uniform sound, while preserving the minimalist impression of the interior.

That was apparent all over the boat, from the 110-square foot galley, which is much larger than on most boats this size, to the spacious main suite forward, with a full-beam ensuite, picture windows on either side of the bed and chair and table that could serve as an office.

The cockpit behind the main suite was also conceived to be a comfortable space that is protective but offers clear views of the water. Ditto the lounges, table and sunbeds on the foredeck, which turn what is typically the working end of the yacht into a private social area.

The rear beach area offers instant access to the water (the center portion of the swim platform slides down into the water) but also combines with the cockpit above to create a larger social space.  Courtesy Ferretti Yachts

My favorite space was the upper deck, with carbon-fiber hardtop with slats forward that offers both sun protection and more sunlight, depending on owner preference; then there’s an al-fresco dining table on port and a large wetbar/outdoor kitchen to the right. At the rear are lounges for socializing. The 600-sq. ft. space is often a nook on similari-sized yachts, but Ferretti (and its competitors) realize how many people prefer comfortable outdoor living, so have made it a main feature.

Binard says everything on the 1000 was “measured in millimeters,” which explains why deck sizes and the features within feel big but livable. “Structurally, it was a challenging design because of its size,” she adds. “The engineering was very different than our smaller yachts.”

Epic has four guest staterooms on the lower deck, and a large beach area at the transom. The beach, combined with the terrace just above, measures a whopping 440 square feet—equivalent to a much larger yacht.

What’s also unusual about the 1000 is its 28-knot top speed, thanks to twin 2217-hp MTU diesels. That’s lightning fast for a boat its size. The Ferretti folks declined to say what size model would be coming next, but it’s definitely going to have the look, feel and space of the 1000.

Check out more images of the new flagship.