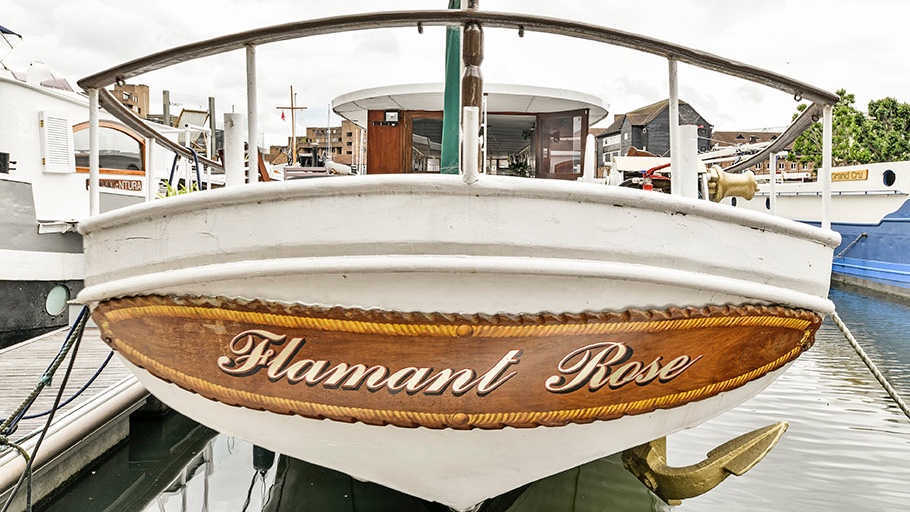 A 100-foot yacht that once served as a floating home for Edith Piaf, one of France’s most celebrated singers, was put up for sale last week in London for $2.59 million. Flamant Rose, or “Pink Flamingo” in English, is 150 years old and, according to its current owners, served as the love nest for Piaf and famed French-Algerian boxer Marcel Cerdan.

The owners, celebrity hypnotist Valerie Austin and her husband James Pool, bought the yacht 25 years ago. They refurbished the interior in 1997, giving it a Roaring ’20s look. The open plan includes a 60-foot-long salon on the main deck, distinguished by huge round portholes, a gold bar and period furniture. Below-decks is a lounge and study that connects to the galley and a single bedroom, which Austin calls the “boudoir.”  The yacht even has a bathtub in one of its two bathrooms.

The salon is 60 feet long, encompassing most of the main deck, with huge portholes that let in light.  Sotheby's International

Beyond the romantic charm of the boat’s interior, Flamant Rose is arguably a historically significant vessel, at least by Hollywood terms.

Cerdan and Piaf, two of France’s most internationally known celebrities at the time, kept the yacht moored on the Seine in Paris, and cruised to different cities in France and other European countries during her tours, living on the yacht.

Considered France’s greatest ever boxer, Cerdan started life as a scrappy, poor kid from Algeria to become a champion with knockouts in over 60 fights. He lost his last fight to American boxer Jake LaMotta, whom Robert De Niro portrayed in the movie “Raging Bull,” but many pundits say that was because Cerdan dislocated his right arm early in the fight and could not defend himself.

Flamant Rose‘s “boudoir” includes a gold bathtub, a rarity on any yacht.

Piaf also had a rags-to-riches story that the French loved, having been abandoned by her parents as a child. As a teen, she made a living singing in her grandmother’s brothel. In 1935, Maurice Chevalier, another French actor/singer, heard her singing and helped “The Little Sparrow” on her way to superstardom.

Piaf met Cerdan in 1947 and their love immediately became the stuff of tabloids. The public loved that the romance was between a singer and boxer, though it was rarely mentioned that Cerdan was married with three children. Piaf even wrote a song about the love called “Hymne a l’Amour.” She proclaimed that Cerdan was the only love of her life.

The affair was fated to have a tragic ending. On October 27, 1949, Piaf was in New York City to perform, awaiting the arrival of Cerdan, who was scheduled for a rematch with LaMotta. The transatlantic Air France jet crashed into a mountain in the Azores, leaving no survivors. France went into mourning for the boxer. Piaf died on October 10, 1963.