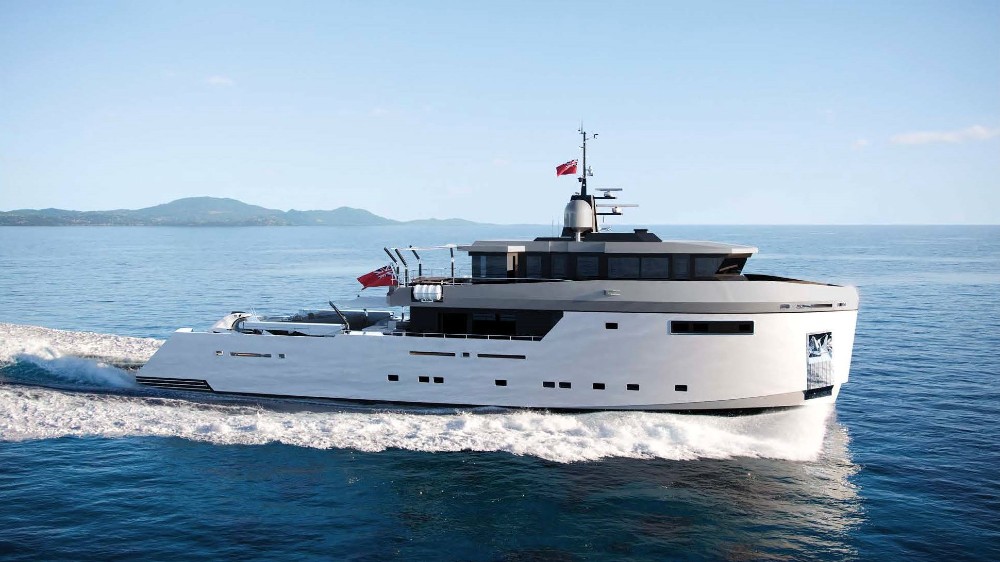 The idea of designing a yacht for Millennials would’ve been laughable just 10 years ago. But leading yacht designers are seeing their clients trending younger each year, with the most recent being millionaires in their twenties and thirties.

Last month, Fraser Yachts reported a 10-year drop in the average age of its customers, due to an increase in young cryptocurrency investors and tech executives entering the market. The youngest client was 25.

Expedition yachts have become the favorite of that group, designer Gregory Marshall told Robb Report. “These new owners don’t want to sit around and look at their stuff as the previous generation did,” he says. “They are more about the activities that you can undertake from a boat.”

The interior is open plan, so owners can install their own furniture and artwork to personalize the spaces.  Courtesy Burgess Yachts

Olivia O, Ragnar and La Datcha have all been designed as globe-trotting explorers, but there’s also a breed of smaller explorer yachts that allow for long-range adventure.

Project Fox, currently under build at the UK’s Pendennis yard, is a good example of the new generation of explorer yachts designed for a younger owner. Q London was the principal designer for the 115-footer, which has a 3,600-nautical mile range at 12 knots. The look isn’t classic or elegant, but it isn’t meant to be.

The yacht has 1,200 square feet of exterior space, with two cranes in the aft deck for launching and retrieving two large tenders, or if the owner can afford it, a personal submersible.

The 1,100-sq. foot cockpit space was designed to carry multiple tenders and toys and transform into a large beach club.  Courtesy Burgess Yachts

“There’s a shift in the way people are using boats and experience-based has become the currency,” Burgess Yachts’ Ian Sherwood, who has the listing for Project Fox, told Robb Report during a recent tour. “The explorer market is still a niche sector, but it’s growing.”

Project Fox sits within a size range dominated by composite boat builders, but there are a handful of yards working in metal, often for explorer vessels. At Pendennis, three of the seven boats currently in the yard are expedition or support vessels. The 190-foot expedition yacht Sea Wolf, 225-foot Jester are undergoing refits, and Project Fox, with a steel hull and aluminum superstructure, is halfway through the build process.

Project Fox’s original owner stepped back in the early stages after committing to another boat. But Pendennis continued with the build, which is due to be completed next year. It hopes to have a new owner by the time the boat is launched.

James Ratcliffe, managing partner at design studio Q London, told Robb Report that the design was akin to a blank canvas. “It has clean lines on the outside of the boat to run through the interior, which then allows any client to come on board with any artwork, soft furnishings, light fittings and ultimately create a personal stamp themselves,” he said.

Key features include two full-beam master suites, one on the main deck, and the other on the lower deck, with two double-twin convertible cabins. “It was always up for debate, whether to add a third VIP cabin or keep two very good-sized staterooms,” said Ratcliffe. “We chose the two large master cabins. It works for two business partners wanting to charter for a weekend or a family with guests.”

The layout has more of a flow than most yachts, with the idea being that the crew members can mix somewhat freely with the owners and guests in common areas like the galley and hallways, rather than being cordoned off in their own quarters. That philosophy shows a new type of spirit among younger owners, who aren’t necessarily into the usual upstairs/downstairs design configuration.

The top deck includes a salon, with floor-to-ceiling windows, and the pilothouse, with a walkaround passage on all sides and lounge at the rear.

Tesumo decking—a new sustainable alternative to teak—carries across the exterior deck spaces, matched by Chevron oak flooring on the interior. There is a DJ station, glass-walled sky lounge and dedicated wine fridge. And once the tenders are removed from the huge aft deck, it transforms into a beach club with significantly more space than many larger yachts. The design has a long set of stairs down to the water at the transom, providing a nice launch point for divers or swimmers.

Besides being a standalone yacht, the builders say it could serve as a support vessel for larger superyachts that want the space to carry toys. They also envision it as a charter yacht.

The 115-footer is being built to RINA class standards, with twin Caterpillar C18 ACERT diesel engines. The top speed will be 15 knots, with a cruising speed of 12 knots. It is listed for about $17.2 million.