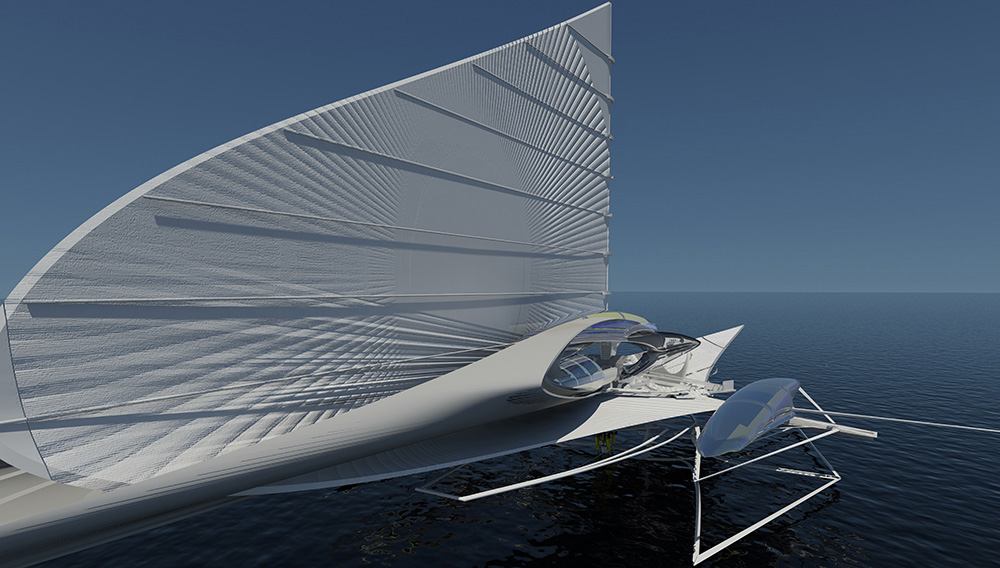 The Fresnel Hydrofoil Trimaran might look like a sci-fi writer’s fantasy, but it will soon become a reality for its new South African owners. The futuristic sailboat is the brainchild of Dr. Margot Krasojević, a London-based architect whose career has focused on creating eco-friendly projects that shift existing paradigms. Recent projects include a Canadian prison with its own hydroelectric dam, a coastal home in South Africa powered by the tides, and a water-purifying bridge in Amsterdam.

The Fresnel (named after a prism lens used to concentrate light in lighthouses) uses a 100 percent green propulsion system that is years beyond the diesel/electric hybrid engines used on some yachts. The sailboat uses solar and wind power to charge the onboard banks of batteries. “We’re aiming for the same speed as if the boat runs on fuel,” says Krasojević. In other words, the owners will gain the same performance without any compromises, not to mention zero emissions and no fuel costs.

Krasojević has essentially created a waterborne perpetual-motion machine. Working with U.K. hydrokinetic engineers and veteran yachtsmen, Krasojević designed a sailing yacht for both long-distance cruising and racing. The carbon-fiber sail—modeled on the fixed-wing sails of recent America’s Cup racing yachts—is more like an aircraft wing than a traditional sail, allowing it to perform well in the lightest of breezes.

When there is no wind, three electric motors (one in each hull) run on the boat’s batteries. Fresnel lenses, solar panels, and holographic film intensify sunlight and channel it to the batteries. “Even the interior of the main cabin is covered with holographic film, which acts as a prismatic concentrator that channels light towards the photovoltaic materials,” says Krasojević. Translation: Every available space is used to charge the batteries.

Beyond long-distance cruising, the owners plan to use the yacht for racing. In trimaran mode, the yacht can reach 40 knots. When the owners want even more speed, the vessel lifts up onto hydrofoils. “This will increase the top speed considerably,” says Krasojević.

In cruising mode, the Fresnel yacht converts to a monohull. On battery power alone, it can cruise at 15 knots. The construction of the high-tech Fresnel Hydrofoil Trimaran is scheduled to begin this summer. It will incorporate the latest lightweight composites throughout the hull. The 115-foot yacht, which should cost nearly $15 million to build, is a one-off project for Krasojević.

But the one-of-a-kind sailboat promises to push yacht design forward. “The goal of this yacht is to use renewable energy every way possible without compromising the design,” Krasojević says. (margot-krasojevic.squarespace.com)