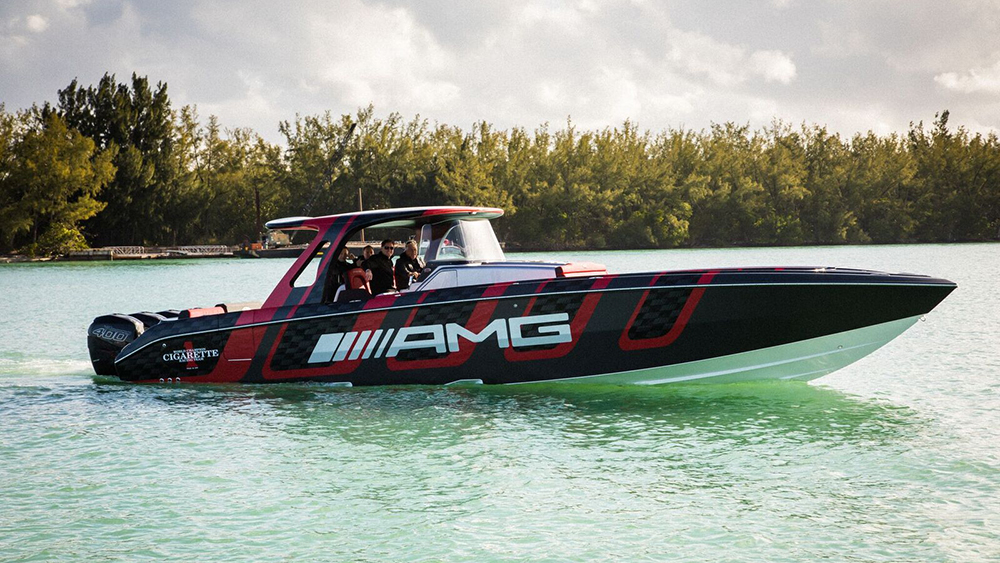 The moment the prow of the 41’ Cigarette Racing AMG Carbon Edition emerges after passing underneath the Rickenbacker Bridge, Bud Lorow looks around from behind the wheel. Miami’s Key Biscayne bay is ahead of us; calm, open waters begging to be shredded by the four Mercury Racing 400R outboard engines idling behind us. Lorow, a seasoned offshore racing champion, turns slightly and then moves the throttle halfway to wide open.

Instantly, we’re up on plane—the term for when the boat gets on top of the water—and everyone teeters, then titters. Even at half-tilt, this is an absurdly fast boat, and there’s something about immense power and the sensation of speed that draws giggles out of everyone. Lorow glances around, ensuring everyone’s properly bracing, or seated somewhere behind the windscreen above the center console. “Alright,” he says, hand on the throttle. “Ready to go for it?”

He cranks it wide open and we’re suddenly flying at 83 miles an hour, the boat’s absolute top speed. As the carbon-fiber infused hull skips along the top of the water, and downtown Miami blurs on our right, the ride is intense, but manageable, especially when you’re hunkered down behind the windshield. Dare to inch your head out of that protected area, and you’ll find the wind sledgehammering your face will make your cheeks flap a bit, force your eyes down to tiny slits, and turns breathing into a somewhat labored process. But it’s tremendous fun to streak by other, lesser boats—also motoring at full gallop—like they’re standing still. Before those other boaters shrink away in your (rather enormous) wake, there’s just enough time to register the look of jealousy on their faces. And for your smirk to be seen by them.

Though isn’t that the point, when it comes to high-powered anything? To feel like you’re the king? Cigarette Racing has mastered performance on the water in the same way Mercedes-AMG has on the roads and tracks. The twelve-year partnership between the two powerhouse manufacturers has produced a number of stunning one-offs. A few years ago, I went out one such collaboration, a 2,200HP Cigarette-AMG that had a top speed limited to 100 mph. At full gallop, that beast tested the elasticity limits of my face, I had to duck down just to be able to gulp some air, and I mostly prayed for the ride to end so the feeling of being ripped apart would cease. That $1.2 million, 41’ boat was built for top-end speed, to demonstrate the apex of power on the water, drawing a tidy parallel to the equally-breathtaking power of the AMG GT R Coupe it was based upon.

Performance boats are like performance cars in that you need to consider the use case scenarios. An AMG GT R will happily eviscerate a race track, lap after lap, but you’ll feel knocked around by the end of your session, if you’re properly pushing to the limit. Similarly, a 2,200HP Cigarette boat will get you from Miami to Bimini in record time, but your body will feel like it’s spent an hour inside a washing machine upon your arrival.

“While our customers ask for the maximum amount of speed, it’s really not what they want and we tend not to build boats that way,” says Scott Preacher, chief marketing officer for Cigarette Racing, back on the dock at Miami Boat Show. “When you build a super lightweight boat, the way it handles the water will be a very violent experience. You’ll get the crap beaten out of you along the way.”

This year, Cigarette took inspiration from the Mercedes-AMG GT 63 four-door coupe when designing the 41’ Carbon Edition. “The idea is it’s still a performance car, but you can take two extra people with you in the backseat,” Preacher explains. “Our boat is exactly the same.” Supremely high-speed boats have a maximum capacity of four or five people, but you can comfortably bring up to eight people on this year’s model and still fire along at 80-plus miles an hour. Drop the speed down to a cruising clip (about 20 to 30 miles an hour), and you can have up to 20 friends along for the ride.

Speed is important, but so is maneuverability and comfort. Weight and balance are the chief considerations in how a boat handles rough water quickly. You want a low center of gravity, and long beams for a wave-crusher, and you want to shred all extraneous weight. Cigarette engineers trimmed about 500 pounds out of this year’s model by incorporating plenty of carbon fiber throughout the boat. The hull sees carbon fiber laminates sandwiching a lightweight core, increasing rigidity substantially, and the deck, rudder, and hardtop are also forged in carbon fiber.

Next, power and fuel storage were assessed. While Cigarette customers typically ask for the biggest engines available, 1,600 horsepower from the Mercury Racing 400R engines is more than ample. Smaller engines also mean you’ll need less fuel. Extreme boats like these assess fuel consumption in terms of gallons per hour. The 2,200HP boat guzzled 270 gallons in an hour at full speed, so it needed a 320 gallon tank. This year’s Carbon Edition drinks slower, so the tank can be reduced, saving you weight. (Want to fill it up? Be prepared to fork over $1,200.) “We could’ve made this boat five or 10 miles an hour faster, but the way we propped it, you can get up on plane, have 15 passengers on board, and it’ll still get up and sprint,” says Preacher. He’s completely right; 83 miles an hour on the water is perfectly fast enough.

The cost of this speedy marvel of engineering? $850,000. You’ll get plenty of luxury touches, including a designo graphite grey magno paint job on the hull, a hue and finish that’s exclusive to the GT four-door coupe, and high-gloss red AMG accents that pop all over the exterior. Tailored seat upholstery utilizes a fabric called “Cigarette Cool,” a custom creation that reflects heat so you can use darker colors without worrying it’ll be too hot to touch after cooking in direct sun. There’s a top-notch sound system, ambient lighting, and a trio of 17-inch touchscreens.

While this AMG custom model comes as built, Cigarette will work to accommodate nearly any customer’s desires. “Back in the day, there were more than a few bale-sized hatch requests, used for nefarious things,” Preacher coyly smiles, alluding to Cigarette’s history of running illicit substances across the ocean. “Those boats weren’t used the way we intended, but that’s part of the bad boy image that does exist. These days, it’s more about how crazy a customer can make a paint scheme. They ask for cartoon characters a lot. We’ve got a guy running around with a Tasmanian Devil on the side, and another who has giant tiger eyes painted on there.”

While there’s no limitation to what in-house painters can put on a boat, there are some power thresholds, like when you literally can’t shoehorn another motor on the back. “Seven Wouldn’t Fit” would be the ideal name for a Cigarette boat, don’t you think?