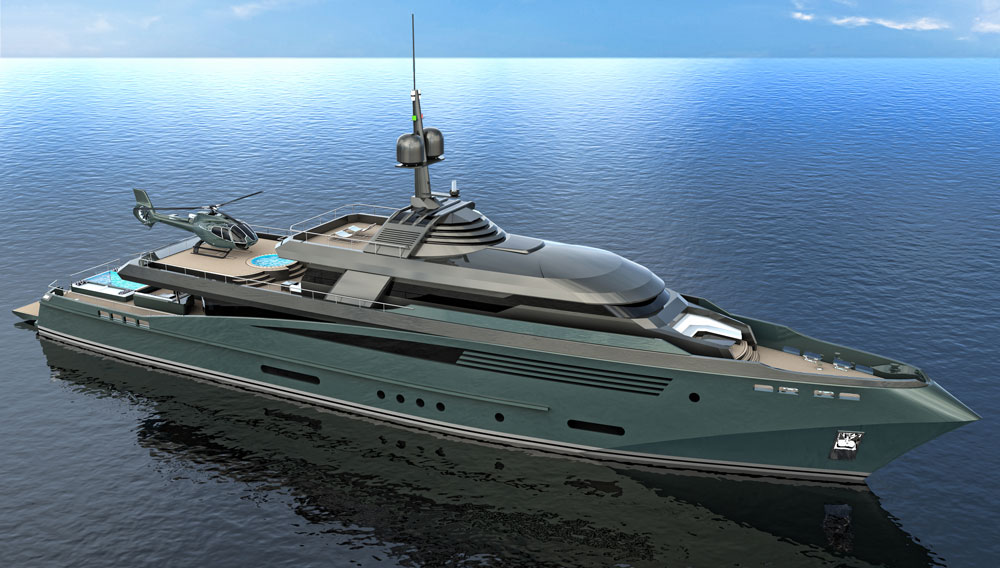 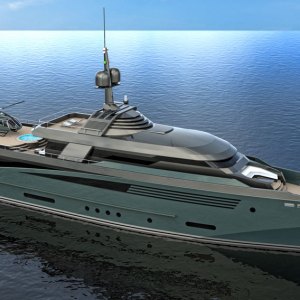 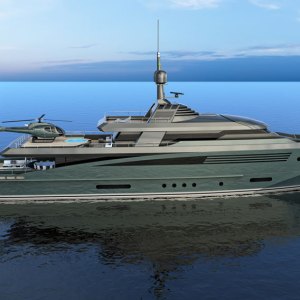 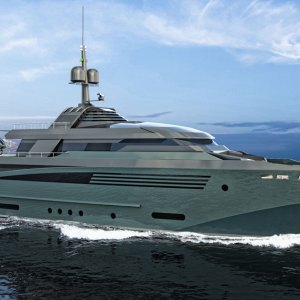 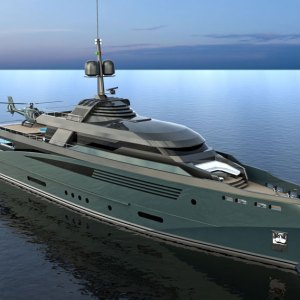 Expedition yachts are often clunky-looking boats, built for crossing oceans rather than for marina-hopping around the Mediterranean. Many are loosely based on offshore trawler designs—think the TV show Deadliest Catch—with long-distance, seaworthy hulls and simple, Spartan interiors. Others may resemble traditional stacked wedding-cake superyachts, but with ice-class hulls, oversize fuel tanks, and voluminous freezers that enable them to venture farther and longer than most pleasure cruisers can. The Italian designer Federico Fiorentino—whose recent Belafonte superyacht concept caught our eye—has developed a new twist on the explorer yacht.

The Federico Fiorentino Queequeg concept superyacht is a 177-foot expedition vessel that looks more like a futuristic military cruiser than a salty trawler. Its dark-gray exterior features crisp lines and a very sleek, lowriding profile. The bow is sharp and sudden, with a wave-slicing cut in the forward portion that gives it a distinctive look. Named after the tattooed South Seas chieftain in the Herman Melville novel Moby-Dick, who leaves his island to explore the world, Queequeg seems an ideal name to match the vessel’s tough-yet-sleek and adventurous attitude.

Fiorentino has built a career of designing yachts with strong personalities infused with elegance and comfort. The six-cabin yacht will accommodate 12 guests, with space for a crew of 13. The design includes a 950-square-foot owner’s suite located on the upper deck that boasts a private rear terrace, an enclosed gym, and a skeet-shooting platform. The full-beam, 860-square-foot VIP suite on the main deck is nearly as lavish. The other guest and crew quarters are located on the lower deck. On long voyages, guests can amuse themselves in the “virtual room,” which converts to a cinema or virtual golf course or shooting range.

The yacht was designed both for traveling long distances in comfort and for granting full access to the elements. The design allows for two possible pools on the yacht, on the main deck and upper deck (beside the helipad). The nearly full-beam swim platform, which opens onto the water at the stern transom, makes an exceptional beach club. Fiorentino has also designed a roughly 400-square-foot spa and wellness center into this aft area. The tender garage can accommodate two large tenders, plus an optional 32-foot military patrol rigid-inflatable boat (designed by Fiorentino for the Italian military).

After roaming the seven seas, Queequeg will still look right at home amidst the various leisure yachts populating marinas in the Mediterranean and Caribbean, though its rugged good looks will certainly help it stand out before heading off on another globe-trotting adventure. (federicofiorentino.it)