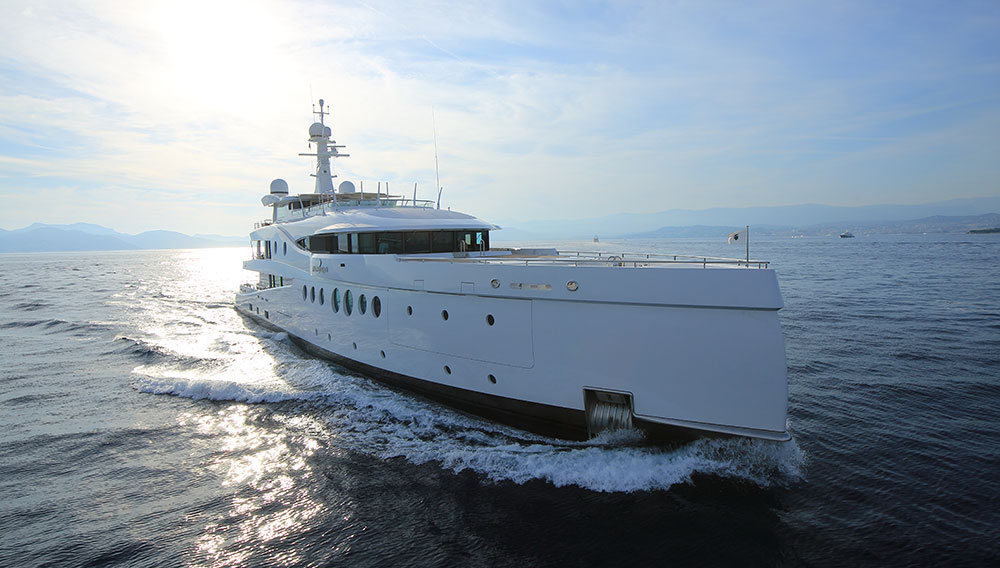 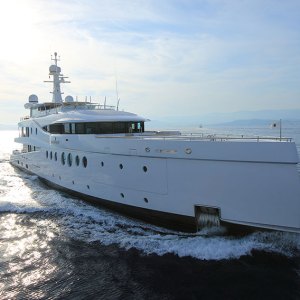 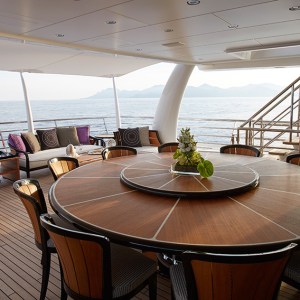 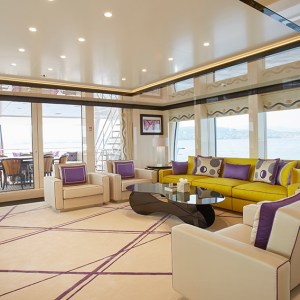 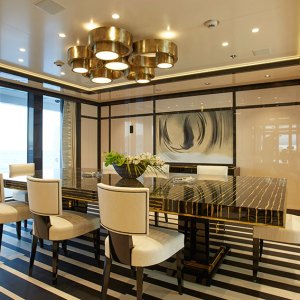 Launched by Amels earlier this year, the 199-foot Madame Kate is the second of the Dutch shipyard’s Limited Edition 199 series. The yacht was an instant favorite at the Monaco Yacht Show, winning two prestigious awards for interior design and technical innovation on the show’s opening night.

Madame Kate was built for a Brazilian shoe baron who came to the shipyard looking for a custom yacht that was a significant upgrade from his previous one. He also wanted a ship that would dazzle like a film star on the red carpet at Cannes, with a profile both modern and handsome.

The Tim Heywood design fulfills both missions. The plumb bow maximizes the hull length for extra interior volume and makes a striking visual statement. The extra length also delivers improved fuel-efficiency beyond the traditional “clipper” bow design. The superstructure blends organically into the hull at the yacht’s stern, putting the main deck much closer to the water than on other yachts of this size.

Madame Kate’s sparkling personality also shines through with the pearlescent exterior paint that shimmers in sunlight and at night, thanks to the elaborate lighting the owner requested for above and below the waterline. “The pearlescent optical effect works like Isaac Newton’s prism,” says Arie Springvloet Dubbeld, the shipyard’s paint manager. “You have different colors in one color. You get a very elegant and refined effect. Pearlescent is basically the next step forward after metallic paints.”

The Laura Sessa–designed interior spans six cabins, including a full-beam master suite on the main deck; two VIP suites on the bridge deck; and two lower-deck staterooms connecting directly to the beach club. In the latter area, guests enjoy a sauna, a Turkish steam bath, and a swim platform granting access to the ocean.

Beyond Madame Kate’s multiple outdoor social areas, the exterior also features a touch-and-go helipad and a forward garage that houses a 28-foot limousine tender. The tender, in fact, sports the same pearlescent paint as Madame Kate, and its round portholes on the hull make it a mini version of the mothership.

Following its launch, the yacht was put through its paces last summer during a two-month cruise in the Mediterranean. “The owner is absolutely delighted with Madame Kate,” says Benoît Faure, the owner’s rep. “Of course, the Tim Heywood design is very eye-catching. But he has also remarked on the level of quality on board. For example, noise and vibrations are very low. In fact, it’s better described as an absence of noise and vibrations.”

That combination of beauty and technical advancement is exactly why the team behind Madame Kate proudly walked away from the Monaco Yacht Show with two awards in hand. (amels-holland.com)