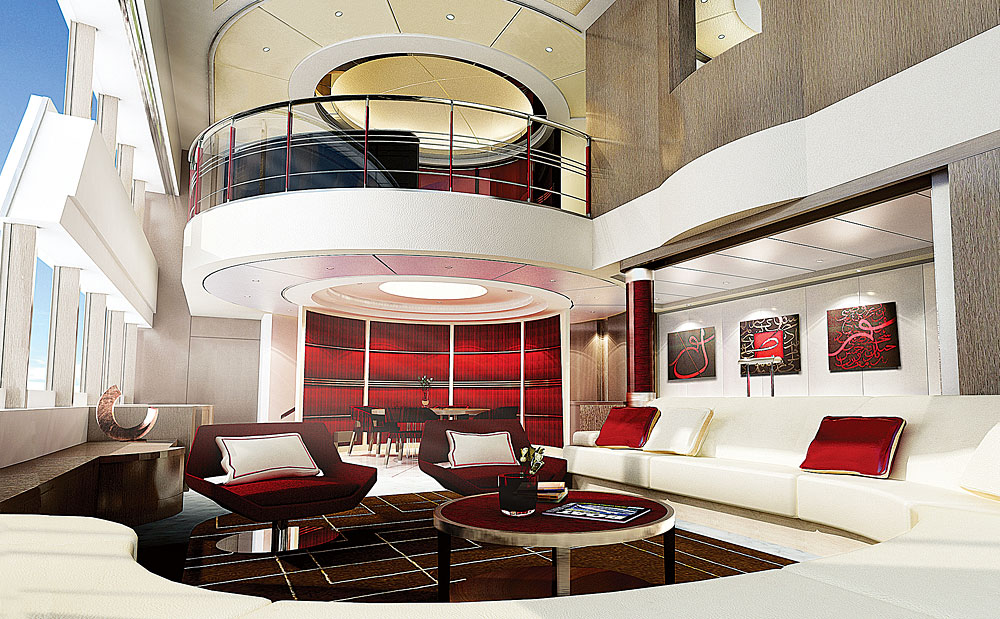 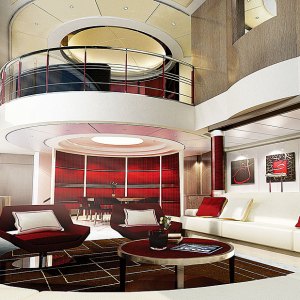 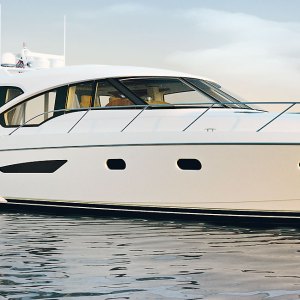 Noah’s ark, it could be argued, was the first gigantic yacht, although undoubtedly its amenities, while suitable for most of its passengers, fell short of today’s standards. The Bible states that the ark was 300 cubits long, which, given that most scholars peg a cubit at 18 inches, would place the vessel at about 450 feet, or the length of one and a half football fields. It does not seem adequate to call a boat this size a gigayacht, which commonly is defined as a vessel at least 250 feet long. So when a yacht reaches or exceeds the dimensions of Noah’s boat, what should we call it? A terayacht?

Just a handful of terayachts exist today, but within the next few years, this rarefied group will be joined by three others. Each reportedly will measure more than 500 feet long, and one of them, at 558 feet, will be the largest private yacht on the planet.

Excepting Noah’s ark, the first terayacht ever built dates to the mid-19th century, when Ismail Pasha, khedive (or viceroy) of Egypt, commissioned a boat called Mahroussa (Protected). The 422-foot vessel, which was launched in 1865, was built of iron and powered by steam. The viceroy, before abdicating in 1879, had the yacht lengthened to 462 feet, and in 1905 she was extended to 478 feet. The boat, now called El Horria (Freedom), remains part of the Egyptian government’s fleet.

The next terayachts did not appear until the late 1900s. Prince Abdul Aziz, a 482-foot craft built for the Saudi royal family in 1984, held the title of world’s largest yacht until Sheikh Mohammed bin Rashid al-Maktoum, the ruler of Dubai, unveiled his 525-foot Dubai in 2005. Other colossal boats include Al Salamah, a 457-foot vessel launched by Prince Sultan bin Abdul Aziz al-Saud in 1999, and the 453-foot Rising Sun, built for software titan Larry Ellison in 2004.

Although Lürssen Yachts remains mum on the subject, the Internet is rife with rumors of an operation called Project Sunflower, through which the German boatbuilder will produce a 508-foot yacht, possibly by 2009. The boat, said to have been commissioned by a Saudi royal, reportedly has eight or nine decks and is thought to cost $300 million to $400 million. Meanwhile, Russian oil oligarch Roman Abramovich has commissioned Blohm + Voss, also of Germany, to create a 525-foot-plus vessel called Eclipse. The boat, valued at about $400 million, will join Abramovich’s already impressive fleet, which includes the 377-foot Pelorus and the 282-foot Ecstasea. The new yacht will feature a cinema, at least two helicopter pads, three tenders, and a submarine.

Estimates of the length of Eclipse vary, but none has exceeded 551 feet, so it seems likely that a commissioned yacht under development at Rainsford Saunders Design in London will, well, eclipse it. This $300-million-plus, 558-foot vessel, code-named RSD170, will tower almost 100 feet above the waterline. Her seven decks will have accommodations for as many as 35 guests and 65 crew members, including a nearly 2,000-square-foot owner’s penthouse accessible via a glass elevator and a car garage. A dance floor, swimming pool, gym, spa, cinema, library, piano bar, virtual golf range, and walk-in humidor will be among the yacht’s entertainment and leisure facilities. Rainsford Saunders expects construction to begin in about a year.

The Bible might be rife with fish stories, but it makes no mention of sportfishing boats. Such vessels did not emerge in any form until the 1930s, when they measured 30 feet to 40 feet. Now, although they do not yet approach terayacht status, these boats are growing large indeed.

The world’s largest sportfisherman appears to be a vessel called Marlena, designed by Douglas Sharp Yacht Design of San Diego, Calif. The boat, built by the Trinity shipyard in 1998, originally was 126 feet long but since has been extended to 144 feet. This craft will be put to shame, however, by a 171-foot vessel on Douglas Sharp’s drawing boards. “Let’s face it, a big boat is not always best,” says Sharp, who has been designing sportfishermen and other yachts for more than 28 years. “If you’re a tournament fisherman, you’d probably want a small, nimble boat to get to new fishing grounds quickly. But if you want looks, luxury, and the ability to travel far out to sea, a large boat is ideal.”

Sharp expects to use carbon-fiber composites to make the craft both strong and light enough to travel at speeds as fast as 37 mph. His interior layout calls for a large owner’s suite, four guest suites, five crew cabins, two galleys, a main salon, and an entertainment and game area. The project’s budget is $65 million, but Sharp notes that much depends on the final design. He and the California yachtsman who commissioned the project plan to select a manufacturer as soon as they resolve the remaining technical issues, such as the specifications for an advanced propulsion system that probably will employ blended diesel fuel. Sharp reports that his client does not expect to house any animal pairs on the boat, although he does plan to install a tank for some exotic fish. 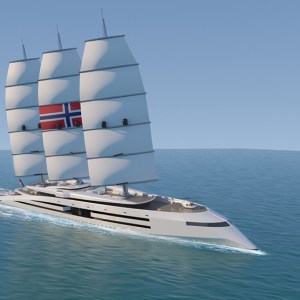 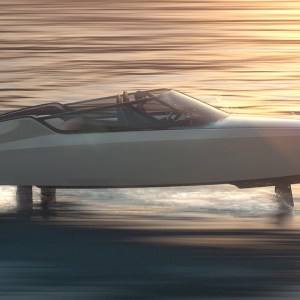