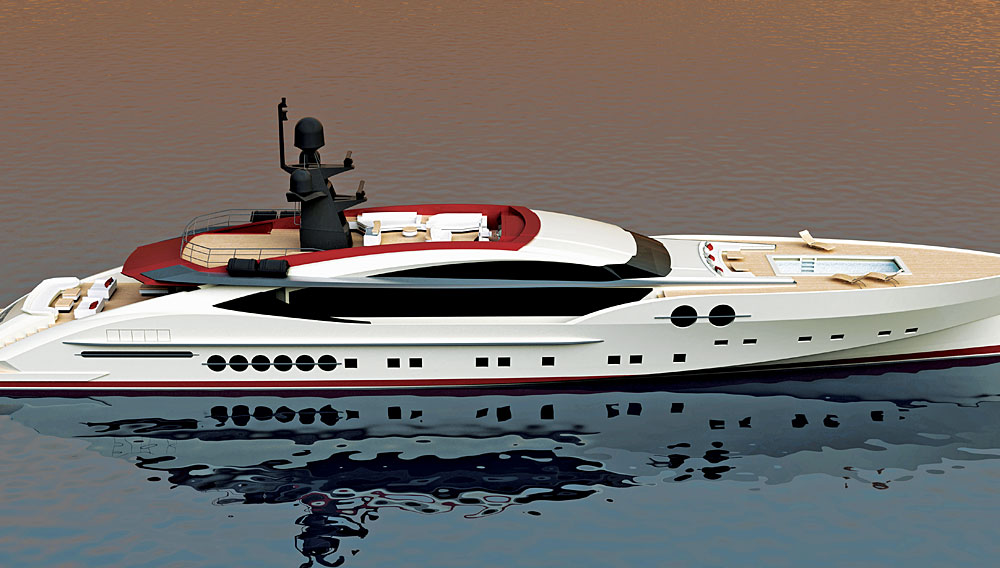 Palmer Johnson shows no signs of slowing as it prepares to launch the PJ170.

As the current economic slowdown becalms many yacht manufacturers, one U.S. shipyard is speeding ahead at full throttle. Palmer Johnson, a Wisconsin-based builder of high-performance luxury yachts, expanded its manufacturing facility on Lake Michigan in 2007, which enabled it to begin constructing hulls as large as 300 feet. Then, in 2008, the company acquired a 75-year-old Norwegian shipyard on the North Sea and opened a plant in Hampshire, England.

In July 2008, construction of the company’s first Hampshire-built yacht, the Palmer Johnson 170, commenced. The vessel will be the largest in the boatbuilder’s successful Sport Yacht series, which also includes 120-, 135-, and 150-foot models. Since introducing the line in 2004, Palmer Johnson has delivered 17 Sport Yachts; at press time, the company had reported that it was close to inking contracts for the first two PJ170s.

The new yacht will be architecturally similar to its sleek Sport Yacht siblings, all of which have been designed by the Italian firm Nuvolari & Lenard. However, the PJ170 will boast a striking new bow shape that will enable it to cut through waves more effectively and with less power expenditure. The yacht’s exterior layout will include a foredeck pool area, a flybridge sundeck, and a partially covered aft-deck lounge that connects (through two staircases)to a water-level swimming platform on the stern. The five-suite interior will feature ample communal space decorated with a variety of stones, woods, and fabrics.

Shortly after the PJ170’s launch at the Hampshire yard this coming spring, Palmer Johnson’s Norwegian facility will debut its first yacht, the 270-foot PJ World global explorer. The vessel is slated for completion in late 2010.