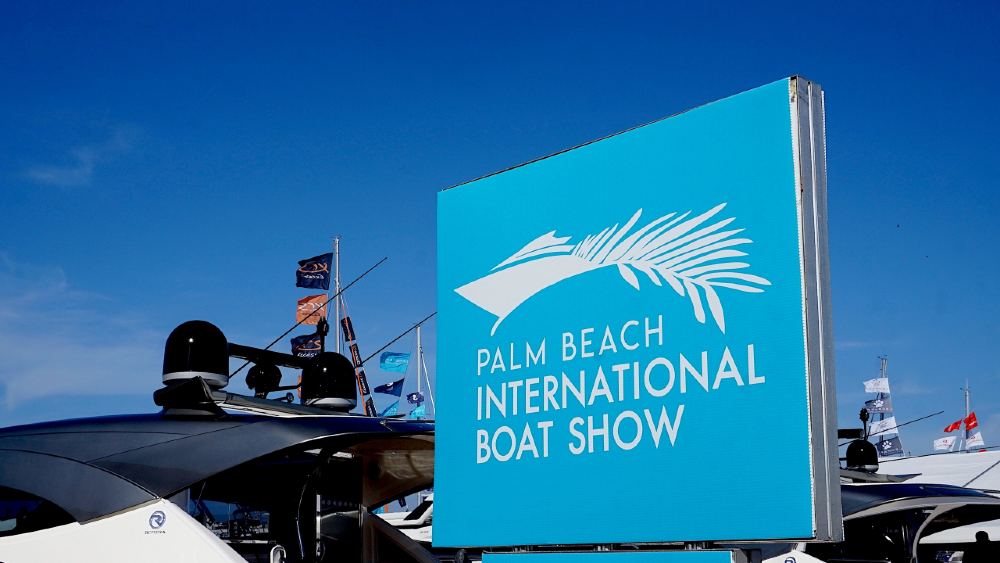 This year’s highly anticipated Palm Beach International Boat Show kicked off its four-day run with hundreds of boats, crowded docks, and excitement in the air that was palpable, following 2020’s canceled boat shows. International attendees were noticeably absent this year due to Covid-related travel restrictions, but the Informa event seemed to be more than a regional show, as the organizers had anticipated, especially since Florida is open for business.

Along with the boat-show buzz, there seemed to be a lack of interest by many attendees and some exhibitors in facial cover-ups. Despite temperature checks at the entrance and pre-show assurances from organizers that safety would be a priority, many attendees walked the docks without masks. The scene was very different from Informa’s Fort Lauderdale International Boat Show last November, where signs on the docks and Informa staff in red reminded attendees that they needed to wear masks. There were no signs of that yesterday at Palm Beach. With fewer visitors at the show, however, there was more space on the docks for social distancing.

Informa told Robb Report that it has emailed exhibitors and partners on the importance of the AllSecure mask mandates, shared the communication in person with handouts, and has red shirt safety ambassadors assigned to enforce the rule throughout the show.

The Princess X95 was one of several yachts that made global debuts at the show.  Howard Walker

A number of yacht launches and product introductions reminded showgoers that Palm Beach has become an international event. The new Princess X95 from UK’s Princess Yachts made its global debut at Palm Beach. This radically styled 95-footer, with its enclosed sky lounge and massive interior space, signals a new direction for Princess. Currently, 12 are in build at the Princess facility in Plymouth.

“It will be a true game-changer for us,” said James Nobel, Princess Yachts America’s vice president. “It offers 40 percent more interior volume than a typical 95-footer and comes with features our owners have been asking for, like a main deck master suite, an enclosed bridge and huge beach club.”

Designed with the help of Italy’s Pininfarina studio, the X95 pushes its cabins almost to the bow, and floods its interior with light, courtesy of more than 90 huge glass panels. “Yes, the design is polarizing, but when you get inside the yacht it all makes sense. It wouldn’t be an ‘X’ if it wasn’t exciting,” adds Nobel. The semi-custom X95 has a starting price of about $12 million, depending on options and interior design.

To mask or not to mask? The choice to not wear a mask by many attendees was clear on the docks and in the boat exhibits.  Howard Walker

Another Palm Beach show-stopper was Tiara Yachts’ new 48 LS, the largest outboard-powered model the U.S. company has built. The 48-footer is powered by three new 600-horsepower Mercury Verado V12s. The family-friendly day boat has several innovative features, including a modular, rotating lounge in the cockpit. It spins 360 degrees to allow for dining, time in the sun and access to the swim platform.

Vicem is using the Palm Beach show to unveil an updated version of its top-seller, the mirror-varnished Vicem 50 Classic. More evolution than revolution, the changes include a slightly bigger cockpit and a new look to the side windows. And instead of being cold-molded using wood, like Vicem’s bigger models, the new 50 Classic is molded in fiberglass, primarily to reduce costs. With twin Volvo IPS600s, and standard equipment that are often options on other boats, the 50 is priced at $1.25 million.

Keeping with the “classic” theme, arguably the prettiest new boat at the show is the Wheeler 38 from Maine-based Wheeler Yachts. The 38-footer is an almost identical replica of Ernest Hemingway’s beloved fishing boat Pilar. Wes Wheeler, whose grandfather built Hemingway’s boat in 1934, traveled to Cuba a decade ago to meticulously measure the original. With the help of Brookline Boat Yard in Maine, he built the replica—out of Douglas fir timber—and now hopes to find classic boat lovers interested in buying a modern-day version. It is priced at $1.3 million.

On public display for the first time, the Wheeler 38 is a modern replica of Ernest Hemingway’s famous fishing boat Pilar.  Howard Walker

“From the waterline up, she’s just like Pilar,” says Wheeler. “But we designed a new hull that, with twin Yanmar 370-hp diesels, can top 34 mph and cruise at 23.”

One of the most fascinating introductions, though it’s still in pre-production, was a hydro-foiling, all-electric day boat. The Navier N27 is the creation of two MIT engineers, Sampriti Bhattacharyya, CEO, and longtime boatbuilder Reo Baird, the chief technology officer.

The carbon-fiber-hulled Navier uses retractable foils to lift the hull out of the water, and a powerful electric motor connected to an 80-kW battery bank, to reach a top speed of 30 knots. Its projected range of 70-plus nautical miles at 20 knots gives it an edge over other electric day boats, according to Bhattacharyya.

One of the most interesting designs at the show was the Navier 27, an electric foiling day boat, with a range of 70 miles.  Courtesy Navier

“The retractable foils are the key here in improving efficiency,” says Baird. “They help deliver the range. Anyone who has watched the America’s Cup boats in action will know foiling is an exciting way to travel.”

Navier plans to have its first boat on the water by the end of next year, and the first customer boats in 2023. Two versions—an N27 Hardtop and N27 Open—with an estimated starting price of about $300,000.