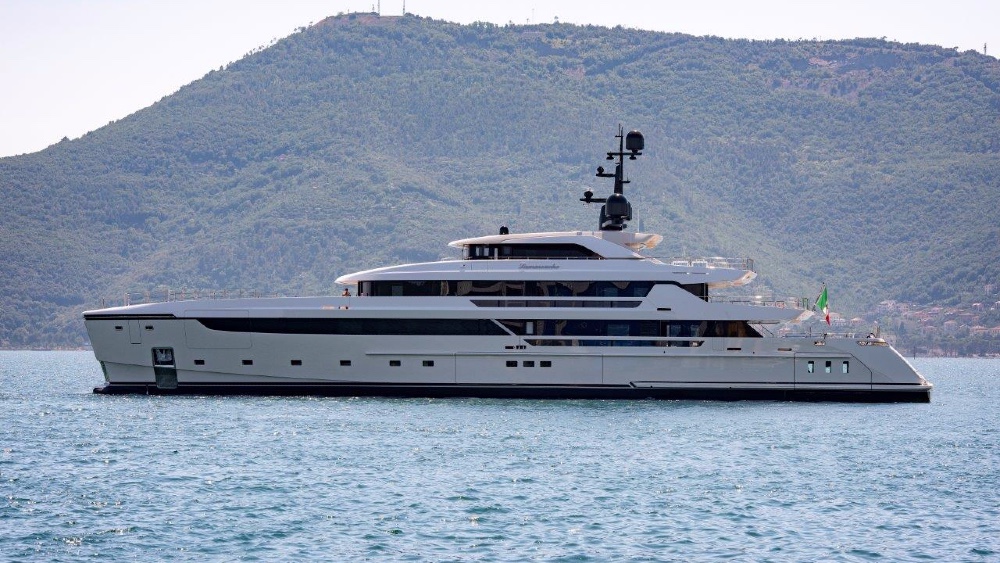 All Images Courtesy of Sanlorenzo Yachts

Sanlorenzo’s first 62Steel motor yacht left the shipyard in La Spezia this week as it moves towards final testing and delivery. The steel motor yacht’s specs include a length of 203 feet and a 39-foot beam, spread across five decks.

The Italian builder has been one of the forward-thinkers in this size range, particularly with interior layout. The design talents of Francesco Paszkowski and Margherita Casprini, who were hired to create the interior of this first yacht, resulted in light, open arrangements that made use of the high ceiling, big swathes of glass and wooden floors.

The most significant is the owner’s apartment on its own deck, with a total of 2,260 square feet, both inside and out. The master apartment, which includes a palatial bedroom, study, two large bathrooms and a walk-in dressing room, snaps up about 1,050 square feet of that total, while the owner’s deck bestows 1,325 square feet of unadulterated privacy.

Launched last week, the first 203-foot 62Steel has a palatial owner’s suite designed into its own private deck.

The master bedroom, for instance has more windows than walls around the bed in the center, with a huge gaping glass door in front leading to the outer terrace.

The main dining area also has an indoor/outdoor look, with even wider sliding glass doors that lead out to the rear cockpit. With the doors open, the two areas feel like one huge space, especially since the teak flooring is the same.  This interplay of glass and light defines the 62Steel’s interior.

The beach club on the deck below also makes use of the swimming pool above, with a glass ceiling that shows the aquamarine water and sky above. There is an air-conditioned spa area in the center, along with exercise equipment in the gym, which faces the water, thanks to floor-to-ceiling windows.

The owner’s cabin is actually an owner’s palace, with sweeping views on the private deck adjoining the bedroom.

The first 62Steel was going to debut at the Monaco Yacht Show, before it was cancelled last week, while the second is scheduled for delivery in April 2021 and the third at the start of 2023.

Here are some other images of the yacht.