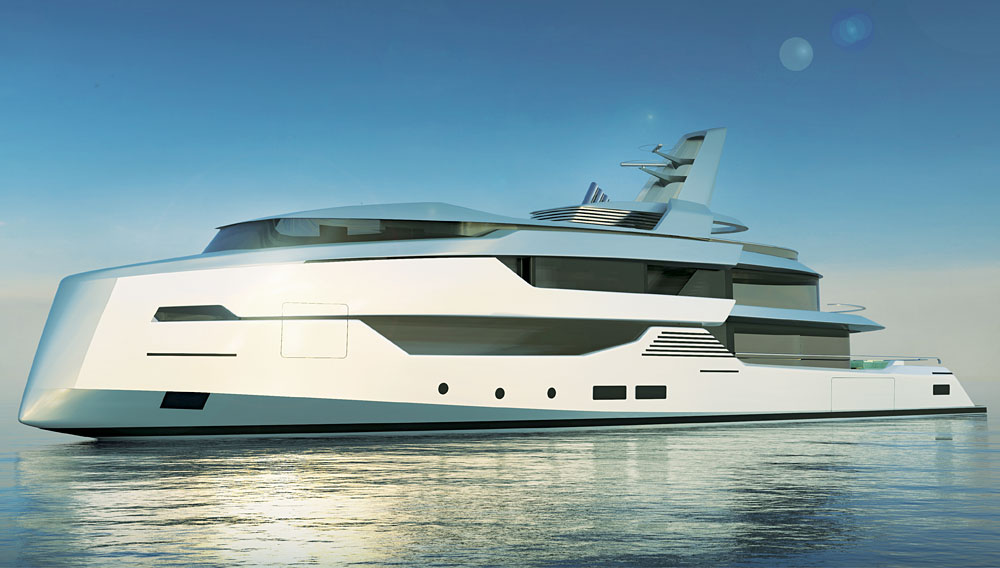 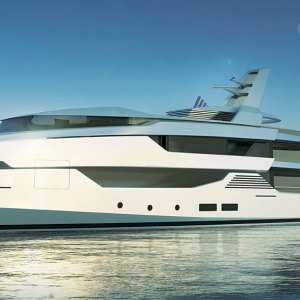 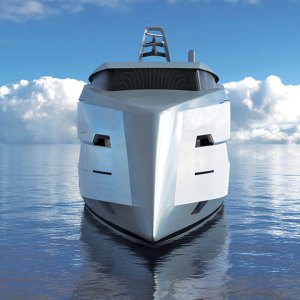 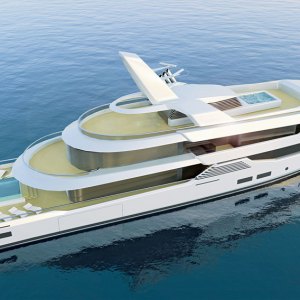 Starting at about $92 million

™In designing a megayacht, a small change can make a big difference. Bannenberg & Rowell Design has taken this tenet to an extreme with the striking and unconventional vessel that the London-based firm is offering to one Robb Report reader. By altering a few fundamental architectural elements—including placing the wheelhouse farther forward and raising it slightly, eliminating the distinction between the aluminum hull and superstructure, and pairing an extended waterline with a raised, vertical bow—the company has designed a 190-foot, four-deck motor yacht with a massive interior, efficient performance, and a look unlike anything else on the water.

“When you change around some of the conventional building blocks of exterior design, you remove the shackles limiting interior space,” says Simon Rowell, who co-owns Bannenberg & Rowell Design with Dickie Bannenberg and serves as its creative director. “And what you end up with is a more interesting design with a smarter interior layout.”

The 10-year-old company—which descended from the brand that Bannenberg’s father, the renowned yacht designer Jon Bannenberg, founded in the 1960s—has designed the interiors for some 30 vessels, including Heesen’s newly launched Galactica Star. The firm is now venturing into exterior design: Its first boat—a 230-foot motor yacht currently under construction at a major Dutch shipyard—is scheduled for completion in 2016.

“One of the things we obsess over when designing boats from scratch is internal circulation,” says James Carley, Bannenberg & Rowell’s senior designer, who helped conceive the exterior of this gift’s yacht. “We addressed this issue by letting some of our goals for the interior dictate aspects of the external structure. That sort of communication between interior and exterior design tends to make for a better boat.”

Carley estimates that this yacht will have a gross tonnage of approximately 1,230, which is typical of vessels 20 to 40 feet longer. Much of this extra interior volume owes to the boat’s layout and exterior styling, including design elements such as the forward location of the raised wheelhouse. In addition to helping create a large enough space at the bow for an enclosed mooring deck, this placement also frees up a significant amount of room on the yacht’s bridge deck, allowing for the addition of a sky lounge or cinema—rare features on a yacht this size.

Additional highlights of the interior, which could sleep 12 guests and 15 crew, include a central elevator reaching all four decks, a massive owner’s suite with a private full-beam balcony and a hot tub, and a huge main saloon with full-height windows and the capability of opening to the aft deck. The yacht’s design also calls for a tender garage with port and starboard fold-down doors, and a water-level beach club with large hull windows and a hinged transom door that opens to the swim platform at the stern. The yacht’s exterior spaces include a more than 2,300-square-foot sundeck complete with an outdoor dining table, spacious lounging pads, and a pool, and an aft deck with a 13-foot-long glass-bottom pool that looks down into the beach club below.

The yacht’s engine room—one of the heaviest areas on a motor vessel and one that is usually located slightly aft—is set amidships. This arrangement will help reduce drag when paired with the yacht’s vertical bow and long waterline, which runs nearly the entire length of the yacht. “This follows sailing theory,” says Carley. “By stretching the waterline, we’ve made the hull’s angle of entry through the water as narrow as possible, and the longer the waterline length, the more efficient the boat is going to be.”

Performance and amenities aside, the yacht’s futuristic exterior is what will likely garner the most attention. Rowell says that he would take the design, which will require at least 3 years to build, to one of the more forward-thinking shipyards such as Heesen, Feadship, or Abeking & Rasmussen. These yards, he explains, have reputations for building yachts from scratch—and are not afraid to break with convention.