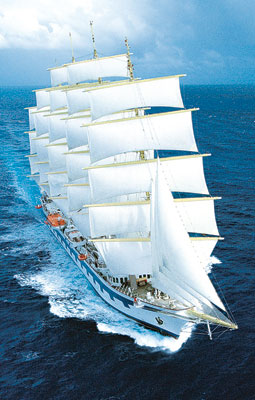 Mikael krafft is not happy unless he is building a boat. The Swedish founder and president of Star Clippers, a specialty cruise company in Monaco that offers itineraries aboard tall ships, has been commissioning the construction of private yachts and commercial vessels for more than 30 years. His most epic vessel is the Royal Clipper, the grandest of Star Clippers’ fleet of three. The 439-foot Royal Clipper is a replica of the Preussen, the only other five-masted, full-rigged ship ever built. (“Full-rigged” means that the sails on the ship’s five masts are square.) The German original, a cargo ship that was completed in 1902, met an ignominious end in 1910, when it collided with a steamer and, despite tugboats’ rescue attempts, was swept onto the rocky coastline of Dover, England, and wrecked.

The Royal Clipper, launched in 2000, has enjoyed a more pleasant fate, but the ship was exceedingly difficult to complete; although it certainly resembles the turn-of-the-century Preussen, it carries people, not goods, and therefore it had to contain creature comforts such as swimming pools, bars, a library, a fitness center with a spa, and a multistory dining area in the style of the ocean liners of old. It also conforms to modern maritime building and safety codes. “It was extremely complex,” Krafft says of the Royal Clipper project. “We wanted to make a vessel that was seaworthy and good, but we also wanted it to be faithful to the Preussen, and we didn’t want it to be symbolic—we wanted a real ship. We had to find a lot of solutions.”

Krafft employed two European shipyards and countless craftspeople during the Royal Clipper’s construction, which took almost four years. As challenging as it was to build the Royal Clipper, he says he would recommend the experience to others. In fact, Star Clippers has agreed to assist a brave soul who wishes to repeat Krafft’s feat and create a personal tall ship. “It would be very, very good if you had a lot of shipbuilding experience, a combination of yacht and commercial vessels. You also have to be actively involved in it yourself, and have big pockets, and a lot of patience,” he says, laughing. “At the same time, I say do it. It’s a lot of fun.”

This personal tall ship package begins with a weeklong trip for two aboard a Star Clippers vessel so that you can study the ship in depth and speak with its crew to better understand how the vessel operates. Star Clippers has three vessels: Royal Clipper, Star Clipper, and Star Flyer.

The 439-foot Royal Clipper features 42 sails and 56,000 square feet of sail area, and its tallest mast is 197 feet; more than five and a half miles of stainless steel rope hold the five masts in place. Royal Clipper can accommodate 227 passengers and 105 crew members. When it is not sailing under wind power, Royal Clipper relies on twin Caterpillar diesel engines that generate 2,500 hp. The engine’s exhaust fumes pass through the hollow steel jigger mast at the ship’s stern.

You will meet with Star Clippers founder/owner Mikael Krafft to discuss your tall ship project and receive his counsel.

Star Clippers will arrange introductions to key persons at the shipyards that built the vessels in its fleet. For example, Lenin shipyard in Gdansk, Poland, built Royal Clipper on an existing steel hull that it lengthened and altered to specifications. Merwede shipyard in Holland completed the ship’s interior.

A figurehead made to your specifications will provide the

finishing touch for your tall ship. Artists Claus and Birgit Hermann created the striking figurehead for the Royal Clipper, modeling it to resemble Krafft’s daughter, Marie.

Krafft estimates such a vessel would require four years to complete, allowing 18 months for planning and 30 months for construction.