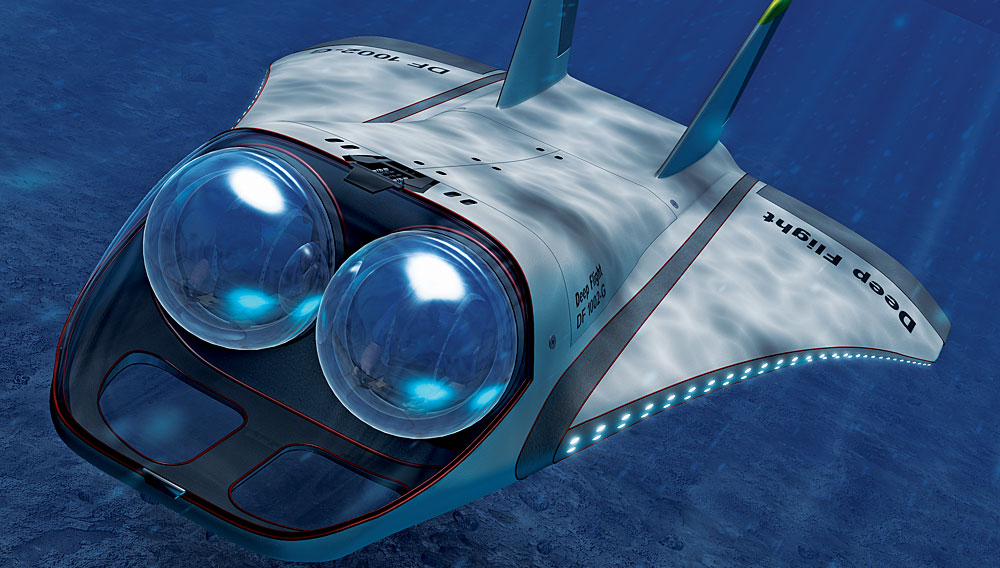 Photo by Jon A. Bell

A trip to the Bahamas for three days of training in the glider with its signer, Graham Hawkes.

Graham Hawkes is something of a mad scientist in the world of water-going vessels. As part of his company’s Deep Flight line of submersible recreational gliders (see Robb Report, August 2009), the chief pilot and designer for Hawkes Ocean Technologies has brought to fruition such outlandish concepts as the Super Falcon and the Merlin—models he created, respectively, for venture capitalist Tom Perkins in 2008, and for Virgin chairman Richard Branson last year. Hawkes also designed a submersible for the late adventurer Steve Fossett, who intended to set a new depth record with it. Now, with this gift, Hawkes is offering one Robb Report reader the keys to his newest Deep Flight creation.

The yet-to-be-named submersible, which incorporates elements of the model intended for Fossett, will be a two-person craft that resembles a bug-eyed manta ray with F-18-like vertical stabilizers. Indeed, the vessel will have almost as much in common with a high-performance jet as it will with a standard submarine. “It is a more advanced, aesthetically beautiful craft than a traditional submarine,” says Hawkes. “The pressure-hull configuration is identical to the Fossett sub, but the materials limit it to a depth of one mile.”

While this craft will not break any depth records, it will represent the newest evolution in the Deep Flight family. Like the previous Deep Flight vehicles, the new submersible will be equipped with wings similar to those on an airplane or glider, allowing it to safely reach greater depths than can conventional submarines (which use water-filled ballast tanks to sink, and displace the water with compressed air for buoyancy). Deep Flight crafts employ electric motors for propulsion as the wings provide negative “lift” to drive them down. The crafts themselves are buoyant, so when the engines are shut off, they simply glide back to the surface. Unlike with conventional subs, the machines still rise to the surface if the power fails.

“You’re actually in an unsinkable submarine,” says Hawkes, adding that the winged design also makes his creations far more agile than conventional submersibles, which rely on variable ballast and thrusters for maneuvering.

The Deep Flight submersible Hawkes has designed for this gift will employ a joystick with three-axis controls (pitch, roll, and yaw), making it nimble enough to do barrel rolls with whales. Cavorting with marine life will be all the more exciting thanks to the craft’s two bulbous acrylic canopies that share the same refractive qualities of water, which means that passengers will not sense the material between them and the outside environment. To increase visibility at great depths (sunlight is imperceptible by humans beyond a depth of about 300 feet), Hawkes designed this sub with low-output “blazers” along its wingtips to illuminate, without blinding, any creatures it might encounter along the way.

As it descends to its approximately one-mile maximum depth, the sub will reach well into the undersea region known as the bathypelagic zone, or midnight zone, where recognizable sea life gives way to countless rare species, only about half of which have been cataloged. “It should be a very beautiful aesthetic experience in the ocean,” says Hawkes. “And when coming up, you’re traveling through three-dimensional space populated by these strange animals.”

Following the construction of his or her submersible, which will take between eight and 10 months, the recipient of this gift and a guest will join Hawkes in the Bahamas for a three-day training session in the new craft. Hawkes and the recipient will descend to a depth of one mile in the waters off the Bahamas known as the Tongue of the Ocean, an inky world where the sun does not penetrate, where mysterious creatures abound, and where any scientifically minded individual is sure to be filled with wonder—if not a bit of madness.