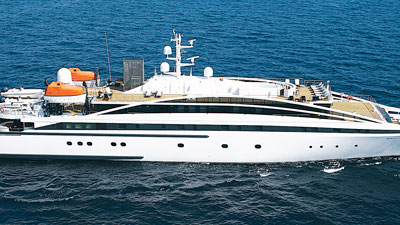 A premium membership in the invitation-only yachting club Private Sea. The membership includes first right of refusal on chartering the next five additions to the club’s fleet.

An optional 12-day trip for six to Antarctica aboard Revelation, a privately chartered yacht.

As souvenirs of the Antarctica trip, a limited-edition collection of photographs by Frank Hurley, who accompanied British explorer Ernest Shackleton on his famous 1914–1916 expedition, and a signed first edition of Shackleton’s book South: A Memoir of the Endurance Voyage.

Chartering a yacht for a cruise through the Caribbean or the Mediterranean is a fine way to spend a vacation, but unless you have not been to either region before, the voyages will not expand your horizons. Chartering a yacht for a journey to Antarctica is another matter, however, and Private Sea, an invitation-only yacht-charter club headquartered in London, is offering a trip to the continent to the Robb Report reader who acquires a premium club membership.

Private Sea suggests a 12-day voyage for six aboard Revelation, a 180-foot yacht that received a new master stateroom, a salon with a fireplace and a plasma TV, and a helipad during a refit that was completed in June. Built in 1964 and capable of accommodating 12 guests and a crew of eight, Revelation can achieve a top speed of 16 mph.

Private Sea recommends an itinerary that departs from and returns to Ushuaia, a town of about 50,000 at the southern tip of Argentina, sometime during the Antarctic summer, which lasts from December through March. You can visit Elephant Island, where 22 men from British explorer Ernest Shackleton’s ill-fated 1914–1916 Imperial Trans-Antarctic Expedition waited for their leader and five other crew members to arrange their rescue. Although Shackleton did not achieve his goal of being the first to cross the frozen continent, he became a hero when he brought his entire team home safely. In addition to a signed first edition of Shackleton’s 1919 memoir of the expedition, you will receive the Hurley Collection, a limited-edition boxed set of 65 prints made from the negatives that photographer Frank Hurley shot during the trip, and a large vintage print of Hurley’s Long, Long Night, which depicts the doomed Endurance trapped in the pack ice.

Other places you can visit in and near Antarctica are Port Lockroy, a British World War II outpost that is now a museum and a favorite nesting site of gentoo penguins; Deception Island, where you will find numerous chinstrap penguins; and the scenic Palmer Archipelago, located off the northwestern coast of the Antarctic Peninsula.

Revelation is equipped with two vehicles offering perspectives on Antarctica that Shackleton never had: a Perry PC-12 submarine, a 23-foot-long, 8-foot-wide, 9-foot-tall vessel that accommodates three and can dive to a depth of 1,000 feet; and an R44 Robinson helicopter, which can seat three passengers and has a range of 400 miles, ample for excursions over the more forbidding stretches of landscape.

The buyer must meet Private Sea’s criteria for membership. The Antarctica trip is available November through March only. Certain activities may be canceled if conditions are unfavorable.

Launched in May 2004, Private Sea offers access to more than 800 yachts that are generally available for charter. It also maintains a smaller fleet of 51 vessels, some of which are available only to its members. The Antarctica voyage is offered as part of a premium membership that Private Sea has created expressly for a Robb Reportreader. Normally, the club offers four forms of nonowner membership, which provide a bank of points that can be applied against future Private Sea yacht charters. The Indigo membership offered here comes with 24,000 points, twice as many as Cobalt, the next-highest membership. Although the Antarctica trip would consume most of the points, enough would remain to charter a 160-foot yacht for a week during the Mediterranean high season.

This Indigo membership also includes the chance to be the first to charter the next five yachts that join the Private Sea fleet. Recently added vessels include Zoom Zoom Zoom, a 161-foot Trinity that can reach a speed of 26 mph, and RM Elegant, a 237-foot, 3-year-old power yacht that can sleep 30 in its 15 cabins.