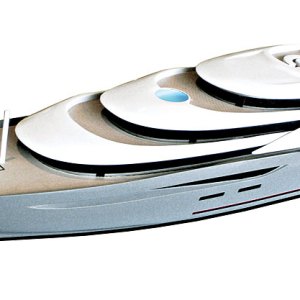 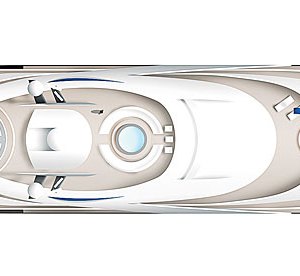 At the edge of the marina at Monaco, near a row of white gigayachts, Rupert Mann sits among photographs of existing vessels and renderings of proposed designs. It is a Friday morning during September’s Monaco Yacht Show, and Mann is here to welcome visitors to his firm’s booth, which is located on the bay’s east side.

The pictures on display include one of the 162-foot Eden, a 1930s motor yacht that Mann and his business partner, Tim Saunders, recently restored. (The vessel herself is anchored in the bay.) Also among the images is a rendering of what will be the world’s largest private yacht, a 558-foot giant commissioned by the hotel group Aquiva. Here, too, are a model and images of a 459-foot-long, 72-foot-wide, six-deck beauty that Mann and Saunders will build for a Robb Report reader for a price beginning at $250 million.

A handsome 39-year-old, Mann seems a bit young to be creating yachts this large—shouldn’t you have to work up very gradually to projects of this sort? But in fact, the 558-footer was the first commission he and Saunders received after they established their London-based company, Rainsford Saunders Design, or RSD. (Rainsford is the last name of one of Mann’s grandfathers, an architect who first interested Mann in design.)

“Tim and I met right here, at the Monaco show in 2002,” Mann explains, “and we clicked immediately. I began my career in interior architecture, specializing in high-end hotels. Tim is a naval architect who trained under some of the world’s top talent: Andrew Winch, Espen Oeino, Frank Muldart, and others. We’ve been busy since we started out.”

Assuming that someone orders the 459-footer soon, Mann says, RSD could complete the design, select the builder and outfitter, and deliver the vessel as early as the summer of 2011.

The design currently features a top-deck VIP suite and 13 other suites of various sizes, accommodating a total of 36 passengers. Additional quarters will hold as many as 43 crew members. A helipad on the flybridge will enable the owner to proceed directly from a helicopter to his suite, while another helipad on the foredeck will serve guests. The vessel will cruise at 17 mph and reach 25 mph, an impressive speed given its size.

Mann says that one of his goals is to create relatively expansive interior spaces. “Most superyachts look good from the outside, but the interiors feel cramped,” he says. “For example, most suites have only about 6 or 7 feet of headroom. But in this yacht, we’ve raised that to 10 feet.” In his plans for the dining area, he has doubled the ceiling height and fronted the space with a vast window that will provide a spectacular view of the sea or shore.

RSD has employed its design for the 459-footer as a showcase for its research into the latest nautical technology. For example, the plans feature a broad array of security devices (see “Defense Project” below). The yacht also will be capable of spending long periods at sea while making a minimal environmental impact, according to RSD. The boat will use electric Azipods to convert petroleum energy into electrical energy, boosting maneuverability and propulsion efficiency. Solar panels and a wind turbine will address the yacht’s additional electrical needs, and water recycling and desalination systems will provide sufficient water for long trips. And if a passenger or crew member is stricken or injured while at sea, he or she can be taken to an onboard hospital equipped with emergency resuscitation gear and a robotic surgery device that enables doctors to operate remotely from land.

The yacht’s plans also call for a 20-foot-long pool sitting aft and three hot tubs on the top decks. The vessel could accommodate such water toys as a 33-foot high-speed tender, a dive boat, two ski boats, six Jet Skis, and an 11-person submersible.

The murder in 2001 of yachtsman and environmental activist Sir Peter Blake by pirates off the South American coast reminded mariners that the sea holds more than just natural perils. “Superyachts constitute a headache for any security chief,” notes Tim Saunders of Rainsford Saunders Design (RSD). “They lack any sort of buffer zone between the accommodation and the outside world, and anyone, in theory, can approach to within a few feet without breaking any laws.” In response to its clients’ concerns about safety, RSD incorporated a number of security features into its plans for its 459-foot yacht. Cameras, including infrared ones, and long-range radar will spot approaching vessels, and a Cerberus diver detection system will sense any underwater threat that comes within a mile radius of the yacht. The hull will be armored with ceramic, and the windows will receive a polycarbonate glazing capable of stopping long-range, high-caliber ammunition. The yacht also will be equipped to deploy tear gas and smoke bombs and to entangle a vessel’s propellers in a high-strength net. If escape is required, passengers and crew can use an armored, high-speed tender or an 11-person submersible that exits through the bottom of the boat’s hull. The submersible will dive to a depth of 1,300 feet and hold enough oxygen to sustain its passengers for at least 24 hours. During less threatening times, of course, the sub will offer a splendid way to explore the sea.