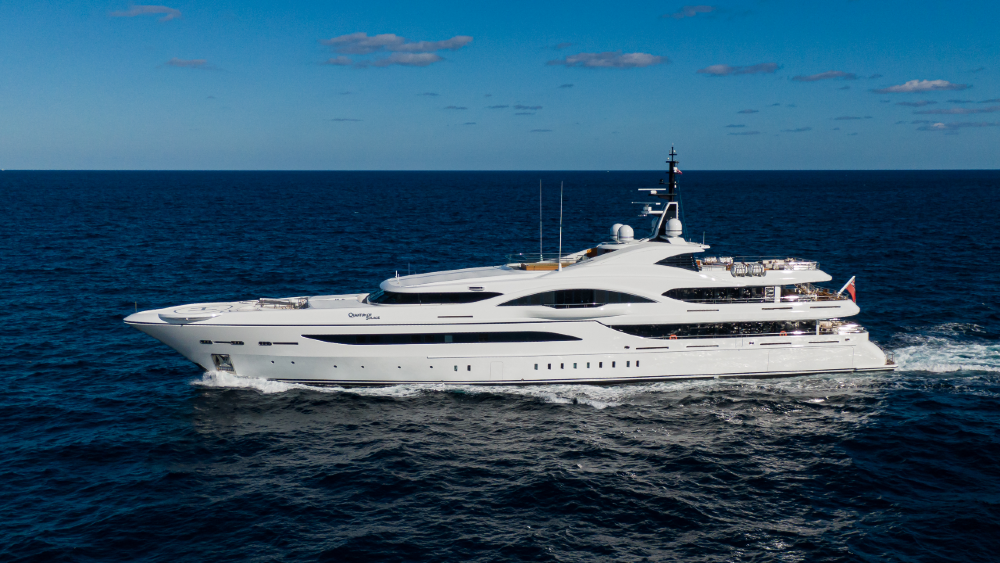 A wry smile from Hollywood actor Daniel Craig is all that is needed to summon the image of James Bond. But if you mention a 007-themed superyacht, it’s the name John Staluppi that springs to mind. The recognition is well-earned. The serial yacht owner’s latest 238-footer, Quantum of Solace, comes with designs that even Q would marvel at.

The Brooklyn-born businessman has owned 27 boats over the course of 30 years and has named each of his superyachts after a James Bond film. The 118-foot For Your Eyes Only, built in 1985 by Denison, marked a step change from Staluppi’s smaller fishing vessels and was the first motoryacht in the US to have a combination of MTU engines with water-jet propulsion.

But it was his second 007-inspired yacht, Octopussy, that gave Staluppi fame outside the yachting world, and made the Bond names more than a gimmick. Built in 1988, the 144-foot Heesen had an earth-shattering top end of 61 mph—a speed that every other shipyard at the time said couldn’t be done. Octopussy immediately entered the record books as the world’s fastest yacht.

This superyacht is just one of four in the world to have a double-height atrium on the interior.  YPI

“That record was important to me because when you pull into any place there’s always a bigger boat or a prettier boat, but there’s not many people who can say, ‘Hey, this is the fastest yacht in the world,” Staluppi told Robb Report.

Over time, Staluppi has fine-tuned his requirements, saving adrenaline kicks for his cars, helicopters and jets. Today, he prefers his yachts to have a top speed of about 21 knots, transatlantic capability, and plenty of interior space. That’s exactly what Quantum of Solace provides.

Built by Turquoise in 2012, Quantum of Solace is one of just four yachts in the world to have a double-height atrium in the main salon. For Staluppi, who finds the excitement and gadgetry of Bond films a fitting association for his yachts, the design feature was a big draw. “I’ve never really seen that before and I just couldn’t imagine it. So that’s why I had to see the boat,” he says.

The contra-flow pool is another unusual feature that Q might have designed.  YPI

Staluppi liked the design a lot. Beyond the aesthetics, he is a pragmatist about his yachts. He noted that Quantum’s garage was set up with user-friendly cranes, the beach club had door openings at water level. The boat also had a 16-foot contra-flow swimming pool “that you can actually swim in” and a professional DJ station on the sun deck that doubles up as a versatile heli-deck.

It’s also the first yacht that Staluppi and his wife have spent an unprecedented eight weeks aboard. When Covid-19 hit and his preferred cruising grounds of Europe closed, they traveled from Maine to Boston, around Nantucket and Greenport, and dropped anchor off of Martha’s Vineyard.

Over the years, Staluppi has moved from building super-fast superyachts to ones emphasizing space and comfort.

“I’m the last guy that wants to anchor out, but this boat is just so stable you don’t even know you’re anchoring. I never thought I’d be able to do that,” he says.

Years of being intrinsically involved with the design, build and sale of so many yachts has made Staluppi a sought-after consultant for both owners and shipyards. In 1998, he launched his Millennium Super Yachts fleet, in which he built yachts to order. “It’s important to have a good design from the beginning, so you don’t have to have many changes,” he says. “Of course, that’s almost impossible. Anytime you build a boat, you know you’re going to have anything from $400,000 to $2 million in changes.”

From his personal builds, 2004’s World Is Not Enough is one of his favorites. “The truth of the matter is, World Is Not Enough was the fastest yacht that we’ve ever owned; it’s just nobody ever went up to that speed,” he says. Capable of 77 mph on paper, technical issues with the boat’s steering hampered its performance.

The laid-back but luxurious Beach Club and Spa areas would work well as a setting in a Bond movie.

Spectre, built in 2019 by Benetti, came close to being his “perfect yacht,” but the top deck felt too small for Staluppi’s liking. By the time he realized that was the case, the build was too far along. Now, the serial yacht owner is focusing on his next project, which promises to have a multitude of Bond gadgets.

“I always say this is the last boat I’m building and then I’m building a new boat again,” Staluppi says. “Sometimes I get the urge to build a fast yacht again, but you give up a lot of luxury, and now I’m more into having a nice bottle of wine and a meal on board. If I want to go fast, I have a 92-foot Pershing for that.”

The sense of space throughout Quantum of Solace‘s interior was a key feature for Staluppi, who bought the yacht virtually sight unseen.

Staluppi has listed Quantum of Solace for $58 million with Yachting Partners International to make space for the new unbuilt yacht. The Turquoise-built yacht is actually the second with the same name. Staluppi made the decision name it Quantum of Solace, after the then-latest Bond movie, No Time To Die, was released. “I didn’t want to have a boat named that,” he says.

Speaking of which, does knowing that his yachts will always have to be connected to a 007 movie title ever bother Staluppi? “No,” he says. “I kind of enjoy it.”