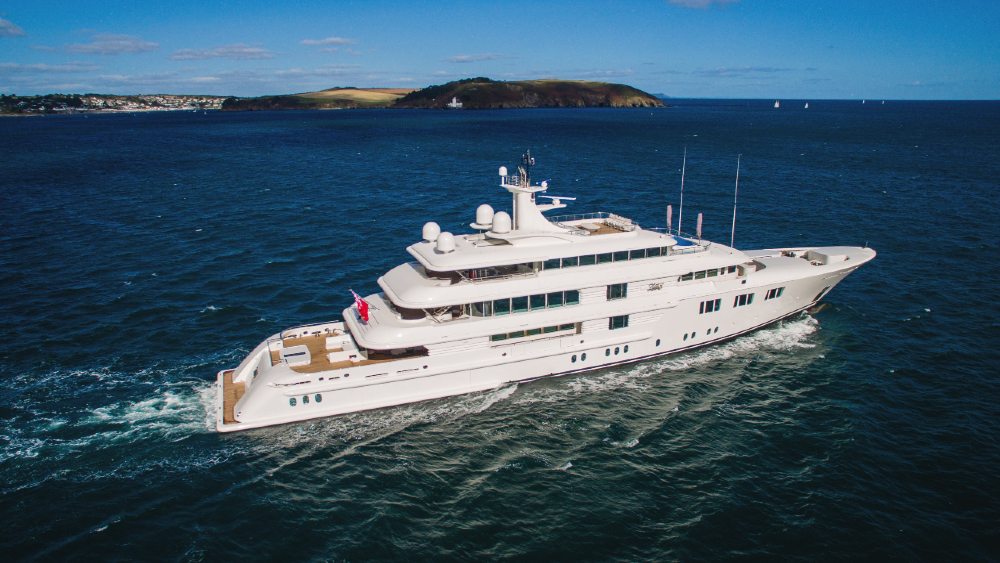 Transforming a superyacht into an even better version of its best self is more than a labor of love. It takes time and a lot of money. For the owners of Lady E, the year-long refit became the “equivalent of buying a new boat,” according to its captain. The owners, with their large, young family, are leaving this month to do a round-the-world tour aboard the 244-footer.

Originally built and launched in 2006 by Amels, post-refit Lady E is now 20 feet longer. Chief among the many additions was a 66-square-foot beach club at the stern, with a large bar and lounge space. “A rotating 77-inch screen to watch the latest movie or the family’s Go-Pro wakeboard moves was a must to allow the children out-of-water entertainment,” Kennedy told Robb Report. “In Lady E style, an Andy Warhol-painted Marilyn Monroe surfboard adorns the beach club wall.”

British shipyard Pendennis started the refit in October 2019, with little knowledge that a global pandemic would cause logistical nightmares. “Flying contractors around the world was more involved, and the temporary yard shutdown and new working arrangements added time to the refit,” says Kennedy.

The owner and his family will wake surf their way around the world, thanks to the yacht’s new G23 Air Super Nautique.  Courtesy Burgess Yachts

Still, the wait has been worth it. Above the new beach club is 120 square feet of extended lounge space on the main deck, giving the owners an uninterrupted view of the water through a glass panel. The beach club will serve as a platform for a family that loves its watersports. Both areas were finished with nightclub-spec audio and light systems.

“The owners are active, so keeping the children connected to the sea and the yacht’s activities was a key motivation for the extension,” says Kennedy. “They wanted all the guests to to participate in the broad range of activities, while enjoying the various private spaces.”

The owners made sure to supersize their watersports with a Wajer 55 tender (with plenty of upgrades), a new G23 Air Super Nautique for wake-surfing and water-skiing, not to mention toys like an electric foil, hoverboards, Seabobs, jet skis, and scuba equipment. The health motif was also written large into the refit of the interior, where the upper galley became a health spa and the former sauna was upgraded with a Turkish hammam steam-room, gym, and day head.

The rear area was extended by 20 feet so the owner could maximize the stern as a watersports platform.  Courtesy Burgess Yachts

Pendennis also added an exclusive interface system on a bespoke iPad platform, connected by more than 3 miles of cable inside the bulkheads. Kennedy says the refit of this popular charter yacht has prompted a number of unsolicited offers to buy her, but the owners plan to keep her for the world cruise. “The owners are focused on enjoying this unique offering,” he says.

They will offer her for charter through Burgess for the America’s Cup finals in March and April, but then they will continue on their world journey into the Pacific Islands from April through September, reaching Panama by November, and spending the winter season the Caribbean. They plan to cruise the Med beginning in June 2022.

Kennedy says the refit was a huge, time-consuming project, involving more than 200,000 man hours. While the owners understand the yacht now appeals to a wider client base, the primary goal was to maximize their own enjoyment.

“There will be more pampering, and much more flexibility for multiple family activities and watersports,” says Captain Kennedy. “The owners enjoy spending time with their larger family, which spans three generations. They celebrate family milestones in different places around the world. We expect that to increase.”

Check out other parts of Lady E.