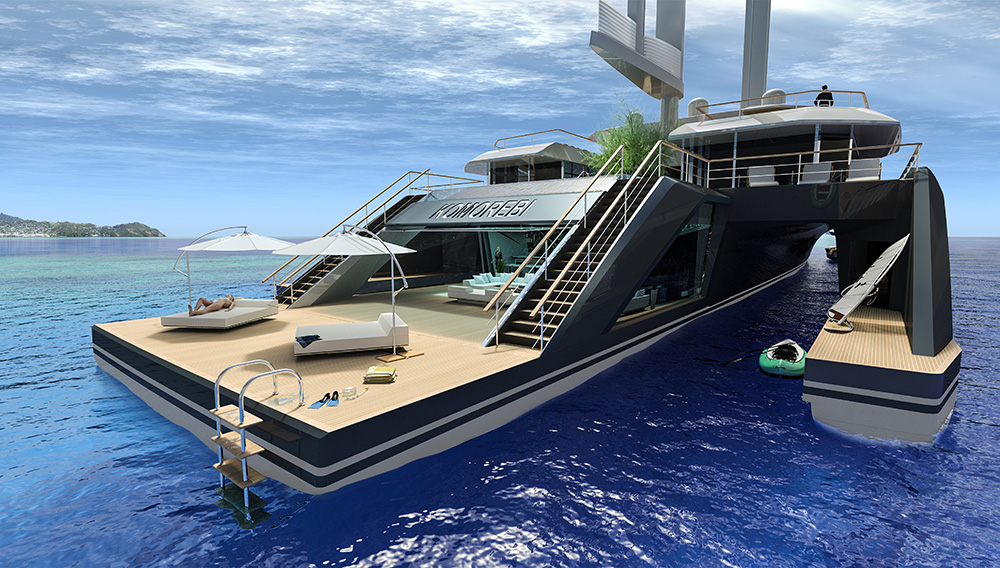 Whereas many new yachts and concepts are named for a Greek god or an exotic-sounding word that translates into something benign like “the good life,” the name of the Komorebi concept trimaran superyacht goes a little deeper. The 282-foot sailing yacht concept, penned by the Parisian design firm VPLP, is named after the Japanese word komorebi (“curtain of light”)—referring to the beauty of nature enhanced by the sun as its rays filter through the leaves of trees or through clouds after a rainstorm—a fitting name, considering the sun is an essential element for maritime bliss.

VPLP designed Komorebi to be one of the most light-enhanced superyachts on the water. The interior features floor-to-ceiling windows that literally wrap around the main deck. With the open floor plans and a large saloon, the interior looks more like an Asian-inspired Frank Lloyd Wright design than a typical superyacht. From the main saloon, one can see a small garden with a living tree; a swimming pool; and the ocean beyond. Komorebi is a true garden on the sea.

The yacht is green in terms of its propulsion systems as well. Automated wing sails help deliver speeds up to 15 knots in a 20-knot wind, so owners can cruise for weeks with minimal engine support. VPLP estimates that, in hybrid engine mode, the yacht will save 30 percent in fuel consumption during a transatlantic crossing. Solar panels across the yacht regularly recharge its batteries.

Beyond the yacht’s expansive beam, the trimaran design lets the owners store a small navy of water toys in its three hulls. Tenders, small sailboats, a submarine and more can be easily launched from the hull interiors. The vast swim platform at the transom connects to an interior beach club, with openings to the water on either side between the outer hulls. A sky-deck provides space for alfresco dining and entertaining.

The designers wanted Komorebi to look trim and elegant on the water, in part achieved by its plumb bow and banks of windows. The fixed-wing sails look subtler than the more aggressive or sporty designs found on some wing-sail vessels. VPLP wanted to avoid the military or 1930s-style cruise-ship profiles that many superyacht designers are turning out these days. “Despite the length, we want Komorebi not to appear dominant and overwhelming,” says Marc Van Peteghem, a naval architect at VPLP. “We want a sweet giant whom we can all love.” (vplp.fr)