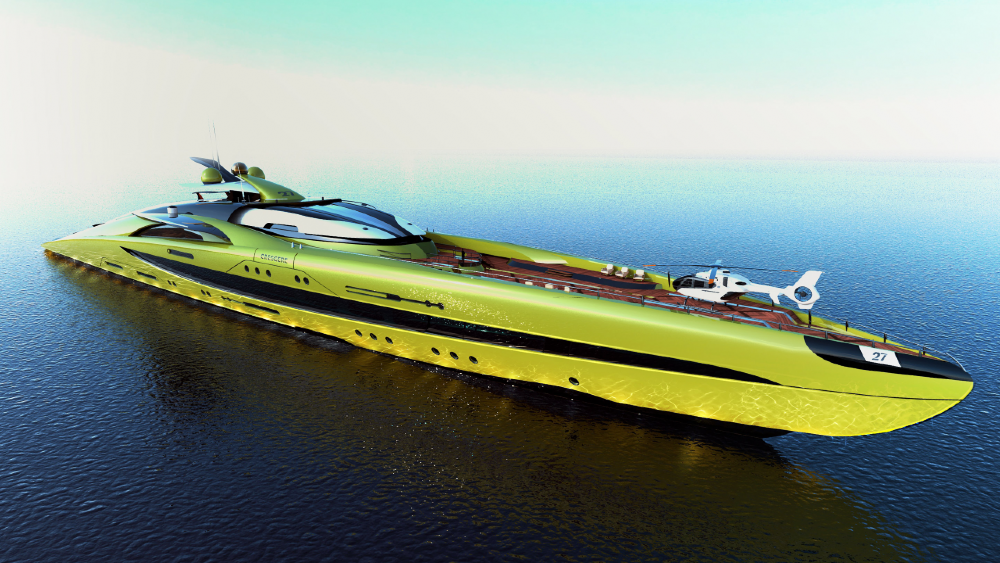 Students of Latin will know the word “Crescere” means “to grow.” Which is exactly what this stunning concept megayacht—aptly named Crescere—is intended to do. Inspired by the vision of a greenery-loving American buyer who wanted soothing, cocoon-like spaces, US designer J. David Weiss imagined plant-filled, greenhouse-like glass walls spanning multiple decks.

“The idea is to create spaces down below that are quieter and calming, where guests can relax and recharge,” Weiss, founder of the disrupter design company Designova Creative, told Robb Report.

Key to the design, he says, are expansive areas of glass in the hull that flood the interior with diffused natural light. These combine with oversized sliding glass panels that let cooling breezes pass through the yacht. Weiss, who helped pen the design of such landmark superyachts as Galactica Star, the 213-foot all-aluminum Heesen, along with the 239-foot CRN-built Yalla, quickly adds that the yacht isn’t just about R&R. The huge deck areas should also be about having fun.

The creative design includes glass panels that rise out of the foredeck to become a 52-foot lap pool.  Courtesy Designova Creative

One especially cool feature is Crescere’s 52-ft by 10-ft lap pool. Instead of being sunk into the foredeck, glass side panels rise up out of the deck to create the pool, with high-speed pumps flooding it with salt water. When not in use, or when the foredeck needs to be cleared for the helipad, the pool can empty in seconds and the sides disappear.

“Not only is it a good way of reducing weight on the bow when under way, but it’s fun to watch guests through the glass sides, splashing around,” says Weiss.

For Crescere’s hull and superstructure, the designer deliberately went against current trends for wider, taller and more vertical, or axe-bowed yachts with a longer, leaner profiles. His bow was inspired by classic J-class sailboats. “We wanted the yacht to look sleek and fast, with uncluttered lines. Even though the concept is for a yacht that’s over 400 feet, we wanted her to have the soul of a much smaller vessel,” says Weiss.

The interior, says designer Weiss, was to have a “cocoon-like feel” with glass and greenery, where guests can relax and recharge.  Courtesy Designova Creative

One head-turning feature are arching elements at the stern. They’re intended to look like a physical backbone of the yacht, soaring down from the top of the superstructure to the water. They could also double as great waterslides for kids.

Weiss also envisages plenty of power for the yacht, though in keeping with the green theme, it would be a hybrid diesel-electric set-up with biofuel generators and solar panels charging big battery banks. And Crescere would be fast, rushing from one tropical island to the next at 40 mph.

“The fun part of working on the concept has been the conversations we’ve had with companies that can develop these complex new technologies,” says Weiss. “Like creating the pool glass sides, the glass living walls, and propulsion systems.”

The yacht’s stern has a feature that resembles a backbone that runs from the flybridge to the water.  Courtesy Designova Creative

Weiss even spoke to a company that could develop smart watering systems to manage the health of the plants on board. “That’s not something you do every day as a designer,” he says.

One additional challenge the designer is tackling: A car-carrying tender. It seems that the potential buyer has a much-loved collection of classic automobiles, six or seven of which he would take with him on the yacht. “We’re working on a military-style landing craft that can be deployed from the side of the hull, and be able to run-up onto a beach or boat ramp,” says Weiss. “You can do a lot of fun stuff when you have something that’s 433 feet long.”