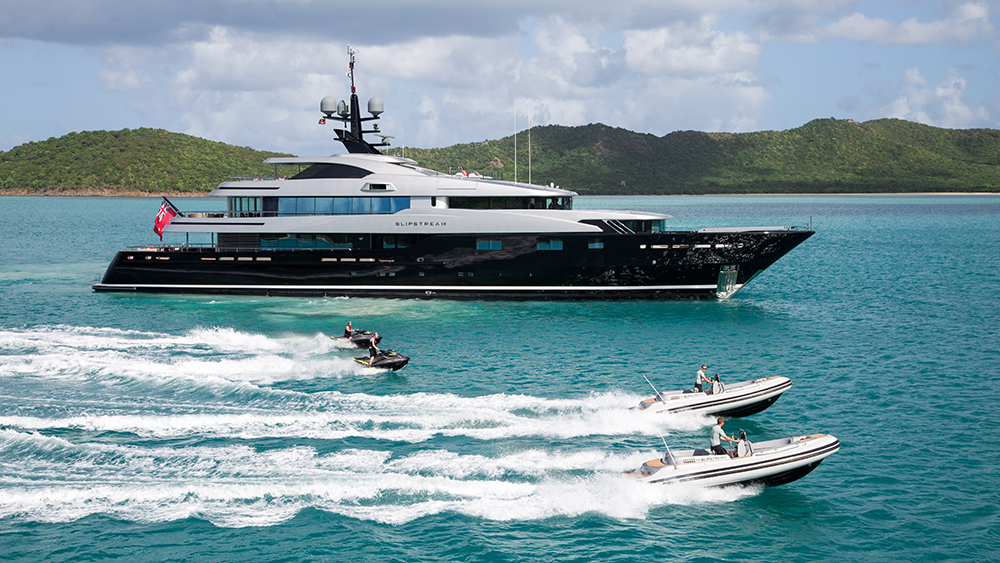 Need an antidote to the breakneck pace and numbing news cycles of modern life? Sailing north into some of the world’s most serene, remote frontiers is a uniquely soothing remedy. Here, five of the finest—and least-traveled—cruising grounds at the uppermost reaches of the globe.

One of the most remote itineraries in this group, cruising Greenland’s majestic icebergs and glacier-covered plateaus with alpine troughs and tundra wildflowers presents a landscape that hasn’t changed for centuries. Areas such as Ilulissat offer kayaking near the icecap, while more kayak exploration awaits at Eternity Fjord, with its towering mountains and hanging glaciers. Refitted last year, Nansen Explorer is the only yacht in this group that sells individual cabins—seven cabins for up to 12 guests—with simple Scandinavian style and luxe features including floor-to-ceiling windows, two chefs and large staterooms. From $16,500 per person via EYOS Expeditions.

This 113-foot classic yacht will moor in Desolation Sound, with its dramatic mountain backdrop, as well as explore other pristine areas of British Columbia. Composed of calm inlets, sweeping bays and scattered islands, Canada’s west coast is wilderness at its most scenically beautiful, and the yacht’s restored log-cabin-style interior with nautical accents complements the Pacific Northwest terrain. Off-yacht adventures include kayaking secluded lagoons and perhaps even paddling with orcas. You can also step ashore to harvest clams and oysters. The yacht is stocked with toys including an inflatable trampoline and slide, plus a six-person hot tub. From around $137,480 per week via Pelorus.

Calling all whisky connoisseurs: A summer of fun sailing Scotland’s distillery-filled coastline is on the cards aboard 197-foot yacht Slipstream. The exotic, Winch-designed interior includes hand-carved totem poles, while its karaoke facilities, smoke blower and bubble machine are sure to be put to good use after the whisky tastings. The boat will also travel in Norway, between Stavanger and Bergen, for those who want to enjoy the fjords and midnight sun. Slipstream features an owner’s suite with a private observation lounge and direct access to the foredeck as well as a sky lounge that transforms into a cinema. From around $373,000 (increasing to about $404,257 per week during summer high season) via Burgess.

Built by Feadship and geared for wellness charters, the 188-foot Halo is ready to transport guests to the Norwegian fjords for a summer of pampering. When cruising into Andenes, the northernmost settlement on the island of Andøya, the yacht’s sundeck pool is the best place to spot sea eagles, seals, minke whales and humpbacks. A specialized crew includes two personal trainers, a massage therapist and a yoga instructor. The ultimate onboard experience? Working out on the foredeck with the fjords as a backdrop. Halo’s six-cabin layout presents an owner’s suite and four convertible king cabins on the main deck, with a sizable VIP accommodation on the bridge deck. From around $498,000 per week via Edmiston.

If you’ve ever dreamt of walking in the snowshoes of the most famous polar explorers, Ponant’s Le Commandant Charcot offers that opportunity in July, with a bucket-list expedition to the magnetic North Pole. The trip includes sailing to the heart of the ice floe, then actually cutting through the pack ice when it’s thinnest in order to reach the destination. Beyond experiencing glaciers, mountains, constantly shifting ice packs, polar bears and reindeer, other off-ship pursuits include sea kayaking, snowshoeing and hiking. Meanwhile, life on board the 123-suite vessel presents little hardship, with two restaurants, a spa to explore and even the opportunity to assist in scientific research carried out on the vessel. From $40,730 per person via Ponant.