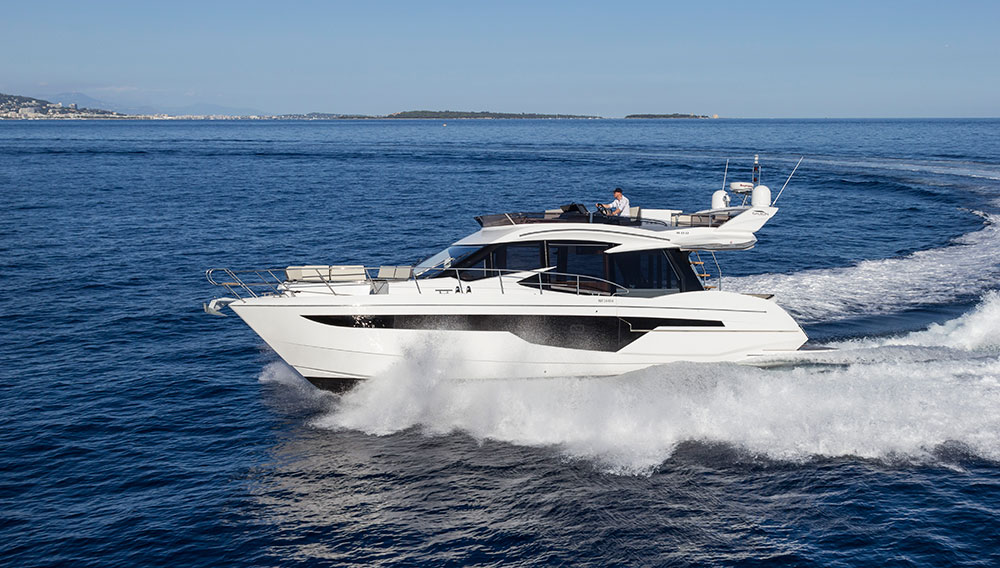 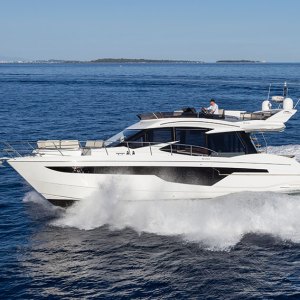 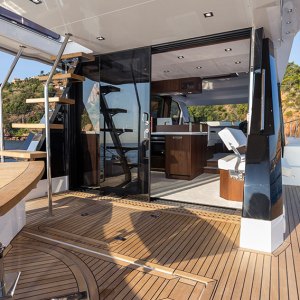 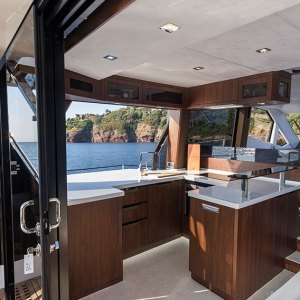 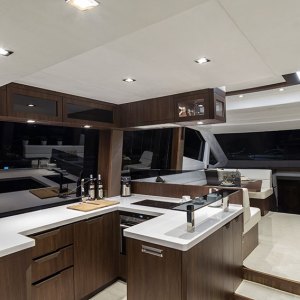 The new Galeon 500 Fly yacht is the quick-change artist of production motor yachts. At speed, the Galeon looks like any normal flybridge—sleek, aggressive, and sexy. But at anchor, the glass windows slide into the hull sides, the bulwarks fold down, and the 50-foot Fly looks more like a 125-foot superyacht. Its designer Tony Castro—whose superyacht designs have won many awards over the past two decades—has been steadily including superyacht features as he creates new Galeon models. But the 500 Fly is the most transformative design, perhaps ever, for a relatively small production motor yacht.

Castro told RobbReport.com that opening the hull sides was a logical progression to make the interior engage with the rear cockpit. While other designers focus on opening the main salon to the great outdoors through rear sliding doors, Castro thought it would be a better idea to roll open large side windows and lower the bulwarks into side platforms.

The innovative design means that, on the port side, a terrace with a table and two bar stools is suddenly connected to the inner galley, forming a breakfast nook or cocktail bar in the evening. On the opposite side, the fold-out terrace features a lounge that sits only a few feet above the water.

Getting the jigsaw design right was an engineering feat that both Castro’s England-based studio and Gdansk-based Galeon worked hard to complete. It involved sliding the 6-foot sections of saloon windows into the hull, then lowering the even longer, heavier bulwarks, without compromising structural integrity. The windows move manually, while the bulwarks tilt out electrically. Castro says his studio came up with the fold-out terrace idea just over a decade ago for a superyacht, but he applied the design to the Galeon to see how it could open up big possibilities on smaller yachts. “The 500 Fly shows just how far we can go to redefine the design terms of production boats,” Castro says.

When buttoned up, however, the 500 Fly looks like any trendy new Euro motor yacht, sporting several features that are new to its class. The aft cockpit lounge sits on a semicircular track that allows it to take in 360-degree views, so it can either face forward toward the saloon when the boat is running, or it can swing entirely around to create a social area overlooking the water. Castro’s studio also worked some magic on the foredeck, creating an arrangement where large sunbeds transform into facing lounges. It’s no slow boat to China, either. The company says it will reach a top end of 30 knots with 670-hp Volvo D9s. You’ll never see a superyacht hit that speed. (galeonyachts.pl)