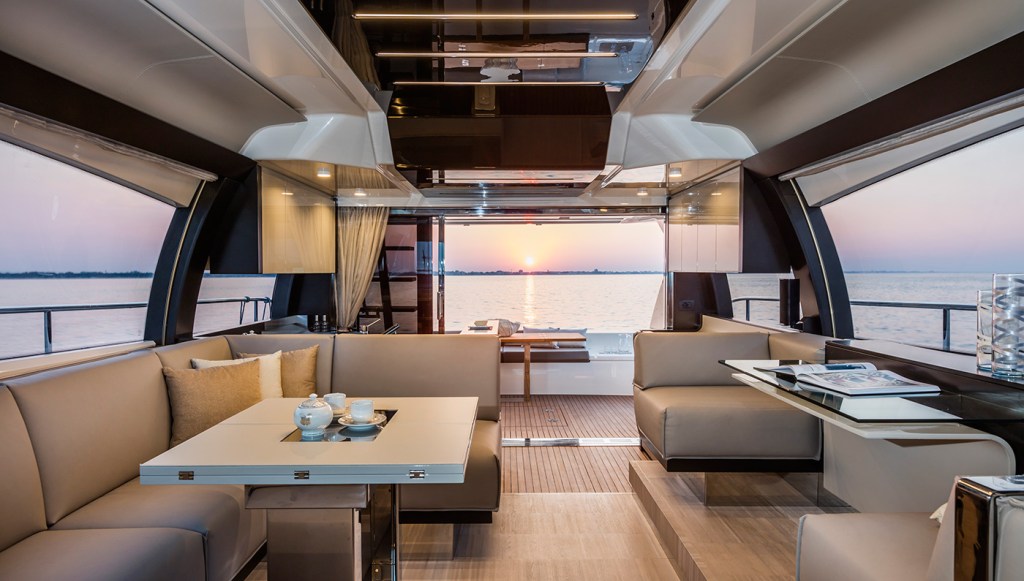 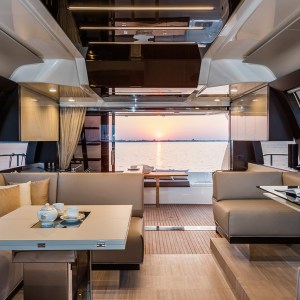 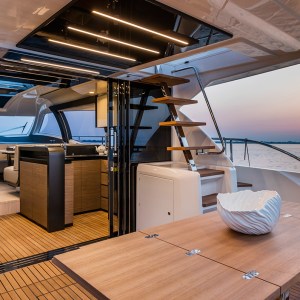 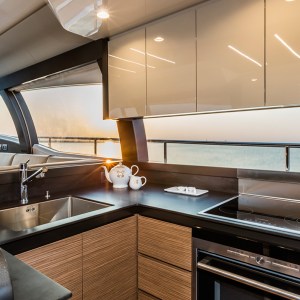 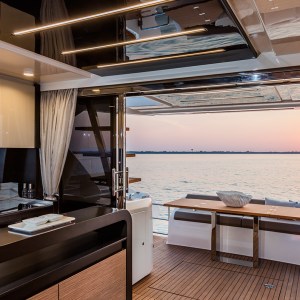 The 55-foot Ferretti Yachts 550 proves that a brand can instill big-yacht features and smart design into even smaller models. The Italian builder managed to retain its distinctive Ferretti look on the new 550, while maximizing its amenities.

The new 550 was designed by the Ferretti Group Engineering Department, with styling and interior design handled by Studio Zuccon International Project. The goal was to create a 55-footer that feels many feet larger.

Throughout the yacht it is apparent that Ferretti and Zuccon achieved their goal. The sense of open space starts at the flybridge, which is placed farther back on the superstructure to give the profile a faster, coupe-like appearance—a characteristic of all the most recent models in the Ferretti fleet. The layout of the flybridge is well arranged, too, boasting a large sun pad forward, a helm station, and a wet bar in the midsection, plus an expansive L-shaped lounge aft. The top deck, without an overhead radar arch, feels much larger and looks sportier than a traditional flybridge motor yacht. Most of the 550’s competitors today feature flybridges that extend across the superstructure, resulting in a boxier, more cumbersome look.

On the bow a second social area, complete with opposite-facing lounges and a large sunbed, is another big-boat feature now more commonly found on midsize motor yachts. But, on the 550, the long forefoot affords a more integral look with the profile. And yet another social area, an outdoor space in the cockpit, allows for alfresco dining.

The large glass door in the cockpit is divided into three parts that may slide back to the flybridge stairs for access to the main saloon, which has no bulkheads to limit the field of vision. The 360-degree windows and a sunroof provide natural lighting. The unobstructed views and abundance of light lend the yacht a more spacious feeling than a typical 55-footer.

Belowdecks, the big-boat feel continues with a full-beam master suite appointed with a window-side dining table, a walk-in closet, and a full walk-in shower with mosaic tiling in the separate head. In one of three layouts available for the Ferretti 550, a large VIP stateroom forward and a double-bed suite are both equipped with en suite bathrooms. A second layout offers one head to be shared between the VIP and guests, and gains a vanity desk for the VIP suite.

A third layout—the renowned “Tai He Ban,” a design especially aimed at the Asian-Pacific markets—moves the galley belowdecks; several cabins may be replaced with open spaces for entertainment and games, like karaoke, or for business meetings. The 550 also offers an optional hard top over the flybridge.

Later this year, Ferretti plans to launch an even smaller yacht, the 450. The new entry-level yacht will launch next summer, followed by its world debut at the Cannes Yachting Festival. (ferretti-yachts.com)