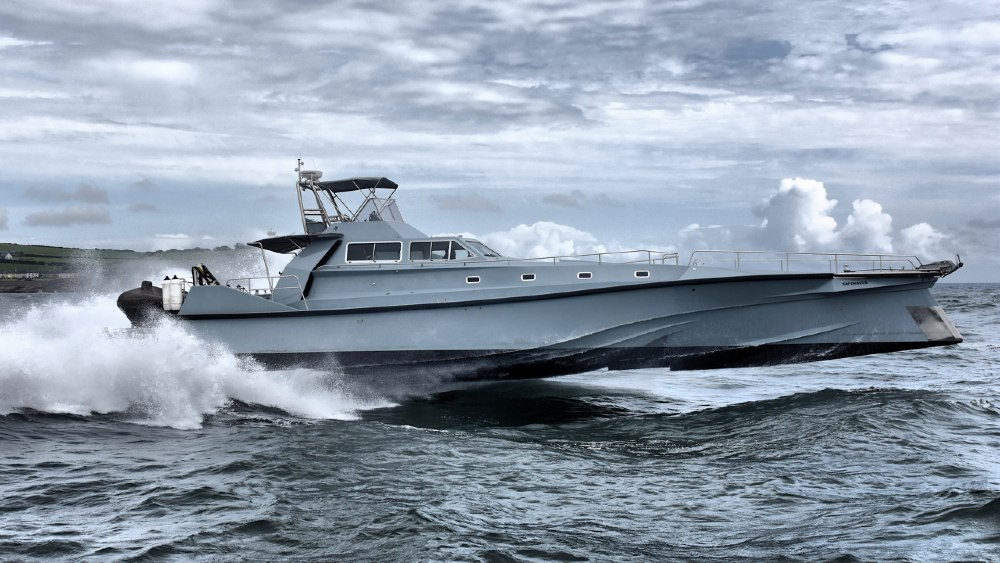 It’s a boater’s worst nightmare. Howling 40-knot winds churning-up near-vertical 20-feet walls of frothing sea. Add to the maelstrom a vicious rip-tide, horizontal rain and menacing coal-black skies. Definitely not a good day for a cocktail cruise around the bay.

This was the punishing sea-trial inflicted on the newly christened Enmer, a no-nonsense 75-foot XSV20 explorer yacht, before being delivered to her new owner, French billionaire and passionate yachtsman Jack Setton.

Even the delivery was extreme. Before Monsieur Setton was handed the keys, Enmer went on a 2,500-mile, high-speed blast from builder Safehaven Marine’s yard in Cork, Ireland, to her new slip in ritzy Porto Cervo, Sardinia.

With a hull more common on offshore pilot boats than motor yachts, the XSV20 blasts through big waves rather than stumbling over them.  Courtesy Edmiston Yachts

Now, after more than a year of cruising the Med and Caribbean, Setton has decided to sell the military-grade Enmer – the name is French for “At Sea,” with an asking price of about $2.35 million. “It’s time for me to lose a lot of money, which I seem to do regularly with my boats, and let someone else enjoy her,” Setton told Robb Report.

Setton found it in the XSV20, with an innovative, wave-piercing hull, thundering 51-mph top speed and go-anywhere capability. “I’ve always loved boats that look rugged on the outside but are comfortable inside—boats with no frills that I know will get the job done,” he says.

The pilothouse is no-nonsense, with shock-absorbing seats and an inch-thick ballistics-glass windshield that is shatterproof.  Courtesy Edmiston

The serial yacht owner worked with Safehaven to fine-tune the design, installing twin 1,150-hp Cat C18s hooked-up to waterjets. For Setton, the goal was less complexity, easier maintenance and better low-speed maneuverability. Those factors were important since it would be primarily Setton and his girlfriend who would cruise on the boat.

What didn’t change was the XSV20’s unique hull design. It starts as a carbon fiber and Kevlar-reinforced mono hull with a knife-like, wave-piercing bow. This then flows back into a deep-V mid-section, then seamlessly transitions into twin, catamaran-style hulls. He used inch-thick ballistic glass for the forward windows to provide extra protection for the wheelhouse.

Not a fan of boats that careen over waves, Setton designed a unique ballasting system. “It keeps the nose down, so the boat acts like a submarine, punching straight through the waves,” he says. “We experienced some bad conditions in the Med and it took everything incredibly well.”

The wave-piercing hull is a unique design for a motoryacht but serves the owner’s passion for going mano-a-mano with big ocean swells.  Courtesy Edmiston

Though fast, Setton prefers to run at slower speeds. “Yes, she’ll get up to 51 mph but she’s a lot happier at 40,” he says. Come down to 30 mph and she’ll cover over 600 nautical miles without refueling. You have a lot of performance and range.”

The interior was designed to be simple, yet comfortable enough for long cruises. Below decks, there’s a master suite, a guest cabin and crew quarters in the bow. When the seas turn gnarly, the pilothouse features four SHOXS commercial-grade, shock-absorbing helm and passenger seats for safety and comfort.

Setton thinks the next owner will either be someone looking for a boat to turn heads cruising into St. Tropez or an experienced sailor looking for adventures. “I need someone who is as passionate about the boat as I am,” he says. “I admit that I have turned down buyers in the past who didn’t understand what my boats were about. I’m optimistic I’ll find the right person.”

At rest, Enmer has a handsome profile, along with an exposed upper helm and open rear deck for relaxing in the sunshine.  Courtesy Edmiston

Enmer, currently moored in the South of France, is listed with Edmiston and judel/vrolijk & co. Here’s a video of the yacht in action.