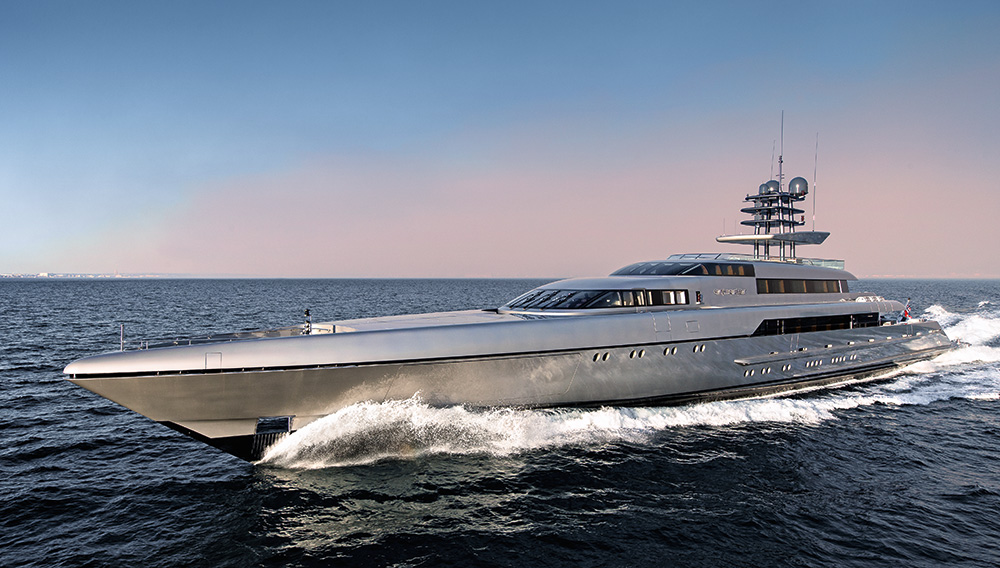 The 252-foot Silveryachts superyacht Silver Fast recently completed its maiden voyage, traveling 3,200 nautical miles from Perth to Sri Lanka. The yacht, built by the Australian shipyard Silveryachts, achieved an average cruise speed of 17 knots during the journey, though in ideal conditions the vessel can reach speeds as fast as 27 knots under power of its twin MTU 16V 4000 M90 engines. The shipyard says that this makes Silver Fast the fastest aluminum yacht of its size utilizing conventional propulsion. As further illustrated by its recent crossing from Australia to Europe in 21 days, Silver Fast is built for long-distant hauls. The shipyard says that the yacht has a range of 6,000 nautical miles when cruising at 14 knots.

With the yacht’s considerable size and sleek, svelte profile, the silver-hulled beauty was certainly one of the most noteworthy launches at the 2015 Monaco Yacht Show. The Monaco-based naval architect and designer Espen Øino gave the yacht an almost stealth look, but one with a magnificent sense of elegance and scale.

Silver Fast’s interior, from the drawing board of the German design firm Vain Interiors, is also elegant and expansive. The owner’s suite includes a private lounge and large deck. Three VIP staterooms are on the main deck, while one double and three more twin cabins are on the lower deck. Beautiful anigre paneling and other wood detailing define many of the staterooms. The yacht is designed for 18 guests, with additional sleeping quarters for 18 crew.

One of the exterior highlights is the sundeck, which features an outdoor cinema and a glass-front, eight-person spa. The large beach club at the transom includes plenty of room for deck chairs and for launching water toys; an interior with a full spa area (a sauna, steam room, gym, and massage room); and a beauty salon. The aft deck also has a “winter garden”—a wraparound glass enclosure that allows the owner and up to 20 guests to dine outdoors, but in a space that can be heated or air-conditioned.

The yacht’s two 24-foot custom tenders, stored in a forward section of the hull with lifting gullwings, are designed for all-weather running. The bow helipad is suitable for helicopters that extend to the Augusta 109 or Airbus EC135. According to its sale broker, Burgess, the asking price for Silver Fast is about $85 million. (silveryachts.com; for sale through Burgess, burgessyachts.com)