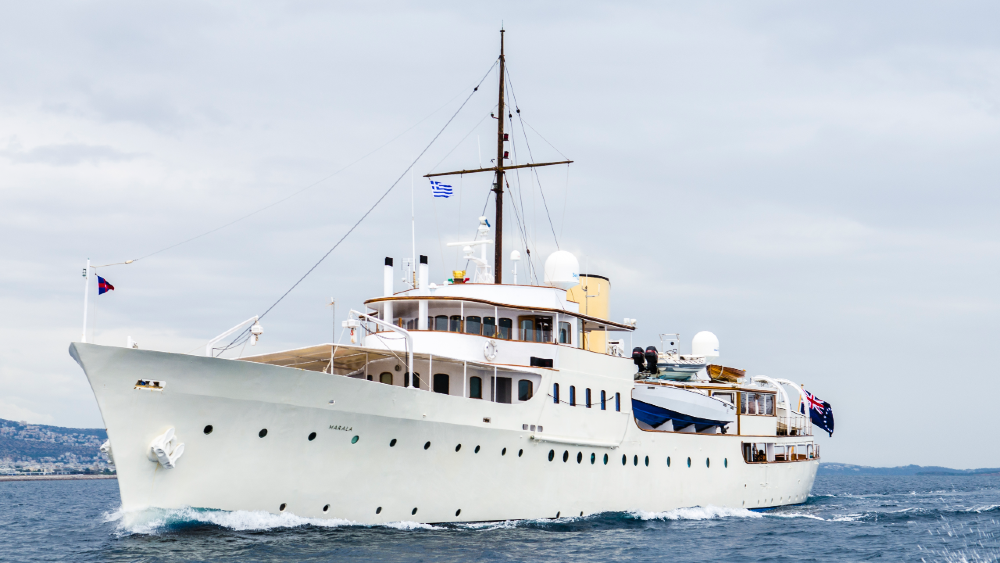 Interior designer Nathan Hutchins is more used to renovating historical buildings than classic yachts. But when the owners of the 1930s yacht Marala commissioned him to undertake the boat’s extensive renovation, he couldn’t refuse.

Co-owner of British studio Muza Labs, Hutchins’s experience of heritage interiors ranges from Spanish UNESCO world heritage sites to historic buildings in London. Hutchins was first introduced to the classic yacht’s owners 20 years ago when he completed the interior on their Dutch river barge. Two decades on, Marala is his first-ever yacht.

“I recently worked on two canal barges in France and I’ve just completed a sleeper train in South America,” Hutchins told Robb Report. “I think a lot of elements of pure design are very relatable, but technically it’s been a jump. For me, it’s about finding the spirit of the place and in this case, the yacht. How the owners want to enjoy it.”

The current owners, who purchased the yacht in the summer of 2018, are only the fifth in Marala’s 88-year history. But the modifications made over time have “interrupted the elegance” of Marala’s original lines, says Hutchins. The owners wanted the designer to capture the spirit of the 1930s to regain its original essence.

The authenticity of the restoration, which is being carried out at Pendennis shipyard in Falmouth, UK, was aided by Hutchins’ discovery of hand drawings on the ship’s original blueprints located in the U.K.’s National Maritime Museum’s archives.

“We’ve been able to reference and reintroduce design elements using the original concepts, such as beautiful bookcases in the aft saloon,” says Hutchinson. “We discovered two original beds that had been cobbled back together that had featured softly curved corners and drawer fronts.”

Designer Hutchins had to be careful to keep the original charm and character, but also modernized the decor. During the restoration, much of the old woodwork was uncovered under old layers.  Courtesy Pendennis

Designer Hutchins had to be careful to keep the original charm and character, but also modernize the decor. During the restoration, much of the old woodwork uncovered under old layers.

Marala was built in 1931, but its would-be owner unfortunately died a month before the yacht’s delivery. This meant she was launched as number 388, the only Camper & Nicholson boat ever delivered without a name. Requisitioned by the Royal Navy in World War II, she served as HMS Evadne, successfully downing a German Heinkel III aircraft using the anti-aircraft guns mounted on her decks. Later, in the Strait of Gibraltar, she used depth charges to disable and sink a U-boat.

“When the vessel was requisitioned for war a lot of the original furniture was removed to make the boat more utilitarian,” says Hutchins. “Much of it wasn’t put back with the most love and care.” The designer said that stripping the yacht back to her bare bones has revealed original details, such as bedside tables, joinery, and a Douglas fir floor, complete with scuff marks and staple holes. “We realized straight away that we needed to keep the floor,” says Hutchins, who has complemented the existing woodwork with the introduction of American black walnut.

In 1962, Marala was bought by Hungarian businessman Robert de Balkany, who decorated the interior in a bold Savoir blue in honor of his wife Princess Maria Gabriella of the House of Savoy. He named the boat after his first two daughters, Marina and Alexandra. In her heyday Marala entertained the world’s elite, including Frank Sinatra and Salvador Dali.

Marala‘s long, elegant profile was restored long after it served as a World War II warship, with two or three anti-aircraft guns on its bow.  Courtesy Pendennis

In a nod to the yacht’s history, Savoir-blue will run throughout the renovated exterior, paired with anthracite and white. Two custom tenders will have the new exterior palette. Marala’s 1940s systems have been upgraded and integrated into the authentic design.

“A lot of this boat hasn’t been seen for decades, so there were some items that needed immediate replacement,” Nick Kearton, project manager at Pendennis, told Robb Report. “A 90-year-old vessel means you’ll find things you might not want to. But the riveted steel that has survived is in very good condition, and we were able to clean it up and preserve it.”

Other sections were modernized for more practical use. Overhangs, doorways and the fashion plates outside of the owner’s suite have been reduced. The original timber decks have been fitted with steel separation plates to protect the interior. “It’s taken about 100,000 hours of steelwork fabrication alone,” says Kearton.

The yacht’s ‘Great Gatsby’ design is matched with original metalwork like the plates along the hull side.  Courtesy Pendennis

For Hutchins, one of the biggest challenges was discovering Marala’s hull was a slightly different shape than he had originally conceived. That required a redesign while in the Pendennis dry dock. “Nothing is black and white on a boat like this, and sometimes surprises are wonderful,” says Hutchins. “You pull off a panel and you find a carpenter in 1931 left signed his name in chalk. So, some of the revelations have been really interesting and reveal the history of the boat.”

Marala is scheduled for completion and delivery this November.