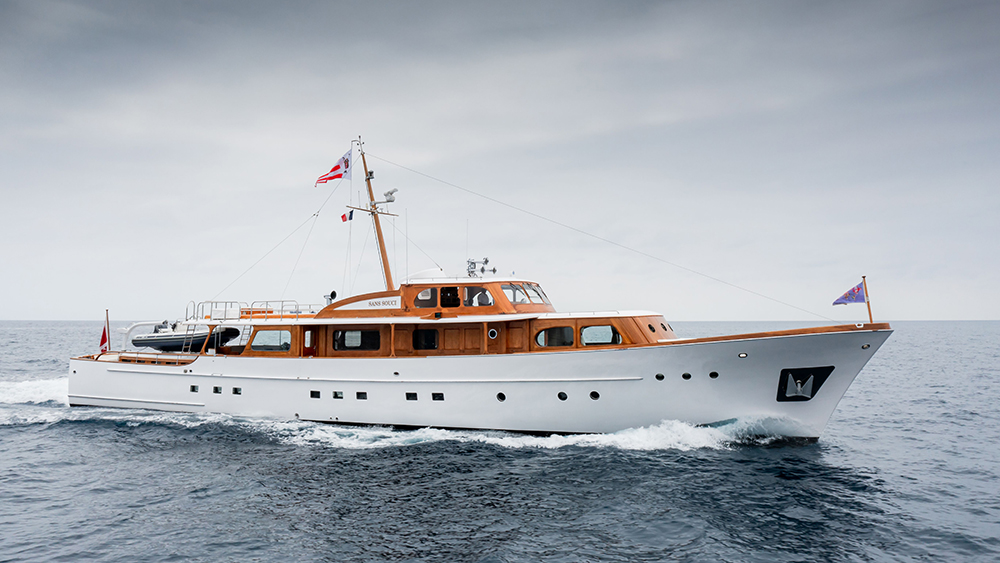 The only thing better than a gorgeous antique yacht from the ‘50s is one that’s been meticulously restored.

Enter Abeking & Rasmussen’s Sans Souci. The timeless 110-footer, which Edmiston has just listed for $5.6 million (€5.2 million), underwent a multimillion-dollar refit in the late 2000s and is presented in immaculate condition.

The vessel was designed by German naval architect Geerd N. Hendel and launched by Abeking & Rasmussen in 1955 under the name Verdesein. Showcasing the finest German engineering, the vessel was strong and light from the get-go, with double-planked teak on oak frames.

In 2009, De Carlo began a major rebuild that would span several years. The Italian outfit, which specializes in wooden construction, updated both the interior and exterior while keeping plenty of the original character. Today, Sans Souci combines classic lines and period style with modern-day power and amenities.

One highlight is the yacht’s unique 1920s décor. Edmiston says the owner scoured Europe for the perfect furniture, fittings and objects d’art to create a cohesive interior in keeping with the era. As for accommodation, the lower deck is equipped with one VIP cabin, a double cabin and a twin, while the owner’s suite is located forward on the main deck. Of course, all rooms come with ensuites and the owner’s bathroom is clad in marble. Elsewhere, there are four cabins for the crew.

Outside, meanwhile, there are plenty of alfresco lounging and dining spaces across the two decks. The flybridge, for example, offers plush seating for sunning and panoramic views of the ocean.

The engine room, which has been upgraded to meet the standards of a modern superyacht, houses twin Caterpillar motors that allow the 1950s beauty to cruise at 12 knots or reach 14 knots at full tilt. She has also been equipped with the latest tech, including zero-speed stabilizers and satellite communications. In fact, Edmiston adds that with just a few tweaks the privately registered vessel could easily be made commercial.

“Now on the market for the first time in her current configuration, Sans Souci is waiting for a new owner with the vision and aesthetic sensibility to take on a unique and very special yacht,” the yard said in a statement. “Rather like a classic car, if correctly maintained, the vessel will hold her value for decades to come.”