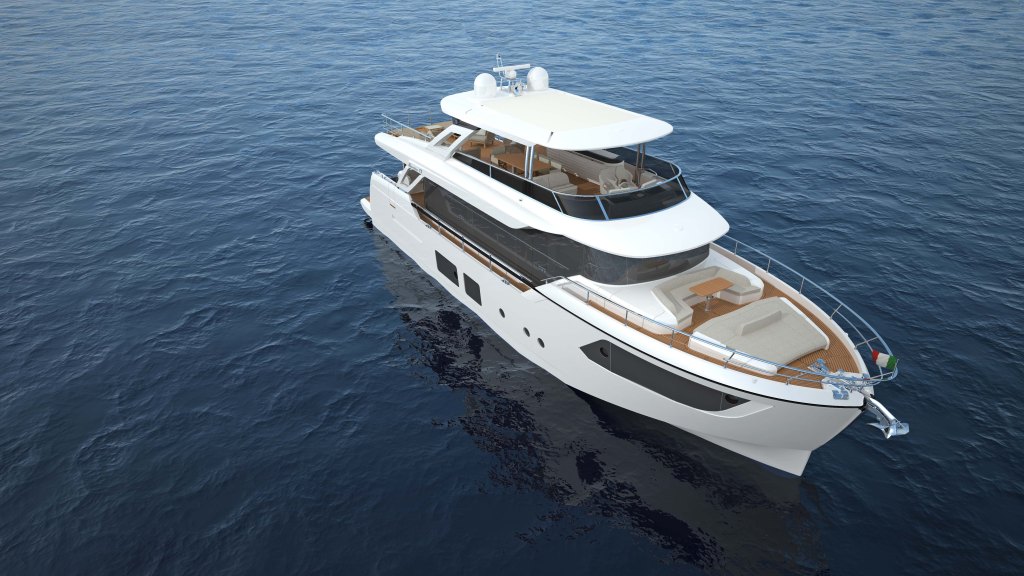 Absolute’s new Navetta 73 yacht, which will make its public debut at the Cannes Yachting Festival, will become the Italian builder’s flagship. The Podenzano-based yard is a relatively new name to yachting, but the Gobbi family founders have a long history in the Italian boating world. It shows in the Navetta 73, which has a contemporary profile and the interior space of yachts a good 10 feet longer.

Navettas are traditionally large, live-aboard yachts designed to cover long distances under fairly utilitarian living conditions. Most navettas are also relatively slow. The new Absolute turns that stereotype on its head. With a sharp, aggressive-looking forefoot and large swaths of windows, the 73 is powered by two 1,000 hp Volvo diesel engines with IPS pods. The Volvos not only deliver a top speed of 22 knots, but the pod system let Absolute design a larger, more creative interior. The four-stateroom configuration includes a full-beam master in the bow, two more VIP suites, and a twin. The larger of the VIP suites is also full beam, with windows to the sea, a bathroom with his-and-her sinks, and walk-in closet. Size-wise, it’s not much smaller than the master. The third VIP is smaller but generous in size, with large windows behind the large bed. At the stern are the captain’s quarters.

The main deck has a large saloon aft, formal dining table, and galley forward, just behind the pilothouse. The 73 does have a serious pilothouse and not just a helm station. The enclosed galley provides privacy for the guests in the saloon, chef, and captain. The table in the exterior cockpit invites alfresco dining, while the four-person sunbed and large lounger dominate the bow. The flybridge is probably one of the largest in the 70-foot-plus class, using every inch for owners and guests. Four zones include two giant sunbeds aft, with a shower nearby, a center lounge area, and dining table under the hardtop, directly across from a long wet bar and outdoor galley. The hardtop is positioned amidships, an unusual placement, which makes sense since the sunbeds forward are out of the shade. It’s a clever design, especially with a set of stairs dropping down from the upper helm right into the pilothouse. A second set at the rear connects the bridge to the aft cockpit.

The Navetta 73 should be a milestone for Absolute when it debuts in Cannes in September. It proves a relatively new player can match the quality and design of more established brands with a bit of chutzpah and a lot of forward thinking.