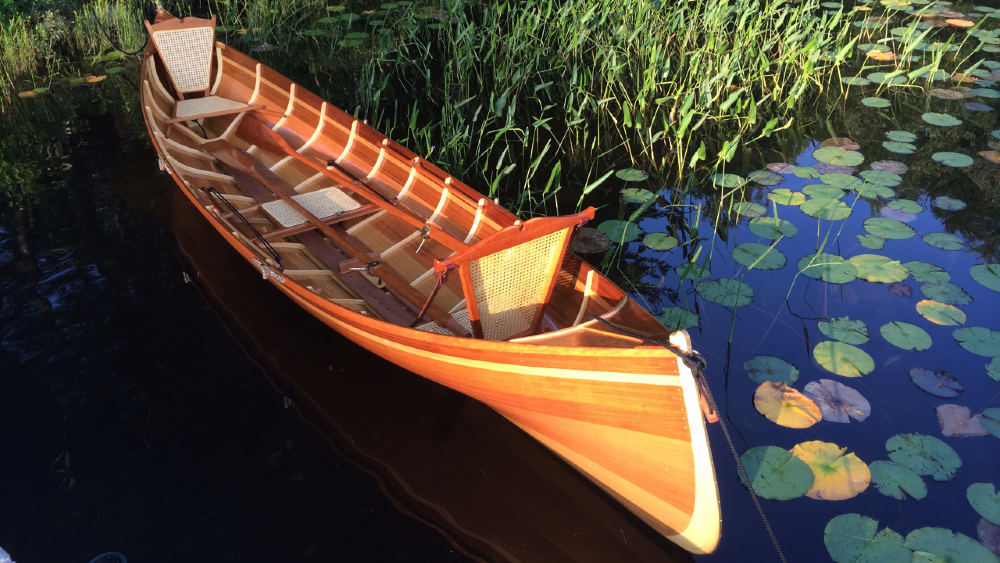 Just a half-century ago, wood was the main component for boatbuilding. As fiberglass became the material of choice, wooden boats turned into a small, niche for aficionados who love the look and feel of wood. These days, the wooden boatbuilding segment is limited to a handful of artisan builders who understand the product is more about craft than profit margins. They see their boats—the result of hundreds of hours of bending, gluing, sanding and varnishing—more like floating sculptures than production-line commodities.

Two boatbuilding brothers continue to take the road less traveled by offering a line of custom wood boats, built in the same shape as their standard Kevlar composite hulls. “Building composite boats provides instant gratification,” says Justin Martin who, with brother Ian, owns Adirondack Guide Boats in Ferrisburgh, Vermont. Depending on demand, the workshop near the shores of Lake Champlain turns out six to 12 custom wooden boats each year, while building hundreds of guide boats with Kevlar hulls.

Martin got into boatbuilding about 25 years ago with Mad River Canoes. “I was right out of high school,” he says. “I started as an assembler and was soon running the department.” His brother, Ian, also joined the company. When Mad River moved production to North Carolina in 2001, the brothers joined Adirondack Guide Boats, a much smaller builder that specialized in wooden boats.

The guide boat was originally designed to be lightweight transport for hunters or fishermen in remote Adirondack lakes and rivers.  Adirondack Guide Boats

“The former owners, Steve Kaulback and Dave Rosen, hired Ian and me because of our skills with composites,” says Martin. “They wanted to move beyond wooden boats.” Production increased from about 50 boats to 330 each year.

The Martins understood that wood was the soul of the company and wanted to expand the unique design that Adirondack made for the market. “We told them we wanted to build one and they handed us a manual and said go for it,” he says. The brothers’ first 15-foot guide boat took 300 hours to build. Shaping the wood in steam ovens, gluing dozens of pieces, and then spending hundreds of hours sanding was a different process than popping Kevlar boats from molds.

But the Martins knew they had something special with their guide boats, which are customized for each client. Since their first one, the brothers have built dozens more—including one for Martha Stewart. Each includes a signature piece that means something to each client. It might be a brass name plate fashioned in memory of a loved one or repurposed wood that provides an emotional connection to a previous boat. One owner milled a purple heartwood tree from his own property, which the Martins used for decks on a Kevlar guide boat. “He wanted a custom boat as a gift for his wife,” says Martin. “That dark, purple wood was beautiful.”

Beyond the time and craft that goes into the construction, the guide boat is unique among rowing craft. Designed in the late 1800s for hunting guides to transport wealthy, city-dweller clients around remote lakes of the Adirondacks, the guide boat rides low to the water for stability, with eight-foot-long oars for speed. The boats were designed to carry two people, hunting dogs, and with their wide center, the big game or fish that clients caught. The boats require much less rowing effort than a canoe, and they are a lot more stable.

Nearly a century and a half later, the Martins are still using the same design. But they have moved from building utilitarian craft to creating heirlooms. Owners can either buy the boats in kits and finish them at home, or Adirondack will build to order. Each boat takes 400 hours, compared to 40 hours for a Kevlar boat, because the wood requires a lot more time and care.

The process includes steaming and curving spruce ribs and steaming strips of western cedar for the exterior. The cedar is light and available in single pieces so the boat looks more uniform. Depending on the look the client wants, the interior is made from pine, ash or mahogany. “The hard part of this process is making sure the client knows what the final product looks like,” says Martin. “We work hard with different woods to make sure they get what they want.”

Crafting a wooden boat is much more painstaking and time-consuming than fiberglass boat building.

The 8-foot-long cherrywood oars, fashioned in house, provide the speed, while the caned seats and brass fittings give the boat its classic good looks. Instead of hunting, most guide boats are connected to waterfront cottages. “Parents like the stability of the boat and since you’re seated down low, it provides safety,” says Martin.

Other owners are using their boats as rowing skiffs because of the design’s speed. “One guy had us build in a flagpole so he could fly his college flag,” says Martin.

A few never plan to use the boat, but instead suspend them from the ceilings of their living rooms as wooden sculptures. “One owner called us 15 years later to see if we wanted to purchase the boat again because he was moving,” says Martin. “He’d had it in his living room the whole time, and it was in the same shape as when we’d built it.”

While Adirondack Guide Boats is experiencing record demand for their Kevlar guide boats, they expect their wooden boats to continue to attract buyers. “The composite boats provide instant gratification,” says Martin. “But the wooden boats take so many hours of labor that you get attached to each project. The goal is to build something unique and enjoy doing it at the same time.”