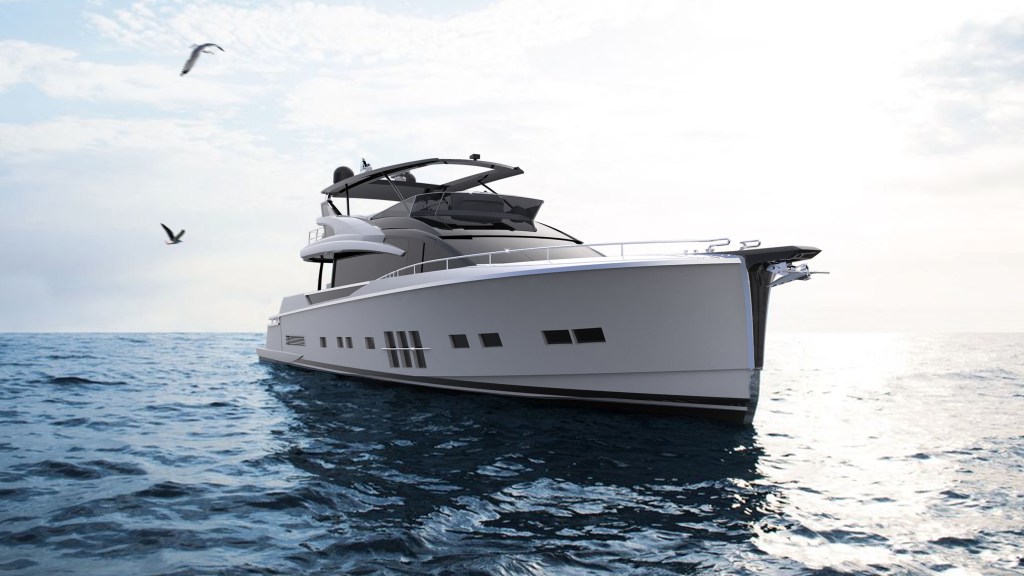 How do you top a superlative when you’re naming a new product? Does Best become the Best-est? Or Excellent turns into Most Excellent?

In the case of the 76-foot Adler Suprema, the Swiss yacht builder decided to add an X at the end for its newest model. The Adler Suprema X, however, represents more than just a few cosmetic changes. At 84 feet overall, the Nuvolari-Lenard design will be more than seven feet longer, and most of that extra space will be devoted to the interior. It will also have four staterooms, including a full-beam owner’s suite, forward VIP suite, and two other cabins. The yacht includes a generously sized saloon that has floor-to-ceiling windows, a large galley, a separate helm area, and even a Jacuzzi on the foredeck.

The Suprema 76 was one of the most interesting launches on last year’s yacht-show circuit, a futuristic exterior built of carbon fiber and Kevlar to minimize weight while keeping it seaworthy in the ocean. It also had one of the coolest, most user-friendly touchscreen helm consoles I have seen on a yacht. The attention to detail was impressive, including standout items like joystick controls on the helm seats, an infrared strip to heat the cockpit, showers on the flybridge and swim platform, Minotti leathers and Armani fabrics in the saloon and stateroom, and fobs for entering the yacht. All systems are also controlled by iPad. The boat included a thoughtful blend of high tech and luxury.

The Suprema X, which should be launched in 2019, has the same number of details, and offers three choices on the top deck. They include a hardtop with sun window or open T-top over the flybridge deck, or an enclosed skylounge. The T-Top (with retractable canvas for shade) and hardtop options will provide maximum exposure to wind and sun, while the enclosed skylounge allows for a single helm station. That gives the owner the choice of losing the wheelhouse on the main deck and using that space for an extra-large saloon.

Adler has designed the Suprema series for yachties who want improved quality of life on board without having to upsize the yacht. Features like the 86-inch movie screen in the saloon, extended swim platform, or electrical sliding doors can make all the difference while cruising. Of course, the Suprema’s most noteworthy breakthrough is its Hybrid Marine System, co-developed by designers in the aviation, automotive, and marine industries. The HMS incorporates two Caterpillar C18 engines, 170kW battery banks, and two electric motors and generators (E-Units). In diesel mode, the 84-footer will have a highly respectable top end of 30 knots, while in full-electric, it cruises 10 knots. Electric also means no exhaust fumes, vibration, or noise. It’s almost like being in a comfortable sailing yacht. The Suprema X is now being assembled at the Cantiere Alto Adriatico shipyard near Trieste, Italy.