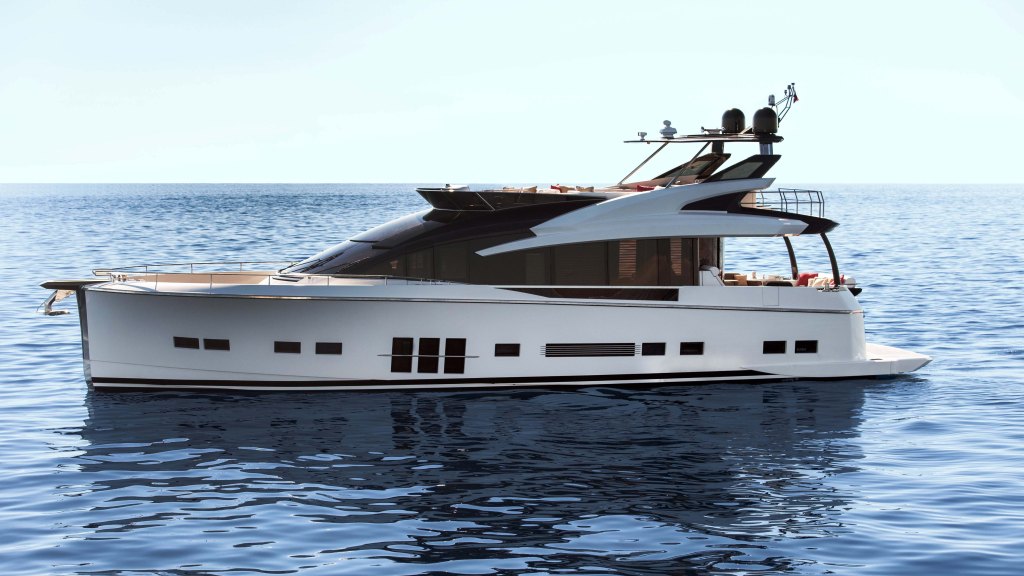 The Adler Suprema is built in Switzerland by owners who love yachting but believed that most modern motor yachts could be so much better. The 76-foot flybridge model, making its U.S. debut at the Fort Lauderdale International Boat Show, is a fresh take on yacht design, from macro items like a carbon-fiber hull and hybrid engines, all the way down to comforts like heated floors and chilled drink holders. It’s also the first yacht its size with transatlantic range.

Nuvolari Lenard, with many superyacht design awards to the firm’s credit, distilled the features of a much larger yacht into the 76-foot hull. The Suprema has a largest-in-class flybridge, along with floor-to-ceiling panels along the saloon that open to blur the lines between the interior and exterior. The open-plan layout also allows freedom of movement across the main deck. A day head on that deck is also a megayacht feature that makes a huge practical difference for quality of life.

The all-glass helm station, with six large touchscreen Boeing panels, allows the captain or owner to control most onboard functions, from air conditioning and lighting in different rooms of the yacht, to speed, trim, stabilizers, and many other features. The same systems can be controlled remotely by iPads as well. The helm station also has a high-tech privacy glass that lifts and lowers with a push of a button.

Plus, hybrid engines are an unheard-of feature for a yacht this size. Twin 1,150 hp Caterpillar diesels are mated with two 100 kW e-unit electric motors. Using just electric power drives the boat up to 11 knots, with minimal vibration and no emissions. The twin Cats, by contrast, give the Suprema a top end of 28 knots. Working together, the hybrid system delivers a range of 3,500 nautical miles, or the ability to cross the Atlantic.

The Suprema is also unusually detailed when it comes to creature comforts, with heated floors on the main deck and heated floors below, along with an infrared heating strip in the stern cockpit. There are also outside showers on the flybridge and swim platform. The Suprema has an onboard CCTV system, with normal video as well as infrared and underwater cameras for security.