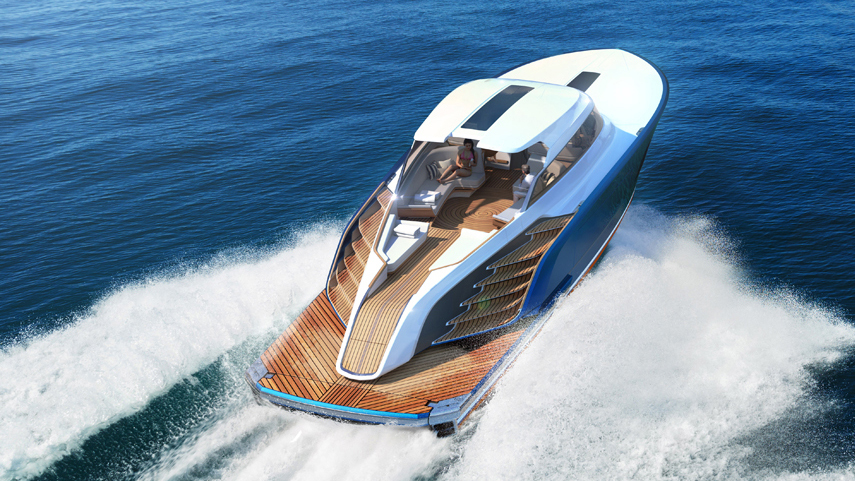 Following the launch of its SV12 in 2013, Aeroboat’s new S6 day boat concept made its debut in early June at the SuperYacht Gallery in London. The S6 sports a completely different look from its smaller 50-foot SV12 sistership, which was designed for performance via its Rolls-Royce V12 Merlin engine. The 65-foot S6, by contrast, looks like the largest day boat in its class. Its teardrop-shaped cockpit is an oasis for up to a dozen people on a day trip, while the interior has a large saloon, galley, and day head with shower, but no designated master suite.

U.K. design firm Claydon Reeves, the guiding force behind Aeroboat, uses “marvels of historic aviation” to shape its Aeroboat designs. The stairs on the S6, for instance, were inspired by WWII-era Supermarine Spitfire wings. The intent is to create a “truly British vision” for its boats, which range from 50 to 100-plus feet. Aeroboats are powered by Rolls-Royce engines, or in the case of the S6, a pair of sister-brand MTU’s latest 2000 M96 diesels are the engines of choice.

The S6’s teardrop cockpit is a clever design, allowing for exceptional visibility but also providing a sense of comfort as it narrows towards the rear. Twin helm and companion seats up front, long lounges amidships, and a large sunpad taking up the rear provide plenty of seating. The S6 has a cool teak table that lifts from the floor for alfresco dining, and then disappears once the meal is over. The touchscreen helm is similar to many all-glass aircraft dashes, while Aeroboat included a readout console on the frame of the windshield, so guests can see the speed, direction, and ETA without pestering the driver when the boat is running.

The S6’s “tail,” where the cockpit narrows, has a wide passerelle and pop-up rails to make it easy to get on and off the boat. The S6 also comes with high-tech Aerostairs, which is an extendable, full-beam swim platform that can be raised for boarding and lowered under the water to be used as a beach-club ladder. When the tail and Aerostairs are combined, access is easy in any docking situation.

There are several elegant features that distinguish the S6, like the “shoulder blade” line that connects the foredeck to the swim platform. This aesthetic touch accentuates the steps as they narrow toward the side passage.  The garage, which can accommodate tenders up 12 feet, is on the starboard side amidships, leaving the beach club at the stern wide open.

The day boat interior includes an owner’s lounge (which converts to sleeping quarters), with a full-size head and shower, and large galley. There is also a single cabin on the side for crew or guest use. If the owner wants a weekend cruiser, the S6 will sleep four. The MTU diesels are connected to jet-drives and joystick control system, as one might expect for such a classy, well-designed day boat. Top speed is 48 knots. Range at 40 knots is 400 nautical miles.