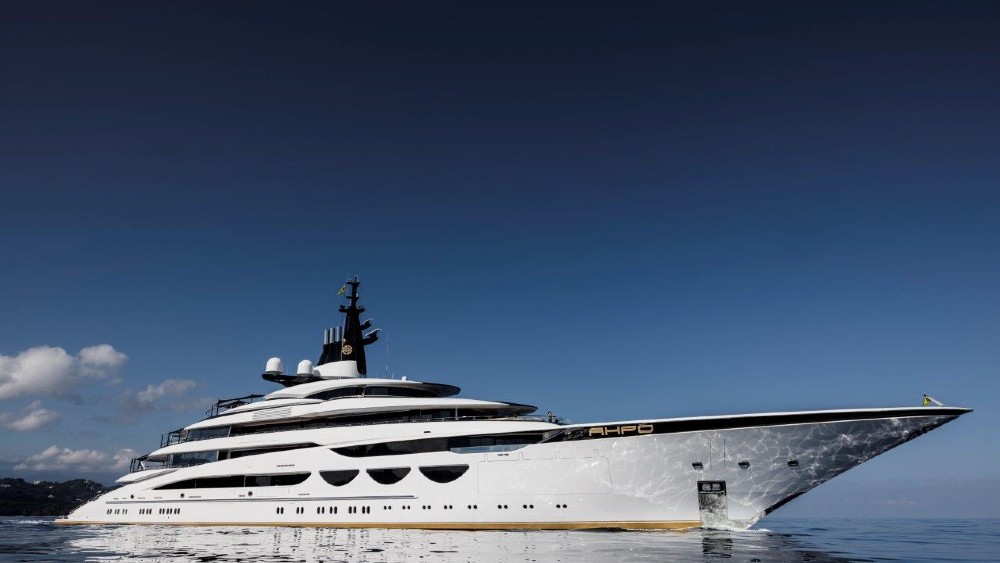 The fastest way to get the measure of any bespoke superyacht is to sneak a peek at the beach club. With a mosaic spa, bamboo-walled treatment rooms, hammam, sauna and drop-down sea terrace, 378-foot Ahpo brings a serious A game to its stern area. Pair that with four pools, a split owner’s suite and perhaps the most impressive gym on any recent yacht launch, and you’ll have a good idea why Lürssen’s new build will be one of the most popular boats for charter this summer. Of course, the owners will be using her, too.

Ahpo—meaning grandmother in Chinese—was built for a large family that knew exactly what they wanted. Blood, sweat and tears went into the family’s previous boat, the 288-foot Quattroelle, only for them to sell it just a few months after its 2012 delivery. This time, Ahpo would be for keeps.

The owner engaged the same team as Quattroelle: Nuvolari-Lenard for the interior and exterior design, Lürssen for the build, with project management by Moran Yachting. The family’s personality oozes throughout with Asian details that catch the eye. Soft pastel pinks and sage greens meet bursts of gold and white marble. Silk wallpaper, hand embroidery and elaborate inlays depicting flying flamingos, gingko leaves and red maple trees with bluebirds set a nature-heavy tone. “Madame wanted the yacht to feel feminine, romantic and linked to nature,” Nuvolari-Lenard’s Valentina Zannier told Robb Report. “It had to reflect their healthy lifestyle with a relaxing Zen quality.”

The grand view of the stern gives an indication that this yacht will be a head-turner on the inside.  Courtesy Moran Yacht/Guillaume Plisson

The design brief was clear; to use Quattroelle as the starting point, then make Ahpo “better, nicer, richer.”

With charter in mind, the PYC yacht also had to be able to accommodate 16 charter guests, 24 crew and staff as well as a fully commercial helipad and, of course, that all-important beach club.

A plunge pool and separate Jacuzzi decorated in turquoise mosaic and marble sit at the heart of the lower deck’s wellness area. The sauna and steam room share a Turkish hammam vibe with beautiful mosaic tiles, while a waterfall brings the sound of running water. This is the where the family relaxes, with 180-degree views to sea through the stern and side terrace.

The beach club, with its bar, lounges and mosaic hot tub, is one of the most magnificent on the water.  Courtesy Moran Yacht/Guillaume Plisson

Forward is a second guest lounge and an IMAX Dolby cinema, with twinkling LED stars set into the ceiling. Access to the amidships staircase, with its wraparound bronze balustrades, is via a glass corridor that runs through the gallery-like engine room.

On the main deck, formal dining for 22 and two drop-down balconies extend the wow factor. Adjacent, the formal salon—or tearoom, as it’s known—houses a grand piano. Unusually, the area between the salon and aft deck is occupied by a boardroom, though this also doubles as a smaller, alternative dining area for family.

The table features a vintage map of Jamaica inlaid in bronze surrounded by a blue resin sea to represent the owner’s half-Jamaican, half-Canadian ancestry. The Jamaican blue mountains are depicted in mosaic on the wall.

The heart of the yacht is on the owner’s deck, where the split-level, full-beam owner’s suite is decked out in pink and cream colors. Two ensuites—one pink blossom, the other black and gold—contain elaborate gold baths, showers and walk-in dressing rooms. Directly behind are the twin daughter’s suites.

The three family bedrooms share access from a central lobby. It’s on this level where the informal salon is found, along with a sweeping aft deck with al-fresco dining, sun pads, sofas and two bars.

The skylounge deck on the level above is where the owner’s panoramic winter garden enjoys all the cool blue views. A collection of plants brings a connection to nature and a jungle-at-sea ambience. This is the family’s sun deck, and the level above (occupying the top deck) has the full-beam bridge and captain’s cabin.

The Japanese-themed gym is one of the most technically equipped gyms found on any yacht. Large enough for multiple guests to work out in, it oversees a Jacuzzi and counter-flow swimming pool.

Lürssen employed stylish design throughout the build, from the elaborate aerial mast to the pink custom Carbon Craft tender. Featuring e-glass windows, a heat recovery system and an electric hybrid PTO/PTI system that improves fuel efficiency, it also works hard to be as sustainable as possible.

Following a maiden voyage that included a stop in the UK, the owners dropped anchor at the Monaco Grand Prix two weeks ago, before heading off on a Mediterranean cruising itinerary. For the weeks that the family is not on board, Ahpo will be available for charter with Moran Yacht & Ship serving as central agent.

Here are some other views of Ahpo.